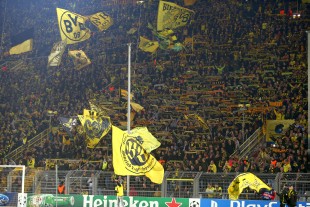 Borussia Dortmund have crucial weeks ahead. While in Bundesliga the clash against Bayern Munich is waiting in a couple of weeks, our boys have still some duty to survive Champions League group stage. Having been drawn into a group with Arsenal FC and SSC Napoli, it seems clear that one of these three teams won't play Champions League anymore next spring. All three teams had six points after three matches. But Borussia Dortmund was the only one, that was able to steal points on the road. The surprise 2-1 win in London brought Jürgen Klopp's boys into a comfortable position. Having still matches at home against Arsenal and Napoli was a big advantage.

Arsenal on the other hand was under pressure. While they reign their domestic league at this early stage of the season, the loss against Dortmund at home was a major setback. As Arsenal still have to travel to Dortmund and Napoli, they really are in danger of an early exit. Nonetheless Arsene Wenger's team is still pure quality. Having added Mesut Özil this summer really spoiled their offense. Real Madrid was stupid enough to let one of the best midfielders in the world leave Santiago Bernabeu. 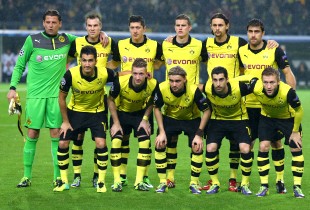 Compared to last weekend, when Borussia trashed VfB Stuttgart 6-1 at home, Jürgen Klopp made only one change. As Mats Hummels suffered from a minor injury Sokratis took his place. Together with Großkreutz, Subotic and Schmelzer he made up our flat four in front of goalie Roman Weidenfeller. Nuri Sahin and Sven Bender played in holding midfield, while Reus, Mkhitaryan and Blaszczykowski played behind sole striker Robert Lewandowski.

Arsene Wenger have to cope with some injuries. German national striker Lukas Podolski is still missing. And also Oxade-Chamberlain, Walcott, Wilshere and Flamini wasn't able to make the trip to Ruhr Valley. So keeper Szczesny was guarded by defenders Sagna, Mertesacker, Koscielny and Gibbs. Ramsey and Arteta played in defensive midfield. The offense was packed with Rosicky, Özil, Cazorla and striker Giroud.

In front of 65.829 spectators in sold out Westfalenstadion Borussia Dortmund early took command. Kevin Großkreutz initiated BVB's first attack. In minute 4 he found Reus in the box, who set up for Lewandowski. The Poland national was finally blocked six metres in front of the goal by German national defender Per Mertesacker. About ten minutes later a freekick form the left side sailed into Arsenal's box. Defender Neven Subotic got his foot to the ball, but his approach was wide by half a metre. Arsenal was still struggling to get into the match. Arteta in holding midfield tried to break down Borussia's attacks and was booked in minute 23. 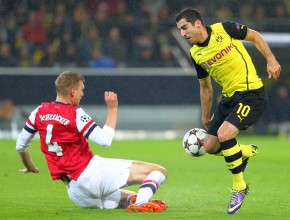 A couple of minutes later Borussia Dortmund raised the pressure. Reus setting up for Großkreutz. BVB's right back play a high pass to Blaszczykowski. The Poland national team skipper's shot missed the goal by several metres. But while Borussia Dortmund was still in control, there weren't many chances to score. On the other hand Arsenal really had no approach and so Roman Weidenfeller had a quite evening until no. In minute 36 Robert Lewandowski was fouled by an Arsenal player. Arteta was heavily complaining despite having one yellow card already. Referee Kuipers could have booked him for a second time for this, but the Spanish midfielder was lucky in the end.

Seconds later Borussia Dortmund had their best chance in this first half. Lewandowski with a fine pass to the right side to Blaszczykowski. The right midfielder made a fine pass into the middle, where Mkhitaryan was waiting in front of the box. The Armenian national pace direction Arsenal's goal and had every option score. Unfortunately his shot passed the left post on the wrong side. Then before halftime Robert Lewandowski had a last shot from outside the box, but he missed the goal by one metre.

Neither Jürgen Klopp nor Arsene Wenger made any chances. Borussia Dortmund now really tried to raise the pressure. It was again Kevin Großkreutz who paced down the righ side and played a neat cut-in into Arsenal's box. Unfortunately no Dortmund player was waiting there. Three minutes later Bender played a high pass into the box. Marco Reus fired a fine header direction Arsenal goal and it needed Scszesny's best to save this one. Reus' next attempt hit the net - but was offside. Blaszczykowski's shot was cleared by Arsenal's goalie and Reus took the deflected ball and scored. But cleary this was an offside position. 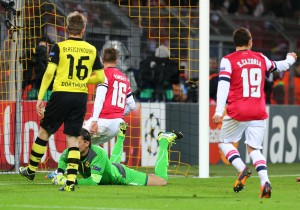 Nearly one hour was played and Borussia Dortmund had a shots on goal statistic of 10:0 - really impressive but still nothing more. And as everyone kows - when you don't score the opponent will do for sure. Former Dortmund midfielder Tomas Rosicky got the ball about 25 metres in front of BVB's goal. His pass found Mesut Özil on the right side. Özil with a fine high cut-in to Giroud waiting in the box. The French striker didn't try to score from this difficult position but headed the ball to Ramsey, who was waiting 7 metres in front of Weidenfeller's goal. Subotic wasn't able to defend Ramsey and so the Arsenal midfield finally hit the net - 1-0 Arsenal!

Really a major setback for our boys. They tried to raise pressure even more but by this also allowed Arsenal to play some fast counter-attacks. And it was again Aaron Ramsey who tried to score. A long ball found him on the right side of BVB's box. His shot from short distance was cleared by Weidenfeller. And then the following corner kick nearly resulted in Arsenal's second goal. Giroud took a shot that was cleared by Sahin on the goalline. Only minutes later Mertesacker tried to score by head, but his approach was wide. 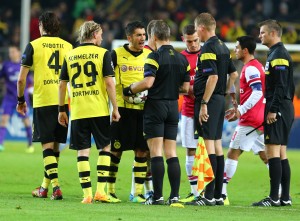 15 minutes from time Jürgen Klopp tried some new players. Aubameyang and Hofmann entered the pitch instead of Bender and Blaszczykowski. But again the next arouser was in Dortmund's box. A high cut-in was on its way to Koscielny but Roman Weidenfeller jumped out of his goal. He missed the ball but knocked down the Arsenal defender. Really no one could have complained if Kuipers would have given a penalty. Jürgen Klopp threw in another striker. Julian Schieber got some minutes to show what he can do. Marco Reus had to leave the pitch.

But there were only two more exciting moments. In minute 90 Robert Lewandowski missed by head. And really in the last seconds it was again the Polish striker who was in middle of the action. A long pass found him in Arsenal's box. Lewandowski tried to fire shot but was disturbed by Per Mertesacker who pull him on his left shoulder. A really difficult decision. Kuipers didn't blew his whistle - no penalty for Dortmund. Borussia's players were in a fury but this was really the last happening on the pitch and the evening ended with Arsenal winning 1-0 in Dortmund.

Dortmund not only lost this match but also his comfortable position in Champions League group. As SSC Napoli won 3-2 at home against Marseille, BVB is now in need of teo ins out of two matches. A difficult task, but not impossible. In Bundesliga Wolfsburg is waiting on Saturday on the road.

Jürgen Klopp: "I told the team what everybody could see. We weren't paid off for the effort. It was unnecessary to lose this match. But we still have every chance to proceed. It only becomes more exciting. We didn't score the first goal and received one with Arsenal's first chance."

Arsene Wenger: "Dortmund showed a great fight and really pressed us into our own half. But finally we scored. We played in a mature way and didn't make big mistakes. But after leading 1-0 we greated even some chances to score a second one."