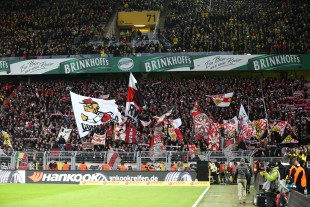 German football has probably the most wanderlusty fans in the world. Three days ago, a Sunday afternoon match, more than 6,000 fans from Stuttgart supported their team in Dortmund. Most of them had to travel more than 800 kilometers both ways to see their team. Similar figures a week ago when we played Hamburg and had around 8,000 Dortmund fans cheering at the Volksparkstadion up in the north.

All this is based on two fundamental points:
1 – German fans are willing to travel for their football team
2 – every away team is granted 10% of all tickets sold

In December 2012 a vote took part in order to make the football safer for fans. This is not a joke – with a massive scaremongering and the influence of a lot of lobbying parties the German football association and the teams were forced to come up with ideas for ensuring the safety of the fans. As if it wasn’t ensured before. Just to make it clear: The chance getting injured at the Oktoberfest is a lot higher. 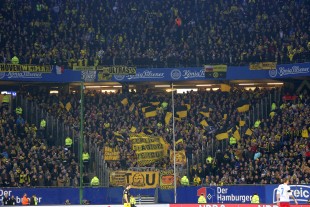 The facts were of no matter as football was the more prestigious topic. The negotiations and the vote were accompanied by protests in the stadiums where fans were staying quite until 12:12 mins as the vote was dated for the 12th of December. An impressive silence was showing how football without fans or with a crippled fan culture looks like – a funeral.

Now, three years later, football has again become a topic at the Innenministerkonferenz (conference of ministers of internal affairs of states and federal) because of what happened in Paris and Hanover. As costs for the work of policemen and policewomen are on the rise and there is no legal chance to put these costs on the clubs, politics are using the terrorist attacks and a perceived increase in football crimes to regulate the percentage of away tickets. According to the inner circle of the conference, the boycott of the Schalke fans at the derby showed that less away fans cause less trouble. Although this might be true in some cases, the derby cannot be seen as a role model. Mostly, certain groups are responsible for crimes during match days. These groups were not attending the derby because of the boycott. It is obvious though, that limiting away tickets would not hit those groups as they have mostly away season tickets but the vast majority of ‘normal’ fans. This would cripple our fan culture!

Although it is highly arguable that a regulation would have a legal basis it is necessary to make clubs and the football association aware that this is not in the fans’ interest. We want colorful and crowded stadiums and hopefully, the football does not have to bow to the ideas of some politics who have probably never attended a football match.