Draw of no importance 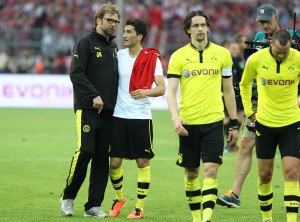 In a match more intense than expected, the reigning champion Borussia Dortmund achieved an in the end satisfying draw against the upcoming champion and Champions League final opponent Buyern Munich. Despite the absent importance caused by this fixture at this time of the season, both teams did show what this matchup is really and will always be about: prestige. And like so often in the last couple of years, they offered much excitement to the audience. As a final rehearsal before Wembley, both squads showed a passionate performance without really giving 100%. And although the personnel rotation was given on both sides, it was obvious that the long season filled by a lot of midweek matches left its marks.

As expected, both coaches made use of their well-staffed bench after the exhausting matches in Spain under the week. In the Dortmunder defence, Santana could once more take Hummels position in the centre, additionally, Kevin Grosskreutz started on the right wing for Lukas. In the defensive midfield, Kehl substituted Bender who returned from Madrid with a minor injury. Sahin went to the centre position for Mario, who will most certainly use the time until Wembley to regenerate his torn muscle. Kuba and Lewandowski completed the offensive midfield and Julian Schieber was given another chance as nominated forerunner.

The mighty boys from Munich also rotated in their starting formation. Rafinha, Contento, Tymoshchuk, Luiz Gustavo, Pizarro, Shaqiri and Gomez played right from the beginning, Schweinsteiger, Robben, Ribery and Lahm were not even nominated. Müller and Martinez remained on the bench. 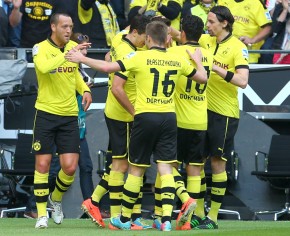 Right from the starting whistle, Buyern took over the initiative. Over ball possession they tried to find a way through our defensive line. Dortmund answered with a primarily compact formation, waiting for their chances to quickly counter attack. As a result, the first ten minutes were characterized by a tactical play and a lot of duels in the midfield. Pizarro then finally found a gap, sending Shaqiri with an opening pass along the right wing. The Swiss guy luckily misjudged the superior situation and tried it with a shot instead of crossing to the already waiting Gomez (9.). The immediate answer from our Borussia: Sahin with a beautiful long opening ball to Kuba on the left wing, Kuba with overview saw Grosskreutz approaching the second post and Kevin perfectly nailed Kubas cross volley under the crossbar. 1-0 for our Borussia (12.). And Dortmund continued the pressure. Gündogans one-two with Sahin let him approach Neuer freely. He could only be stopped with a light push by Contento from behind. “Penalty”claimed by 76.000 voices, referee Gagelmann however saw it differently. Definitely not an uncontroversial scene in which Buyern could not complain about a penalty whistle (14.). However, double whammy for Borussia: Gündogan felt his right thigh in this scene and for safety reasons got substituted for Moritz Leitner (14.).

The tactical formation from the starting phase was meanwhile more scattered. Buyern was now challenged and Dortmund did not want to rest on their lead. The equaliser then basically from out of nowhere: Sahin didn’t properly attack Rafinha on the right wing, leaving him plenty of time for a nice cross into the box where Subotic had his afternoon nap. Gomez consequently completely free with no problems to easily head the ball in (24.). 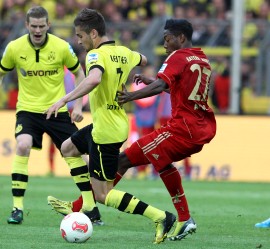 Lewandowski with his first promising scene after half an hour. With nearly endless confidence he went into the box and passed van Buyten and Boateng. But his shot from sharp angle could barely be saved by Neuer for the cost of a corner (31.). Both teams then geared down and went back to their initial tactical formation. Buyern with ball possession, Dortmund with a good defensive organisation. Gustavo with a booking after a foul to Schmelzer a few meters before the box, but the following free kick by Sahin just hit the stands (39.). Alaba on the other side in the same situation with the same result (42.). Shortly before the halftime whistle, Roman once more proved his excellent current shape: Gomez passed Schmelzer in the box after being served by Alaba, his shot from 10 meter distance was then brilliantly saved by Roman with his foot (44.) - halftime.

Both team returned without any personnel changes on the pitch and right away, the next controversial scene: Subotic hit Pizarros leg in the box, but again no penalty whistle blew - retribution (50.)! The game then started to lose class. A lot of bad passes, inattentiveness and overhasty actions overshadowed the next couple of minutes, no wonder that another referee decision had to serve as a highlight: Sahins shot hit Boatengs upperarm as he tried to block the ball. Again a difficult situation for the referee, but finally the penalty whistle sounded. No question that the most confident player overtook the responsibility. And although the penalty was a strong shot in the bottom right corner, Manuel Neuer showed why he is our national number one with a brilliant save (60.). Santana received the following corner, but his header went a few foot above the crossbar (61.). 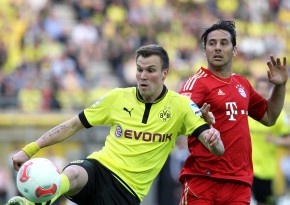 After a tackling against Schieber, referee Gagelmann showed Rafinha the yellow card. Only a few minutes later, Kuba and Rafinha had a running duel on the left wing. Both collided at high speed, Rafinha however with his elbow ahead. Kuba went to ground and a mass confrontation started. After ref Gagelmann could smooth the tempers, he consequently showed Rafinha his second yellow card and sent him off the field (65.).

20 minutes against 10 Buyern players ahead, coach Klopp strengthened the offensive and sent Reus for Kehl on the pitch (70.). Borussia now increased the pressure, trying to force Buyern to failures. Munich on the other side with a deeper, more compact formation waiting for possibilities to counter attack. Schmelzer directly forwarded a bad pass from Can to Schieber into the box, unfortunately Julian could not process it properly and was then forced back by van Buyten (78.). Dortmund however did miss a clear offensive structure and creativity. High and long balls were the only method against the Munich defence. Unable to create chances, a corner kick by Reus should be the last mentionable situation in this game. The header from Sahin missed the left post and referee Gagelmann accurately blew the final whistle (90.). 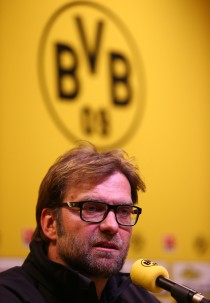 For both sides, a fair share of points. Against 10 Munich players however, it should have been possible to create more pressure and offensive power. It was recognisable that our boys did not activate the last percentages that were needed for a top performance, comprehensible for a match with no real importance. In addition, the early substitution of Gündogan and the absence of Götze showed how important both players are for our offensive play. In the end, Buyern could have been defeated this day, a feeling that should give some confidence for the upcoming final in Wembley. With all our black and yellow boys in a healthy shape, we certainly can expect football in perfection and an epic evening.

The match was accompanied by some controversial situations in which the Bavarian complaints department got into top gear. Last week, Real Madrid showed how an intensive and hard playing style could intimidate our young players. It is obvious that elbows, kicks and simply hardness can be an effective method against our technicians, who were always trying to win their matches by playing superiority. This is certainly also a question of experience, especially on an international level. To speak in my behalf, I don’t want to see our guys playing like this. I like the way we win our games and I don’t want to see our guys playing as unfair as e.g. Rafinha or Sergio Ramos. But Buyern will desperately try to win this trophy, no matter what needs to be done for that. Let us just hope that our boys will always find the appropriate answer to their provocations, however this answer will look like...