One day later - No we didn?t dream this! 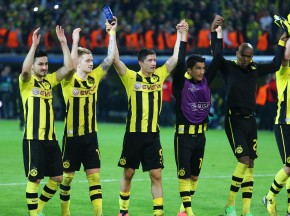 Let me help you paint a picture, my fellow Borussia fans, let me help your mind to linger in the past and feel the joy of the last 90. minutes of football that we just witnessed a few hours ago. A whole stadium covered in black and yellow. Chants, well known to us, sung by man and women, standing arm in arm, echo down on the field. Players getting cheered onwards to do their best and players pushing themselves to their limits to deliver us a feast of football!

You’ve got the picture again? Good, because what I will write now can’t include the little details only you saw, the little things that only happened to you while you watched the game, be it in the stadium, in a bar, or at home with your fellow Borussia fans. The little things that you will have to add to my text while u read it, when Götze made one of his sweet chips, or Lewandowski scored another goal! To make this, as it was for me, one of the greatest games I ever saw! 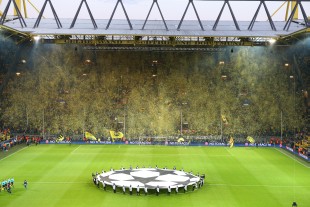 Dortmund’s starting eleven didn’t include any surprises. Bender played besides Gündogan and Hummels paired up with Subotic. Of course Götze was starting as well, even though Klopp wasn’t sure if he could deal with all the pressure, the team was there to help him. I will come back to that topic at the end of this match report. Jose Mourinho started with Modric at the center instead of Di Maria, most likely because the latter just arrived on Wednesday, and Özil therefore had to play on the right wing.

But let’s get into the game. Our Boys needed 5minutes to reason out that this was their day. Bender seized the ball from Khedira and served it to Marco Reus who triggered the turbo and ran 30 meters to the penalty area then rushed past 3 Madrid players, of whom no one could stop him even the slightest, and 12 meters in front of the goal he aimed for the lower left corner, but Diego Lopez parried the well placed ball (6.). 2 minutes later Götze got the ball at the left flank, kicked it high and sharp into the penalty area, where Lewandowski ran free of Pepe at the second post and struck the ball into the net (8.). With the 1:0 lead Dortmund controlled ball and opponent in every way, but sadly failed to deliver the second goal. Of course this had to be punished, as it so often happened for us in this season. Real Madrid, who only came close to our goal with free-kicks, took advantage of a very poor mistake of Mats Hummels. Something that looked like a return pass to Weidenfeller was intercepted by Higuain; he passed it on to Ronaldo, who just had to put the ball into the empty goal. But let’s get into the real deal; the second half is waiting for us! Second half, 5 minutes into the game, Reus fires the ball into the penalty area, Lewandowski gets it, makes a 180 degree turn and snipes the ball over the line (50.). 10 minutes later, Schmelzer delivers the ball into the box which is deflected to Lewandowski and what now happens is something I can only describe as a beautiful dance, a little masterpiece created and performed by Robert, resulting in a brilliant goal (55.) that we will see in every montage about football from now on! If you haven’t seen it, go watch it, NOW! The first 10 minutes of this second half were magic for every Borussia fan, but it didn’t stop with this 10 minutes. I can’t explain what happened, but I am quite sure that we saw the best 45 minutes of our Team, at least that I have ever witnessed. The team was intoxicated kept pressing, kept going for another goal. It felt like the Real Madrid Players were just watching in awe when Gündogan took the ball swept past 2 poles, which were trying to look like Real players, then played “Blind man’s bluff” with Ramos as if it’s nothing and finished off with a hammer of a shot that got barely saved by Madrid’s keeper Diego Lopez, we record the 62. minute mark. Only 4 minutes later it was Reus who did let us scream in excitement once more. Götze got the ball and chipped it beautifully to Reus, who was in the penalty area and went for goal, but Xabi Alonso fouled him quite clumsily, penalty. I suppose you all know who took the shot and “wow” did he take it. Robert Lewandowski with all his courage, all his confidence (resulting from 3 goals) and all his might slammed the ball into the net, Lopez looked quite happily that he dodged that one. 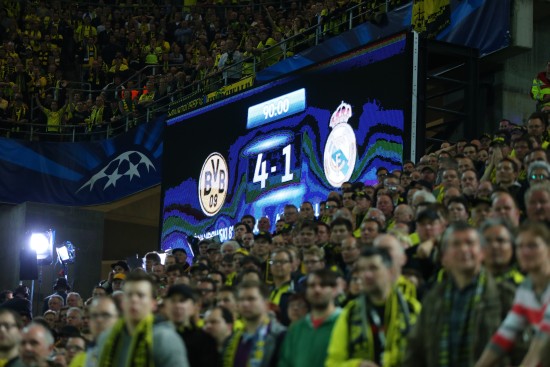 The game was a party for every Borussia fan. It already was a blast for every football fan, but now it was a joy for every man, every woman, every child who was dressed in black and yellow. Because our boys didn’t stop there, even after leading with 4:1 they kept going and Real Madrid had nothing to answer. And as the final whistle fell there was a smile in everyone’s face. After what happened in Malaga, the ecstasy and thrill we felt after winning this match in the overtime, something I will never forget, we were now presented with a different joy, a feeling of pure happiness, a lightness, as if a burden was lifted from us. We did it, our boys did it. We showed everyone out there, like our coach wanted us to, that Borussia Dortmund, stands over all and is not defined by the press, not defined by a single player, not defined by a single fan, not defined by tomorrow or yesterday, but defined in the here and now, defined by all of us, the players, the coach, the best fans in the world, standing together as one even in difficult situations to achieve the best and only the best for our true love and only club, Borussia Dortmund! These last words come from my hearth and you all know that they are referring to the uproar that was caused by the transfer of Mario Goetze to Bayern Munich and the plead of Jürgen Klopp that we have to stand as one now more than ever! And that’s exactly what we did! I wasn’t sure about all this myself; would Götze be booed at as soon as he gets the ball? Would there be negative chants against him? Because at first even I felt betrayed by him, I felt a lot of anger against Bayern Munich, those money throwing bastards. But after watching the press conference with Jürgen Klopp and by trying to understand the reasons for Götze to make this step, I came to a peace with his decision. A peace that came from the knowledge that my club, our club, would keep going on, a certainty that matured from the great work of Hans-Joachim Watze, Michael Zorc and Jürgen Klopp. An assurance deepened by understanding that we, the fans, will never change, will never leave, will always be there.

We will lose more players in the future, Robert Lewandowski is on a jump, it’s not clear if Santana will stay with us, maybe even Mats Hummels or Blaszczykowski will leave us someday like Nuri Sahin and Shinij Kagawa did. Maybe some of them will come back; maybe some of them will be better off without us. But let’s just live and enjoy the here and now with these great players, with this unique coach and I can’t think of a better time to do exactly that!