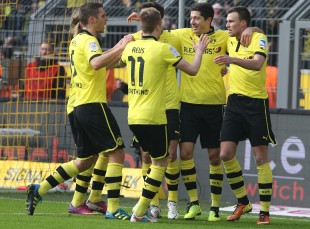 After the depressing national cup knockout under the week against Bayern Munich, the range of possible achievements for our Borussia became even smaller. A safe second place in the league as well as a victory against Donezk upcoming Tuesday is now the last thing to accomplish for our black and yellow boys. Against Hanover, the squad of Juergen Klopp reacted properly after the defeat in Munich and played a powerful offensive game. After 90 minutes, they sent the players of coach Mirko Slomka with 3-1 goals back to the Lower-Saxony capital. Now, the total focus lies on the upcoming Tuesday when Donezk will be our guest in the rematch of the round of last 16 in this year’s champions league tournament. With the performance from yesterday, the confidence of our boys should have been grown sufficiently to kick the Ukrainians out of the tournament. Let’s see exactly how they did it… 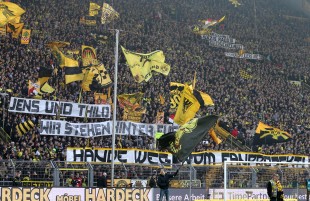 Before the important champions league match, Juergen Klopp changed the starting formation in order to give some players the chance to rest. Bender, Piszczeck and Götze had to remain on the bench and take a break. Mats Hummels, who also had to pass the match against Munich at short notice, had a lay-off pause as well. Quite unexpected and even more pleasant was the decision by the DFL to shorten the ban of Lewandowski from three to two games. He started together with Julian Schieber as forwards in a 4-5-1 with Robert as hanging striker. Kehl replaced Bender in the central defense and Kevin started in the back four on the right wing behind Kuba.

Borussia left the dressing room with a lot of power and offensive drive. It was noticeable right away that the defeat against Munich should have been the only one this week. With continuous pressing, Hanovers defense line was under pressure right from the kick-off whistle. Gündogan with a good pass through Hanovers back four that was received by Reus. Ball processing and shot in one motion, but it went over the goal (5.). One minute later Reus with a ball back to Schmelzer on the left wing, the direct cross was taken with a powerful volley by Kuba that missed the crossbar closely (6.). The BVB continued over the strong right wing with Kuba and Grosskreutz. One minute later, the early offensive efforts were rewarded. Kuba to Kevin who sprinted through to the base line. The flat cross reached Lewandowski on the penalty spot who finished off humorless. 1-0 by our Polish striker (8.). 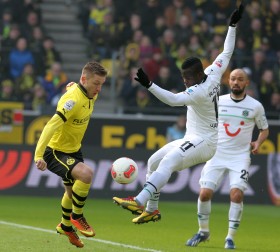 After 15 minutes, Hanover with their first promising chance: Pinto on the right with a long, opening flat cross to Rausch in the central who shot directly leaving Roman no chance to save. Luckily for our Borussia, the referee assistant raised his flag and the offside whistle sounded… a close but acceptable decision (15.). On the other side it was again up to our BVB to raise the noise in the stadium. Once more over the right wing: Kuba to Grosskreutz, Kevin with a flat shot from 16 meter distance, Hanover Keeper Zieler spilled the ball directly to Lewandwoski who made his forth double score of the season (21.).

Hanover had no proper answer to the tactic of Juergen Klopp with Schieber and Lewandowski in the offense. Latter, acted mainly in the central midfield as a classical 10. His dangerous attempts into the box when the right or left wing was pressing forward did definitely contribute to both goals. After this early 2-0 lead, it seemed like it would be an easy afternoon for our black and yellow squad. However, instead of continuing the controlled offence, a blunder by Santana helped Hanover to get back into the game. Pinto with a free kick from the mid lane into the box, Ya Konan with a header that could be easily picked up by Roman, Santana however tried to forward the ball with his head to the already approaching Weidenfeller. Surprised, Roman could barely push the ball against the crossbar and Abdellaoue gratefully accepted the invitation by heading the second ball into the net (41.). Due to the fact that Dortmund totally outplayed his opponent in this first half, Hanover could be happy that the BVB was only one goal ahead.

Hanover had a better start in the second half. A more narrow positioning in front of their box made it harder for Dortmund to build up their game. Then a wonderful pass from Subotic into the path of Lewandowski. Lewa passed Djourou with a lob and closely missed target with a flat shot (53.). Now, both teams had a number of chances that showed that Borussias dominance had ended. Hanover sought for the equalizer. Another long ball from Subotic to Lewa. Robert could forward across to Reus but decided himself once again for a lob that could be easily saved by Zieler (60.). In minute 64. the rest time for Götze ended. For him, Reus had to leave the pitch. And Götze showed right away in which awesome shape he currently is: after a nice solo he also tried the lob against Zieler, leaving the Hanover goalie no chance… but defender Djourou ran through and cleared the ball on the line (68.). 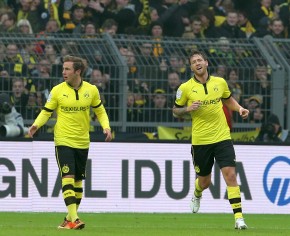 Now Santana with a long game opener that was received from Schieber and directly forwarded to Kuba. Schieber with high pace into the box got the ball back from Kuba and finished off this combination for his first season goal for Borussia (72.). Bender now substituted for Kuba who participated in all three goals today (76.).

Hanovers offensive efforts now lacked the last consequence and will, knowing that a two goal deficit would be most unlikely to catch up. Another unnecessary turnover from Santana however initiated a proper chance for Hanover, Felipe could only solve the situation with a foul in front of the box. The followed free-kick was luckily without any danger (80.). It appeared that Dortmund was now willing to protect the lead to the end. Another nice counter attack via Sahin (who came into play for Gündogan) and Lewandowski (83.) as well as a free kick by Sahin in the direction of the second floor of the stand (86.) would mark the last two mentionable scenes in this match. 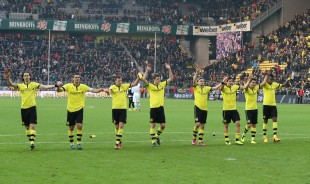 Borussia defeats Hanover legitimately with 3-1 goals. And yet, Dortmund especially missed it to extend the lead with one of the numerous chances in the first half so that at least after the beginning of the second half the match was an open clash. The personnel rotation by Klopp with Schieber and Lewandowski as well as Götze and Bender on the bench worked well. Even Subotic proved a development in the game build-up with a few nice long passes to our forwards. With the victory, Dortmund secured the second place in the league. As already mentioned, the whole focus will now lie on the upcoming champions league match against Donezk this Tuesday, before Dortmund will face rival**** 03+1 in the Ruhr-Derby next weekend. Did I say two aims left in the headline? Let me correct myself - three aims left: Second place, Champions League Quarterfinal and Derby Victory!