Simply one of these days... 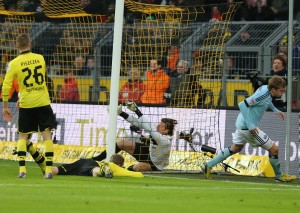 ... when worst comes to worst. In a dramatic match, Borussia succumbed Hamburg with 4-1 goals. A result, that indeed sounds more clearly then it really was. It was just one of these days where nothing seemed to happen in favour for our Borussia. Starting with the early deficit of 2-1 after a heart shot from Son, followed by a red card for Robert Lewandowski and the brutal efficiency of Hamburgs counter-attacks. In the end, although it hurts to admit, the victory for Hamburg was a deserved one. What remains is an uneasy feeling before the champions league match in Donezk in three days and the certainty, that some of our players cannot be replaced.

Dortmund had a good start into the second half of the season. Last weekend, we could overtake Bayer 04 Leverkusen to obtain rank two in the table right behind Munich, which is still out of reach. The Hamburger SV had an average start with four points out of three games. Anyway, the boys of Juergen Klopp should have been warned, since it was up to Hamburg to defeat Borussia 3-2 in the first half of the season and to end the record breaking streak of being undefeated for over one year. 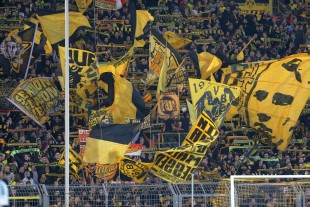 In personnel matters, both teams were stricken. On Borussias side, Schmelzer, Piszczeck, Götze, Reus and Weidenfeller were not in their best shape, also Gündogan and Subotic have not been at 100% during the week. On Hamburgs side Lam, Badelj, Mancienne and Ilicevic as well as Sala did not join the trip to Dortmund. As a consequence, Klopp had to do some adjustments to the starting formation with a few surprises. For Schmelzer, Sven Bender was seeded as left-wing defender. Gündogan remained on the bench, for him, Sahin had his starting formation debut next to Kehl in the defensive midfield. Götze and Reus could also field after their intermezzo in the national squad against France under the week. Hamburg coach Fink decided to send Skjelbred for Arslan on the pitch, Badelj, who was suspended for his 5th yellow card, was replaced by Rincon.

Right after the starting whistle, it was noticeable that this match wont be a walk in the park. Hamburg seemed to remember how the fast BVB offensive line around Götze, Kuba and Reus could be defeated - with a well-structured and organised defense, with intense pressing and hard but not unfair tacklings. Consequently, Dortmund had his problems in the beginning with a lack of pace and precision in their offensive efforts. Hamburg on the other side switched quickly from defence to offence after ball possession to pressure the already not well-practised defence line around Bender, Hummels, Santana and Piszczeck. 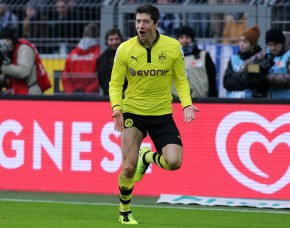 Hamburg managed to keep the BVB defence busy - Dortmund needed 15 minutes to create the first real promising opportunity: Piszczeck with a beautiful lob from the sideline directly to the forward pushing Götze, who controlled the ball with his chest, dropping it on his right foot, but the subsequent shot from closed distance missed the goal by a few centimetres (15.). A disagreement in the Hamburg defence then provided the lead for Dortmund. A long ball from Hummels that was intentionally for clearing purposes reached Westermann. The Hamburg defender however underestimated the situation and did not see the sprinting Lewandowski approaching his back. Lewandowski took the ball and quickly passed keeper Adler to finish off for an easy and at this time not really expected 1-0 lead (17.).

Unfortunately, the joy about this goal did not last long. With the first attack after kickoff, it was Jansen with a perfect pass into the box to Aogo behind the defence line, who forwarded the ball with a flat cross to Rudnevs for the equaliser (18.).

Shortly after, even the possibility for Hamburg to take the lead: Son onside because of the slowly pushing up Piszczeck could freely approach Roman and luckily only hit the post from sharp angle (21.). A few minutes later he made it better: After passing Hummels and Bender on the right wing, Son approached the box and curled the ball from 18 meters and a sharp angle into the net right beside the far post, leaving Roman not a single chance (26.). 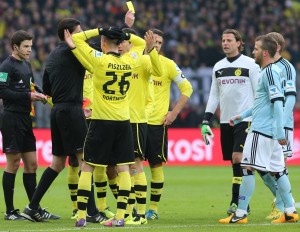 It was then an open, intense game. Lewandowski with the chance to equalise after a pass from Götze, but the shot was too easy to save for Adler (29.). What followed next can be considered as one of the key situations of the game. Lewa with a hard kick against Skjelbred in the midfield as he missed the ball when both were trying to get it. Skjelbred went to the ground. Wrangling, player crowd and little pushes then followed. After over one minute of consultation with his assistants, referee Gräfe showed Robert the red card, leaving him behind with a big question mark on his forehead. Of course the tackling was hard and Robert did only hit the leg of his opponent, the situation and the followed decision of the red card however was at least very discussible (31.). With only 10 players left on the pitch in that early stage of the match, a 2-1 deficit and losing the best striker in the team, Dortmund would have a hard time to keep the points at home. Now, it was even easier for Hamburg to interrupt Dortmunds offensive efforts and to counter attack more efficiently against a depleted yellow squad. Approaching the end of the first half, Dortmund could generate a slight domination, but serious opportunities were still missing. Shortly before the whistle, then nearly the equaliser for Dortmund: Piszczeck on the right wing with a cross to Kehl on the penalty spot who had a try, the ball bounced back to Reus who passed back to Piszczeck finishing off from short distance. Unfortunately, Reus was offside... (45.)

Without any adjustments, both coaches sent their teams back on the pitch. Lucky for Borussia, Santana got off easy after a tackling in the box against Jansen (50.). Hamburg now sought after ball possession and tried to double Dortmunds ball carrier. Aogo received a cross from Jansen into the box and missed the goal slightly. The defence of our Borussia remained vulnerable (53.). Dortmund vice versa with a lot of high balls and without the fast, flat combination football that we were meanwhile so used to see. 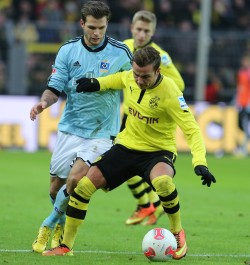 After a corner kick by Reus, Hummels received the second ball via detours, trying to lob it over Adler and unfortunately only hit the outer top of the net (56.).

Then Gräfe decided to equalise the player count on both sides again: A pass out of the midfield breaked the Hamburg defence open, Reus, quickly as he is, could only be stopped by Bruma with a cynical foul - red card! (59.). Pushed forward by the atmosphere of the stadium, both the squad and the audience felt new hope that this match was not over yet. This motivation however was killed quickly by Hamburg: Van der Vaart on the left wing with a cross to Rudnevs that both Santana and Hummels could not clear - double score for the Russian striker, 3-1 deficit for our Borussia (62.).

Juergen Klopp reacted and sent Gündogan and Schieber for Kehl and Piszczeck on the pitch (66.). Dortmund with a slight advantage as Gündogan tried to take over control, but the last efficiency, the last deadly pass was still missing due to the passionately fighting and well-organised Hamburger defence. Hamburg on the other side remained dangerous with their fast counter attacks (70., 72.). 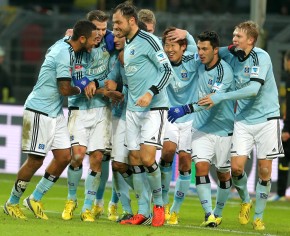 Hummels, who joined the offensive more often now, cant finish off against Adler (73.). Kuba with a nice cross from the right wing to Santana, who sprinted behind the Hamburger defence and artistically had a try from close distance but sent the ball into the audience (76.). Dortmund now beleaguered the Hamburg box and pushed Hamburg in the defence. Mario and Marco however remained unlucky (80., 83.). The far moved up BVB defence then paid the price. Jansen with a cross to Son after passing Kuba and Bender, the Korean striker finished off easy for the 4-1, giving Dortmund the rabbit punch (89.). After Rudnevs could nearly extend to 5-1 (90.) but missed the goal, Gräfe did end the match after 3 minutes additional time. 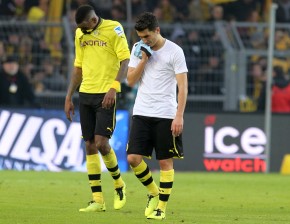 Hamburg defeats Dortmund with 4-1 in the Westfalenstadion. Hard-earned. Dortmund did not come into play properly and the dismissal of Lewandowski did the rest. The squad was not able to compensate the missing Lewandowski; also Gündogan seems to be unreplaceable for us. Dortmund did not play good, in addition, Hamburg played concentrated and fought hardly. The Dortmunder midfield around Sahin in the centreal defence and the creative centre around Reus and Götze could not unlock their full potential. The anyhow already decided championship is now even clearer. Luckily for Borussia, also Leverkusen left two points in Gladbach and did not re-obtain the second place. For Kloppo and our black and yellow boys, the whole focus will lie on the upcoming Wednesday, when Borussia will have to play in Donezk. Lets just forget this match against Hamburg quickly - those days happen from time to time - and lets hope that we will find back to our old strength that earned us so many respect from the European football audience last year.

Audience: 80.645 in the Westfalenstadion