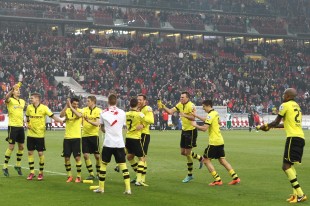 Well. It is no big news that Borussia Dortmund has some problems and challenges around the bookings in the Champions League this season. The away match in Stuttgart on Saturday made no difference since it was another hard-fought match. While the German media ran wild because of the possibility that Bayern Munich could become the first team to win the league already in March, Borussia kept calm and secured the second rank in the table with a 2-1 (1-0) victory in Swabia. In retrospect, the already mentioned "hard-fought match" was used in its literary meaning since Stuttgart seemed to have prepared for war... and brought it to the guys in black and yellow.

After the annoying break because of the national appearances, the Bundesliga returned and Borussia presented a surprising line-up. Lukasz Piszczek who has still problems affecting his hip and will need surgery sooner or later, was set to get some rest after having played twice for Poland, so Kevin Großkreutz took his place as the right defender. 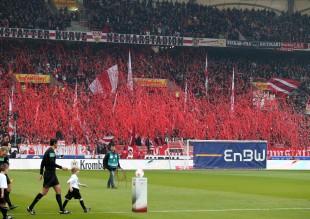 Kuba was the second Pole to miss the match in Stuttgart because of a minor injury he suffered during the warm-up for the national squad. Therefore, Mario Götze picked up the spot on the right midfield side, with Marco Reus on the other side and Ilkay Gündogan as the man behind Robert Lewandowski. The double-six was formed by Nuri Sahin and Sven Bender. Stuttgart on the other hand missed several players as well. Bruno Labbadia had to replace Kvist and Molinaro due to their fifth booking and therefore could not rely on the same team that played in Stuttgart's last Bundesliga performance. However, it has been over a year since Stuttgart played two back-to-back Bundesliga matches with the same starting eleven.

Stuttgart started off pretty good but it was Borussia who had the first chance to go for the lead after ten minutes when Sahin's nice pass from the midfield was extended by the heel of Robert Lewandowski which brought Marco Reus to appear in front of Stuttgart's keeper Sven Ulreich who, however, got the better of it and saved the ball because Reus got no possibility to gain control over the leather. T 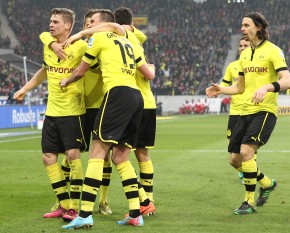 wo minutes later, it was Vedad Ibisevic who headed the ball into the goal of the German double winner. Luckily enough, he was off-side so that referee Aytekin had no option than to call it off. Still 0-0, but Traoré had a big opportunity just seconds later when he appeared in front of Roman Weidenfeller who hesitated for a long time but was right to do so cause he was able to secure the finisher of Traoré and to prevent Stuttgart from being in the lead here after a few minutes had been played. Opportunities arose on both sides of the pitch so that the next team to go for the lead was Borussia. Again, it was Marco Reus with a nice lob from the right side, but he missed the goal for just a few inches (19th). At this time, everything concerning fair play and roughness was fine, but it changed three minutes later. A free kick from the right side was set to find Austian forward Martin Harnik, but Marcel Schmelzer was there to clear the ball with a header. Unfortunately, Harnik's foot was there as well and therefore, the Austian hit Schmelzer directly into his face and broke his nose. Of course, things like that could happen in a game and it would be wrong to say that Harnik did in on purpose. However, Harnik was booked, Schmelzer was sent to the hospital and Piszczek was brought in. A decision which turned out pretty good for Borussia eventually, because a few minutes later, Piszczek brought the lead for his team. Before, Lewandowski should have been awarded a free kick on the left side because a Stuttgart defender hit his face in a tackle. The match continued and BVB got a throw-in even though Lewandowski was the player who hit the ball last. Call it retributive justice. The throw-in lead to another free kick which was brought in by Marco Reus. Piszczek extended the cross into the goal and Borussia was up front in minute 29. Of course, Stuttgart found its scapegoat in referee Aytekin now after he called off a goal for Stuttgart and awarded the doubtful throw-in for Borussia. The match got more and more nasty over the next minutes and until half time, no big opportunities could be seen on the pitch.

Just like in the first half, Borussia started the second one with an opportunity when Götze assisted Robert Lewandowski who got the ball in front of the goal and wanted to finish, but his shot was blocked by a defender. This could have been a really good opportunity to double the lead (55th). The block then found Nuri Sahin but Niedermeier blocked this one as well. However, Stuttgart never was out of the match and everybody in the stadium thought to see the equalizer in minute 58 after a corner kick from the right side. Maxim brought it in and Mario Götze proved that it is important to have a player standing right beside the post because he was able to clear the ball inches before the goal against the tries by Gentner and Traoré. 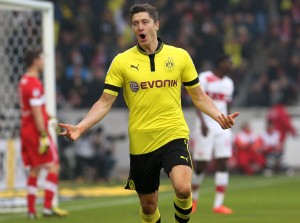 Another three minutes later, Stuttgart equalized (not undeserved) when Maxim made his way through the Dortmund defense from the right side. His final shot was well-placed in the left corner of the goal and left Weidenfeller no chance. Like stated before, it was a fair result at this time. But the VfB paid the price for his rough play when Niedermeier was booked for the second time after two nasty fouls, the last one against Götze on the height of the middle line with both legs hitting our number 10. Niedermeier's sent-off meant twenty minutes of powerplay for Borussia which was finally used in minute 82 when justice was served eventually at the hands or more the feet of Robert Lewandowski. Piszczek made his way on the right side and brought in a nice cross to Robert Lewandwoski who was there to re-take the lead with his ninth consecutive goal in matches for Borussia Dortmund to set a new club record. The substituted Schieber could make it 3-1 a few seconds before the final whistle but justice was served and the lead was not taken away one more time. The BVB got the win and in the end, it was a deserved one against hard-playing Stuttgart.

Of course, Jürgen Klopp and the black and yellow lads complained about the hard way of Stuttgart's play. Sven Ulreich stated that football is a sport for men and that some rigour belongs to a match but the officials of Borussia underlined several times that Stuttgart exaggerated. The good news, however, are that Schmelzer could be able to play on Wednesday in Malaga with a special mask and that nobody of the players who had some minor injuries after the ninety minutes will be definitely out. Therefore, Borussia won the war in Stuttgart and got the three points to keep Leverkusen four points away. Now the focus is of course on the quarter finals of the Champions League up next on Wednesday. Therefore, let's hope that the little nagging injuries will disappear over the coming days to be able to play with the best team possible.