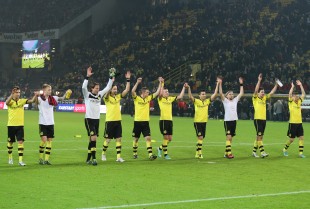 Borussia came back strong after last week's setback against Hamburg. Even though the team was decimated once more after half an hour, the well-deserved 3:0 over fourth-ranked Eintracht Frankfurt was never in danger. The Borussians proved that it does not necessarily need 11 players for a great football team. Star of the evening was Marco "Rolls" Reus with his marvelous hat-trick.

Everybody in black'n'yellow was relieved when it was announced that Neven Subotic returned to the starting eleven. In Donetsk, Jürgen Klopp had relied on Felipe Santana and kept Subotic on the bench, because "he needed more time to regain his rhythm". The Brazilian is still a crowd favourite but he could not prove to be an equal replacement for the reliable Subotic in the last weeks. Even the untouchable Mats Hummels seemed weakened by the fact that his Serbian companion was not on his side. Subotic's return might have been a factor for Borussia's clean sheet of the day but much more important was the collective defensive effort by the team. Against Frankfurt, the strengths that earned us two championships and a cup could be seen once more: A swarm of black'n'yellow bees immediately surrounded the Frankfurter sausage that was unlucky enough to be in possession of the ball. 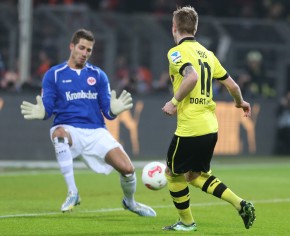 Even more important than the return of our top starting line in defence was the return of Ilkay Gündogan. He is the fixed star in the centre of our midfield. Everything revolves around him. With his technique and agility, he lifts the BVB game to a higher level. Nuri Sahin was not able to play the same role against HSV. And it might be tough for him to realize that with Ilkay Gündogan in his current form it could prove impossible for him to reconquer his old position. With Gündogan on the pitch, all the other midfielders seem to play better as well.

The match had just begun when Reus had his first huge chance. But he did not manage to get the ball past Trapp. This remained his only miss of the day. With his next chance he scored the 1:0. A great combination via Gündogan and Götze lead to the goal. Gündogan played one of his excellent little passes, a Götze one-touch gold nugget and Reus was free in front of Trapp. His great finishing abilities make goals like this look easy. Only a couple of minutes later, it was Reus again. Hummels conquered the ball and immediately ran forward. A nice pass and poor Kevin Trapp was alone with Reus once more. And once more he had no chance to defend the shot. 2:0 after ten Minutes, everything looked hunky-dory for Borussia. 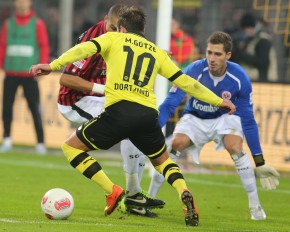 But then Schieber was booked and shortly thereafter went elbow-first into Oczipka. Even though Schieber could not have seen Oczipka approaching from behind, ref Dr. Brych sent him off with a second booking. So Schieber missed his chance to prove that he can be an appropriate replacement for Robert Lewandowski. In his half hour on the pitch, he made no big impact and next week we will have to travel to Gladbach without a real striker.

Eintracht Frankfurt on the other side could never show why they are a serious contender for Champions League qualification. Even with one man more on the pitch they were unable to create any scoring opportunities. So it was on Gündogan, Götze and Reus again to decide this match. After a Gündogan pass, Götze started an unstoppable dribbling into the Frankfurter box where two defenders were unable to take the ball from him. And even under such pressure he was still able to find Reus standing open in his back. The rest has already been told. Reus made scoring look easy once more. It was no wonder that those three players created the decisive moment as they were the best on the field. 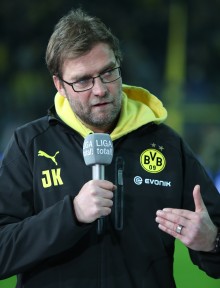 15 Minutes before the end, Takashi Inui joined Schieber for an early shower and so Frankfurt's last hopes to take something home from Beer City faded. Borussia showed that we are standing in the table right were we belong: Behind the paramount Bayern and in front of everybody else. Next week at Gladbach, it will be interesting to see how Klopp copes with the loss of Lewandowski and Schieber. Most likely we will see a 4-3-3 formation and that could mean another chance to start for Nuri Sahin. But maybe coach Klopp will surprise us with a different plan. If the team plays with the same spirit as they did against Frankfurt I will not be worried about starting without a real striker.