Two away goals and a draw in the bubbling cauldron 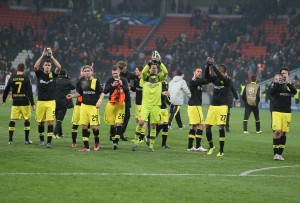 It took Borussia 15 long years to make it to the knockout stage of the Champions League again. After the first leg in the round of the last 16, chances don't look too bad to make it even further. The 2-2 (1-1) away at Shakhtar Donetsk was a hard fought one, but gives Borussia the upper hand and the possibility to make the next step in three weeks in the Westfalenstadion. The young team of Borussia (of which nobody ever played a game in the knockout stage before) showed great efforts and high morale, coming back two times and make it a draw eventually. Furthermore, we all got an impression of how it feels to play against a team which plays a different style of football as we do. Shakhtar was the expected hard opponent with lots of pressing and a quick offense. But we did well in what Germans call a "Hexenkessel" (bubbling cauldron) in Donetsk.

In the mean time of the match against Hamburger SV on Saturday and Donetsk on Wednesday, the topics addressed around Borussia were all similar. Apart from the bugging rumors about Robert Lewandowski leaving in summer, everyone talked about the personal worries BVB had before the match. In the end, it turned out quite okay even though Ilkay Gündogan and Kevin Großkreutz stayed in Dortmund because of injury and illness. However, Marcel Schmelzer was back and left no need to find an alternative left-back so that Sven Bender could form the double-six again, this time in the defensive version besides Sebastian Kehl. This also meant that Nuri Sahin found himself on the bench again after a weak game against HSV. Neven Subotic who was 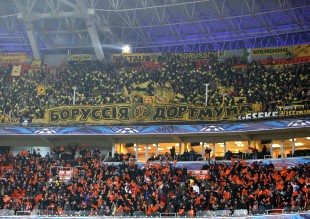 expected back in the starting eleven, took place beside Sahin because Klopp trusted in Felipe Santana once again. The rest of the team remained unchanged in comparison to last Saturday. Donetsk on the other hand only needed to replace defender Kucher because he was banned due to getting yellow cards in the group stage. The home team missed match practice under competition rules because the league in the Ukraine is still in the winter break. However, they recently played 13 friendlies and were expected to be a tough challenge for BVB after overcoming a group with Juventus Turin and Chelsea London. Around 2,000 supporters of Borussia travelled the long way to the Ukraine, being the biggest gathering of fans ever at an away game in Donetsk. It is just impressive how Borussia is always supported all around the globe by the perhaps most loyal fans in the world.

The first big chance of the match saw a header by Hummels after a corner kick taken by Marco Reus from the left side of the pitch. Hummels, however, was unlucky this time as his nearly perfect header only hit the crossbar and therefore missed the lead (17th). Before this big opportunity, Kuba and Lewandowski had minor completions in front of the Donetsk goal. Like stated earlier, it was really interesting to face a team with a similar understanding of football with much pressure and a quick change of gears from defense into offense. 13 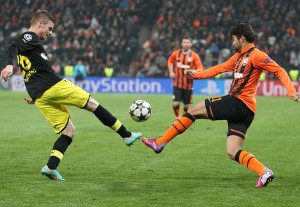 minutes after the Hummels header, Dortmund was not clever enough to calm the match down after a free kick in the midfield. Götze could have blocked the ball for some seconds in order to gain time to find position in the defense, but the free kick was played quickly and Santana was the next one not being too clever in this situation. Central to the goal, he fouled Luiz Adriano (remember him, the fairest player in the world?) without big reason to give Shakthar a big opportunity to score because we knew beforehand that Donetsk was in possession of several players who could hit a good free or corner kick. That's why Jürgen Klopp was not too excited at the sidelines with this situation as if he would know that it would not end well. It didn't, skipper Darijo Srna brought the lead with a direct free kick which not looked as if it would have left Weidenfeller no chance to save. However, he saw the ball late and the free kick was taken very hard so that we may be careful with accusing Weidenfeller. He was not the only one who did not look good in this situation, Borussia was behind for the first time in this year's Champions League competition (31st). Fortunately enough, it did not take Borussia too long to get back into the game. Kuba missed a good shot from the box eight minutes after the 1-0, but two more minutes later, the ball was in the net. Mario Götze got two chances to bring the ball into the box and used the second one of it to find Robert Lewandowski. Now, if you are a big fan of Robert's work, you could argue that he hit an air-hole on purpose so that the two Donetsk defenders would run into each other to make free space in front of the goal. Honestly speaking, it was just luck. However, the way for Lewandowski was free, he showed no nerves at all and scored his fifth goal in the Champions 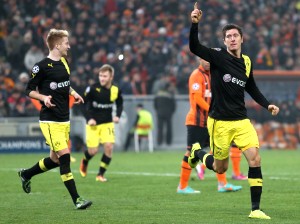 League 2012/2013. 1-1, the equalizer and one important away goal just before the break (41st). However, the good score was nearly thrown away just a few seconds later when a weak shot by Taison (who brought the Dortmund defense into problems several times) was only blocked by an unsure Weidenfeller, another Donetsk player got the opportunity to bring the ball in, but Schmelzer rescued just inches before the goal line. This meant the tie in half time. A deserved result for both sides in an highly attractive, interesting football match with chances on both sides of the pitch.

Even though the second half was not as attractive as the first 45 minutes, the tension was still easy to feel. Opportunities became less and Borussia was more or less in control of the match-up or at least of the ball and showed a good defensive line as well. This defensive line, however, was broken after a long pass from the midfield was miscalculated by Mats Hummels who – to this point – continued his unlucky moments just like against Hamburg and let the ball reach joker Douglas Costa who finished it with a very nice shot to the right side of the goal. This time, Roman Weidenfeller had no chance to save and even Marcel Schmelzer who stood beside Costa could not make up the mistake of Hummels who later stated that Schmelzer was sure that he will get the ball and even he himself was thinking to get it. However, he didn't and Borussia was behind once again (68th). For one more time, Borussia had to learn that 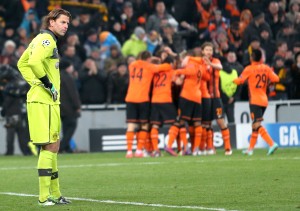 small mistakes like this one by Hummels are directly punished in the Champions League. However, BVB never backed down again and came back with some chances. Another cross from Götze, this time from the right side, found Robert Lewandowski who directly hit the ball directed to the goal but slightly missed the right side of it just five minutes later. In some way, it reminded at the first equalizer to see Götze assisting Lewandowski. However, this time luck was not on the side of our two offensive players. When it looked like Borussia was going to lose this game and you were thinking about how good the result would turn out eventually, another corner kick was awarded to Borussia three minutes before injury time. Schmelzer brought it in from the right side, found Hummels who was totally alone in front of the goal so that he did not even need to jump to head the ball with a really good header into the goal. The late equalizer and like stated before, a great sign of morale, another away goal and the deserved 2-2 (87th). Furthermore, it was also an important goal for Mats Hummels who did not convince in the last two matches. 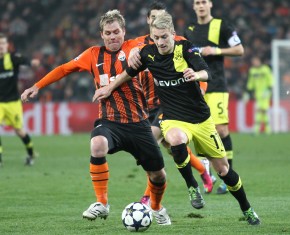 In the end, it definitely is a good result for our Borussia. Scoring two goals away is always a solid starting position for the second leg. Therefore, Borussia is in the advantage and Donetsk does not have the possibility to just defend in the Westfalenstadion even though this would probably be against their idea of football. Donetsk needs to score to advance and this could lead to Borussia getting chances on their own. Of course, nobody is through to the next round yet and the rematch will also be a tough challenge for Borussia but just like skipper Kehl, we should believe in making it to the quarter finals which would really mean a huge accomplishment. Important weeks are yet to come, even the next home match against Frankfurt on Saturday looks to be a difficult one.

You will find our fotos at our Phote-Homepage or here. 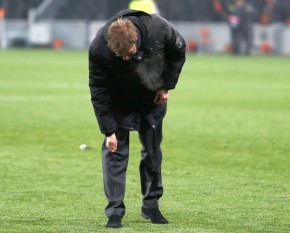