Continue the struggle for the second place 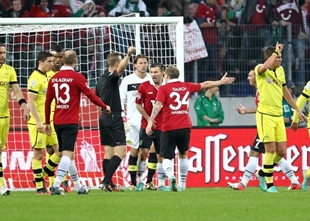 Saturday, at 3.30 pm CET, Borussia welcomes Hannover 96 in the sold-out Westfalenstadion in Dortmund where our team will try to succeed against Slomka's players with the motivation of securing the second place in the League once again. The last match in the first half of the season ended in a well-deserved draw through goals of the teams' strikers Diouf and Lewandowski. This time a victory is needed to guarantee our position in the competition, because Leverkusen, facing Stuttgart on Saturday evening, would be able to pass us in the table in case of a black yellow failure and a triumph of Bayer.

As the last match against Hannover in the Bundesliga showed us that we would have to invest more to defeat them, the BVB tried to do a better job and the encounter in the Cup on the 19th of December 2012 resulted in a way more positive and satisfactory outcome. The fans celebrated a brilliant 5:1 victory in which Mario Götze was an outstanding participant with three goals. The other scorers were Kuba and once again Lewandowski on the one hand, and on the other hand Diouf for his club.

The success in this game is one factor why we can dream of the next triumph in the League which would help us to get back to the continuity that we sometimes missed in the last weeks. But adding to this, the statistics predict a positive outcome too. In all in all 43 matches between the two clubs 19 of these had a satisfying ending for the black yellow Borussia and in home games the fans only saw three defeats. Moreover, the BVB is in a better form than Hannover if you consider the results. On our side there stand 6 wins out of the last 10 matches while our opponent won only 3 of these. 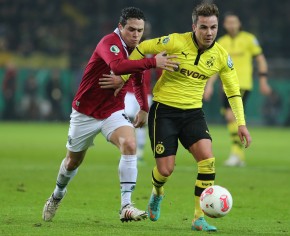 But if you try to forecast the outcome of the match, the upward trend of the team from lower Saxony, that won against Hamburg last week, has to be taken into account, as well as Dortmund’s failure in the cup against the enemy Bayern München on Wednesday which may influence the mood and the confidence of the players although this is not a very likely possibility. They did not disgrace themselves and furthermore they have never had problems with recovering of a defeat before.

Apart of the fact that it was not a bad performance of our team, we have to have a look at the problems we had, namely the missing reliability in the defense and the low effectiveness in the offense. The problematic mistakes in the defense may be caused by the absence of Mats Hummels who we expect back in the line-up on Saturday and the reason for the forwards' slow actions can possibly be explained with Lewandowski’s missing practice after he missed two matches in the League, although this is not a very convincing argument. Actually, it can be said that Borussia showed an average performance and not a brilliant one, which would have been needed to beat the confident Bayern players. So you can see that this failure is no catastrophe and we have all chances to continue our successful way although it is not possible anymore to win the two national titles. For us titles are not as excessively important as for the one or the other club in Germany.

Except for the fact that some players, for example Schmelzer, Reus or Lewandowski, did not perform as well as usually in the Cup, there were also pleasant examples for the black yellow strength on the field. This power was represented by Mario Götze who brought a bit of creativity and motion into the offensive play and especially Roman Weidenfeller who secured us of conceding more goals with his outstanding saves.
Hannover 96 stands on place 7 in the League and can be quite content with its achievements during the season. After their glorious 5:1 victory over the HSV the players are confident and motivated as the want to stay in contact with the places for the qualification for the European competition. As a consequence of that, they will also try everything to succeed in the match.

Regarding the possible line-up all players are hoped to be available for the coach, except for our blocked polish striker and the long-time injured Owomoyela. In addition, it is not to 100% sure if the sick Hummels will be able to join the team again.
On Hannover’s side there are many missing players, like Stindl, Huszti, Chrundolo and Eggiman. Furthermore, it is in question if Diouf, who suffers from problems with his ankle, can be expected in the line-up. His absence could be a advantage for us, because he scored already 10 times for his team during the season.
To sum it up, Borussia Dortmund will face a top 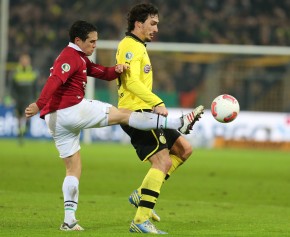 motivated and confident opponent and the fans in the stadium will watch a match full of emotion as both teams see the need to collect more points to secure their participation in a European competition in the following season. But with the help of the great yellow wall in the Westfalenstadion and a bit more concentration on the field a victory would be no huge surprise. As a result, Leverkusen would be set under pressure and forced to win the match against Stuttgart in the evening because otherwise the distance to Dortmund would increase again. At the end it only has to be added : Heja BVB!