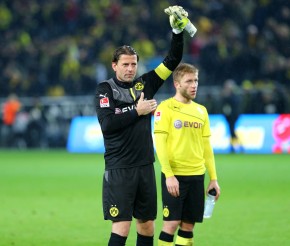 What a night! Borussia Dortmund trashed VfB Stuttgart who were on a little high recently and were undefeated under their new head coach Thomas Schneider. Furthermore, Borussia beat a kind of boogey opponent because Stuttgart managed to gain points in the Westfalenstadion the last four out of five times (with four draws and one victory) and Borussia equalized their club record for the most consecutive home victories which is now at an all-time high of six wins in a row. However, these facts were not the only ones who were kind of astonishing.

One week after the derby victory and all the happenings before the derby it was questionable how the atmosphere in the most beautiful stadium in the world would play out against Stuttgart. The media were high on the use of pyro techniques which were thrown on the pitch and therefore, Borussia's Aki Watzke was under pressure to do something – which he did. A planned choreography was forbidden and there were hardly people who did not understand this rule by Watzke. Additionally, Borussia's biggest ultra group, "The Unity" stated in their letter before the match that lines have been crossed and things went out of control before the derby. However, they asked for time to investigate all the things and we should understand that they need some time just as Borussia does to find a way how to handle this situation. And to put one thing short: the atmosphere did not change at all. No club banners of the ultra groups were presented but the rest of the Südtribüne was willing to do what they are supposed to do – support the team which won the derby. Of course, they were all greeted with "Derbysieger"-chants before the match and at the start of the match. This victory of last week could not be celebrated too much. 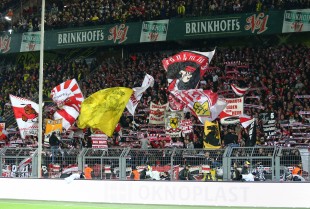 As stated above, Stuttgart came to Borussia with some recommendations and therefore should not be underestimated. Moreover, Stuttgart was the best Bundesliga team to score after set pieces – and all Borussia supporters know that standard situations are not the strength of our team these days. Skipper Sebastian Kehl was not back in the squad (even though he was expected to be beforehand), coach Jürgen Klopp (who extended his contract until 2018 on Wednesday) only missed Piszczek and Gündogan. In comparison to the derby victory, Kloppo replaced Neven Subotic with Greek axe Sokratis and Speedy Aubameyang with pretty speedy Kuba. Stuttgart missed Cacau, Rüdiger, Didavi and Rojas but presented one similar face with young boy Moritz Leitner who currently is on loan to Stuttgart for the running and the next season.

The match started very quickly when Kuba got the ball after a throw-in on the right side of the pitch and his cross/shot hybrid became longer and longer and became a little problem for Stuttgart's keeper Sven Ulreich who saved the ball at the cost of a corner kick (09th). Stuttgart on the other sides used their strength in set pieces and got their first opportunity when a free kick by Maxim resembled the shot line of Kuba's shot seconds ago. Just like Ulreich, Weidenfeller was there to make the save, but the corner kick that followed was better and more dangerous than the one Borussia took (no surprise there!). The corner from the left was taken by Maxim, Hummels had some confusion in the middle of the penalty area so that nobody was there to tackle Karim Haggui who had no problem to score the lead for the guests in minute 12. Nuri Sahin who stood right beside right post had no chance to save the ball. Again, Stuttgart scored after a corner kick and again, Borussia received a goal after a set piece... Same stuff all over again... but wait! More than 200 corner kicks had been taken by Borussia in all competitions, Felipe Santana (who?) was the last Borussian to score after a set piece against Shaktar Donetsk in March. 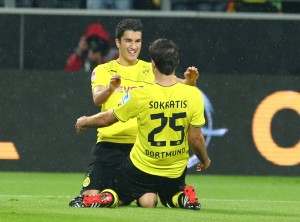 And on Friday, Nuri Sahin assisted Greek axe Sokratis to destroy the curse of the set piece. Corner kick from the right, no chance stopping Sokratis (especially not by small Sakai), and the equalizer (19th). Furthermore, it was great to see that despite the 0-1, no player took his head down. Instead, Borussia just continued to unravel their attacks on the Swabian defense without having doubts that they would turn this match around. And they were right. The will to win was also impersonated by Marco Reus seconds later who stormed through Stuttgart's defense, left three defenders behind him and then scored with a great finish into the right long corner (22nd). Ten minutes after the lead by Stuttgart, Borussia was in front again – and never gave that lead away. However, this was the last highlight for a longer period of time. Lewandowski tried a lob and Stuttgart's Werner created some tension as well in minute 42. An attack over the left side saw Werner storming into the penalty area, only to be stopped by Kevin Großkreutz. The whistle of referee Meyer could be heard in Westfalenstadion and it looked like he was willing to award Stuttgart the referee (and he could have, it was a kind of 50/50 situation). However, Meyer changed his opinion (possibly after a small exchange with his assistents) and the match restarted with a referee ball. Phew. All in all, the 2-1 halftime result was a fair one. Borussia was the better team with more possession and more offensive situations, Stuttgart only had the two described opportunities and made the most out of them. However, it did not look like four more goals could be seen in Westfalenstadion in the second half...

Just like the first half, the second one started with attacking black and yellows. A cross from the right was blocked first and then headed back into the box by Großkreutz who assisted Marco Reus. Our number 11 (who probably is the best German player as of right now) brilliantly extended the ball with his heel and found Robert Lewandowski and the Pole finished artistically with a great chip which left no chance for Ulreich. A brilliant goal, 3-1 and the decider in this match (54th). But just like after the 0-1, Borussia did not stop but continued. 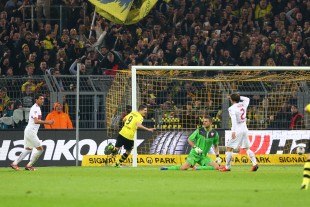 Therefore, seconds later a, long ball from the midfield reached Lewandowski (because two Swabians managed to tackle each other or something) and cold as he is, Lewandowski punished Stuttgart for this mistake by scoring the 4-1 (56th). Stuttgart lost control over the match (even though you could state that they never had any control) and more Borussians attacks followed. Lewandowski and Mkhitaryan missed some nice opportunities but in minute 72, Lewandowski finished his hattrick (in just 18 minutes) after a quick attack over the right side saw Kuba's shot only hitting the crossbar. However, Robert was there to regain the ball and directly score. And because everything seemed to work in Borussia's favor on Friday, Aubameyang finished even though he probably did not know he did it in minute 81, making it a final 6-1. It was a great night and the temple presented a great atmosphere. Derby heroes were celebrated by the whole stadium and even dreams of winning the championship again were expressed. The result was more than deserved since especially in half two, Stuttgart had nothing to put in Dortmund's way and the black and yellows showed that they were happy to play football and to score goals, not being satisfied with just four or five goals.

All in all, it was a great warm-up for the match against Arsenal who today showed that they will be another hard challenge on Wednesday when they defeated Liverpool FC. However, with the stadium behind the team, a returning Sebastian Kehl and a similar performance to Friday, Borussia will get the opportunity to win another night match in the most beautiful stadium in the world. Derbysieger, Derbysieger, hey, hey!