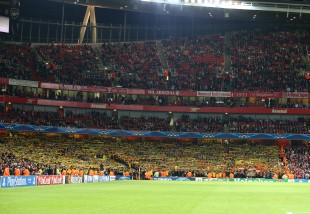 Arsene knows, the fans of London claimed in order to revere their coach who had been with Arsenal for so many years. In return, Evonik gave up an advert in one of England’s biggest newspapers and replied “Klopp knows, too”. And Evonik was right. In the end Jürgen Klopp even had to apologize for knowing so much so well since he and his team spoilt Arsene Wenger’s 64th birthday by taking home three points against a strong but yet not perfect Arsenal London.

While it seemed like two weeks ago we hardly had any healthy players left who would represent our team in London on this Wednesday, it didn’t come too bad after all. Our leftback Schmelzer was back in the starting line-up again after being injured for quite a few weeks. With him Dortmunder Jung Großkreutz as well as Subotic and Hummels, who was allowed to play again after having to sit out one game in the Bundesliga due to a red card, formed the defense. On the double-six Bender and Sahin did a great job whilst up front Kuba, Mkhitaryan, Reus and Lewandowski fought for goals.
On the other side an old friend played a fantastic game for Arsenal. I have to admit I kinda hated him in this game because he gave us a really hard time, but it is good to see after all that Tomas Rosicky is still in the game and knows how to play good football. With him newly media favourite Özil played in Arsenal’s offense and Ramsey joined the team as well. 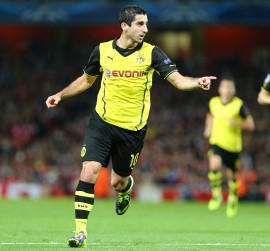 Both coaches predicted an exciting game and they were right as long as only fans of Arsenal and Dortmund were concerned. The game would become quite an exciting one, however, chances on both sides were limited throughout the whole game and it was more of a tactical excitement. Dortmund began aggressively and fast as so often and dominated the game in the first 15 minutes of the game. Arsenal decided to watch and react and let Dortmund play, offensive football, however, wasn’t played by London and so it is no big surprise that the first real shot of the game resulted in the first goal of the game, and since we were the better team to begin with, it was- of course- our goal as well. Ramsey failed to clear the ball clearly from around London’s penalty area, which lead to Reus fighting for the ball in an exemplary manner, regaining it, passing it over to Lewandowski who forwarded it to Mhkitaryan. Mhkitaryan showed no mercy and shot it precisely past Szczesny and into the goal. 1:0 for our Borussia. Perfect!
It is strange how Dortmund very often manages to give away a dominance that they are holding in a game but after our leading goal mistakes suddenly flooded our game and Arsenal grew stronger and stronger. Fourty minutes into the game we could only thank Mats Hummels for having qualities like a handball keeper. Our old acquaintance played a great ball onto our goal, which could only be saved by Hummels legs, who was basically lying on the goalline. There are times when you can actually smell that something is going to happen and so it happened. Dortmund’s lack of concentration resulted in too many bad passes, which helped Arsenal to do the inevitable- they equalized. Weidenfeller seemed to have adapted to the inattentive way the rest of the team had played for a few minutes now and did not really went for the ball when Giroud stormed by. It did not help that Subotic and Weidenfeller irritated each other as well and suddenly the score read 1:1. Time for a break. 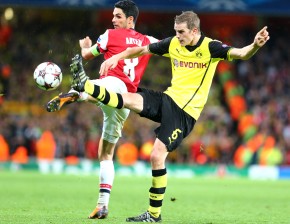 The second half of the game did not begin quite as furiously as the first half had started for us. Both teams seemed to await the other one and did not dare to attack in full force. At some point, though, it seemed as if Arsenal had enough and pulled themselves together. With Özil, who had not really been seen by then, getting stronger, Arsenal’s offense also varied a bit more. In the 69th minute the wake up call followed. After a great cross by earlier mentioned Özil, Cazoria hammered the ball straight onto our crossbar from around 20 meters distance. After having complained about the crossbar for so many time in the past couple of years now, we were actually quite lucky this time. I may be wrong but if this ball had gone in, I doubt we would have gotten back into the game. Arsenal seemed on the edge now. Buvac decided to bring Hofmann and Aubameyang for rather Kuba and Mkhitaryan but our offensive game suffered from confident Arsenal players. Even though the big chances were missing now, Arsenal remained strong and kept the upperhand of the game. It was definitely the predicted difficult game. But when you feel like it can only be seconds until you lose that game, our players do what only a few teams know how to do. They score. Out of nothing. In the 82nd minute of the game Aubameyang forwarded a ball onto the quick by storming Großkreutz, who ran down the line, straight into the penalty area and played an utterly perfect cross onto Lewandowski who came forward from the left into the penalty area and hammered the ball into the upper right corner of the goal. What an attack from our boys! When you feel like a draw is quite alright for playing away, our boys show that they have not given up yet- wanting more. Finding no answer to that, the Gunners had to call it a day and Dortmund was the winner of the day. 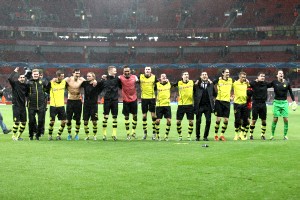 It was a tough game for sure. If you want to be very critical you could actually say that our offense had a rather bad day because chances were rather limited on our side. On the other hand- let’s remember all those chances we had in Manchester last year and didn’t use. In the end we got the equalizer and were rather disappointed after having dominated the game all the way through. This time Arsenal appeared to be a bit stronger, a bit more eager- but Dortmund did, what many of us claim every week they have to learn still: using their chances. Out of two really good ones, they scored two goals. And more than that, they fought, they ran, they were alert and they gave all they had. Maybe that wasn’t necessarily an offensive firework this time, but an extremely important victory.
With Napoli, Arsenal and Dortmund having won two games each, the table of this group looks rather entertaining and things should stay rather exciting. We knew that this wouldn’t be an easy group, but after all we have two away games behind us and are looking forward to welcoming back the Gunners in our beautiful Westfalenstadion in a couple of weeks.
And now it is Derby Time! You know what that means Ballspielverein!