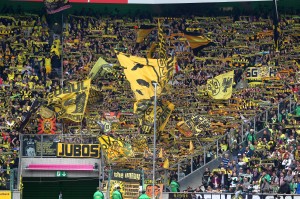 Regarding Borussia Dortmund's performance we saw nearly everything - passion, speed, midfield dominance, chances to score. What we didn't see were any points. Home team Borussia Mönchengladbach were so inferior but still got away with three shocking points as two late goals served them an undeserved 2-0 win at home.

But let's start at the beginning. Borussia Dortmund started their travel to Mönchengladbach coming from two convincing victories. After trashing SC Freiburg 5-0 at home the black-yellows marshed on and over Olympique Marseille, who were easily beaten 3-0 at Westfalenstadion. So all in all BVB had incredible 19 points out of 7 matches in Bundesliga and an ok three points after two matches of the Champions League group stage. But surely the trip to Rhineland wouldn't be that easy. Though keeper Roman Weidenfeller was back in goal compared to last Tuesday, where he was still suspended due to a red card against SSC Napoli, but still the likes of Gündogan, Kehl, Piszczek and Sokratis were missing. So the flat four was made up by Großkreutz on the right side, where he improves from match to match. In central position Subotic and Hummels were defending while young gun Erik Durm startet as left back. In holding midfield Nuri Sahin was accompanied by Sven Bender. Sole striker Robert Lewandowski was backed by Aubameyang, Reus and Mkhitaryan.

Borussia Mönchengladbach on the other side had a mixed start into the season. While they had a perfect record at home with three wins out of three matches, they underperformed on the road, where they got just one point out of 4 matches. Nonetheless manager Max Eberl and coach Lucien Favre built up a nice squad that was strengthen in offence by Raffael and Max Kruse. The team finished 2011/12 on the fourth spot but was a lit bit shaky last season were the finished on 8th place only. Compared to last match Favre opted for fast midfielder Herrmann instead of Hrogta and fielded Granit Xhaka instead of Kramer. 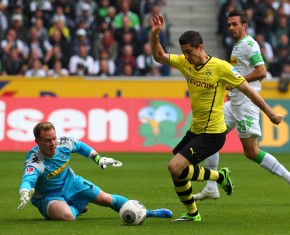 A sold out Borussia-Park in Mönchengladbach packed with 54.010 spectators saw an intense first minutes. In minute 5 Erik Durm was up and away on the right side. The ball found Reus in the box, who missed the upper right corner by one meter only. One minute later top scorer Lewandowski had another approach that was cleared. It soon became clear that Borussia Dortmund was completely dominating midfield. Mönchengladbach was pushed deep to their own half and had only very few attacking moments. Nuri Sahin was the next one coming close to ter Stegen's goal. His free kick from 25 meters was wide. In minute 16 Lewandowski earned a corner kick for BVB. The deflected ball was fired towards ter Stegen from outside the box. The young Mönchengladbach keeper wasn't able to catch the ball and so the ball deflected. Central defender Mats Hummels suddenly got the ball totally unmarked 6 meters in front of the goal. Unfortunately his shot was superbly cleared by ter Stegen. Borussia Dortmund took some minutes until their next chance. In minute 28 Aubameyang paced into Mönchengladbach's box but his shot from narrow angle missed the far right post. Still Dortmund were pressing but there were only 2 minor chances, when Reus and Sahin tried to score. All in all Borussia Dortmund played a fantastic first half with absolute midfield dominance. They create some good chance but missed hitting the net.

Both coaches didn't see any need to make chances and so the same 22 players entered the pitch. And it was again Borussia Dortmund that took control. Though Mönchengladbach tried to push a little bit more, it was still going only one way - direction Mönchengladbach's goal. In minute 54 Mönchengladbach defender Dominguez fouled Lewandowski but got injured himself. He had to leave the pitch with a shoulder injury and so Brouwers entered the pitch. BVB didn't stop attacking and in minute 58 Aubameyang stormed past ter Stegen but again missed the goal from narrow angle. And finally in minute 60 Mönchengladbach had their first real approach. Striker Max Kruse paced past Kevin Großkreutz and played a sharp cut-in from the left side into the box. Left back Wendt was totally unmarked but missed the goal from about 12 meters - that one was really close. Borussia Dortmund weren't impressed and in return had their next big chance. Marco Reus fired a fierce curve ball from the left side. Ter Stegen needed a fine save to prevent BVB's first goal. Jürgen Klopp made his first change. As Sven Bender got a minor injury he was replaced by Jonas Hofmann. Only minutes later in minute 77 also Blaszczykowski was brought in instead of Mkhitaryan. Blaszczykowski had an immediate impact only two minutes later but his shot from the left side was cleared by ter Stegen. 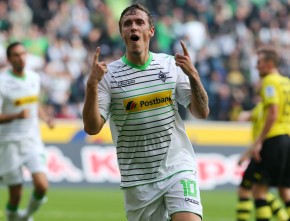 When BVB's supporters were just wondering whether they will get away with one or three points, a single event put everything upside down. An attack by Mönchengladbach in minute 80 brought the ball near BVB's box. A sudden pass was on its way to Nordtveit, who was waiting in the box. The Gladbach holding midfielder was in a good position to score a goal. Central defender Mats Hummels had no chance than trying a last desperate tackle. Unfortunately he first hit Nordtveit's leg and brought him down. Referee Gräfe had no other choice than pointing to the penalty spot. To pile up the mess, Mats Hummels was sent of for denying a clear chance. Both decision were harsh but ok. Max Kruse took the ball and left BVB goalie Roman Weidenfeller no chance - 1-0 Mönchengladbach! With one man down and 1-0 behind Borussia Dortmund still did not give up. Marco Reus hit a nearly perfect free kick that hit the bar! But now Mönchengladbach played in a really clever way. A fast counter attack found Raffael in the box and the Brazilian had no problem to score - 2-0 Mönchengladbach. This made a final end to any BVB dreams of at least one point and so the match ended in a devastating way that saw Mönchengladbach winning 2-0.

This match has two aspects. On the one hand we played fine, fast football and created some chances. On the other hand we lost due to a penalty all three points and we lost some player. Mats Hummels will be missing for at least one match due to his red card. Nuri Sahin got a ligament injury in the dying minutes and will be missing for two or three weeks. Sven Bender got a minor injury and we'll have to see whether he will be available for the next match at home against Hannover 96. A little relief is the fact that we have now two weeks time as there is a national team break. 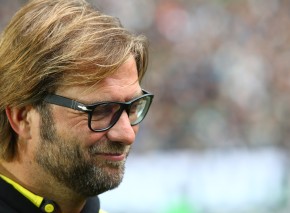 Lucien Favre: „We slept during the first half. It was like a mircale to reach halftime break with a 0-0. We played slow football. In the end these three points weren't deserved."

Jürgen Klopp: „It was an extraordinary match. This dominance was far from belief. We pushed Mönchengladbach deep into their half. But we also did our part as we missed out on several chances."