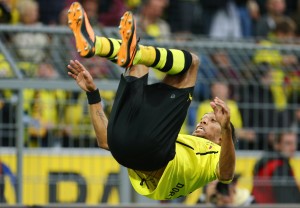 The statistics of this encounter did not promise too much: Dortmund against Hamburg is the game with the most goals in Bundesliga history. In 92 clashes a total of 329 goals were scored. No wonder that the 93rd edition totally kept what the statistics indicated.

A superior playing black and yellow squad (32:4 shots on goal) beat Hamburg 6-2 with in an offensive spectacle and a strong finish. And although it did not look so bad for Hamburg after the surprising equalizer, Aubameyangs go-ahead goal in minute 65. signified the beginning of the end for the northern Germans – with goalie Rene Adler being the most pitiful guy on the pitch. 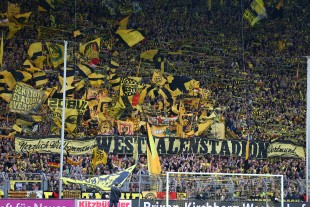 Responsible for the destruction of the Hamburg defense was basically the same squad that brought the three points from Frankfurt back home. Only Kuba had to pass due to an injury and was replaced by new signing Aubameyang on the right wing. And right after kick-off, our guys made clear that it will be a hard working day for the squad of head coach Torsten Fink: Aubameyangs first attempt could yet be blocked (4.) and a shot from Mkhitaryan served by Lewa could be parried by Adler. The rebound from Sahin was then too harmless (5.).

Again it was Adler with a brilliant move after Lewandowski could finish off a ball from central position. The goalie wisely led the flat shot around the right post, avoiding that Reus would receive the bouncer to score (10.). In the next situation, the Hamburg goalie was without any chance to save, but it seemed that he made a pact with the aluminum. Hummels had his try by heading the ball to the bar after a free-kick by Marco (13.). Dortmund managed to maintain continuous offensive pressure that now paid off blow on blow. First, it was Aubameyang who scored the overdue lead: Schmelzer with a brilliant idea and a fast free-kick to our quick French striker. Auba received the ball, passed defender Westermann and scored out of a sharp angle (19.). Three minutes later, Mkhitaryan increased the score with a shot from 16 meter distance (22.). Dortmund was now on course and Hamburg so far without any sign of life. Totally surprising then the goal for Hamburg: Lam on the left wing passed Subotic and approached the center, without any open man available, he desperately took his chance and shot. The – admittedly – beautiful scoop around Weidenfeller perfectly fit into the right corner, leaving our captain no chance to save (26.). 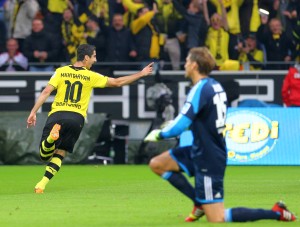 A solo run and shot indeed, because apart from that, it was only our Borussia playing. Hamburg did not show up in front of Weidenfeller again. Until halftime, Klopps guys made it up to 13-1 on goal attempts. Adler did save another shot by Reus and could thank the crossbar once more that his team went with “only” a 2-1 deficit into the halftime break (39.).

Right after the break, Hamburg equalised with their second on goal attempt: Westerman headed a free-kick by Van der Vaart into the net (49.). Subotic did not look that good in this situation and got substituted ten minutes later by Sokratis. Sometimes I hate the word effectiveness, especially when it’s up to our opponents to demonstrate how to make the most out of nothing. A dominant first half in which the match could already have been decided could not be used and now, it was again up to the yellow jerseys to find a way through the deep standing Hamburg defense.

Luckily, nothing’s changed. With both feet on the accelerator, our team made chances after chances: Reus (55., 63.), Aubameyang (59.) and Mkhitaryan (63.) - without success. The problem: the ball simply did not want to go into the goal, especially because Hamburg keeper Adler kept his squad with brilliant saves in the game. It was again up to Aubameyang to relieve us: Mkhitaryan with a pass to Auba, who had space between Lam and Jiracek and finished off from sharp angle (65.). 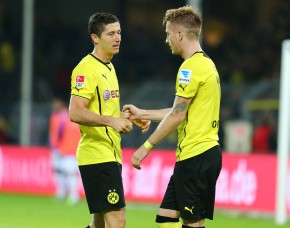 With the confidence of the advantage in mind and an opponent without any chance on the pitch, Aubas goal was the start for the Hamburger deformation. An overwhelming attack led to the next highlight: Aubameyang on the right wing with a flat cross to Reus. To the surprise of all, Marco did not finish off with an attempt, but brilliantly let the ball pass to the better positioned Lewandowski, who just had to hold his foot in the right direction in order to extend the lead to a comfortable 4-2 (73.). Just 100 seconds later, Reus collected his reward and made the game safe. Marco received the ball in the left side of the box after Hamburg could not clear the situation properly, and with all the time of the world, our blonde forward duped Diekmeier and shot through his braces into the bottom right corner (74.).

Klopp then substituted Schmelzer for the young Durm, Hofmann – who just extended his contract until 2018 – replaced Mkhitaryan in the midfield (79.). But thats not everything yet: A nice cross by Sahin could easily headed in by Lewa who jumped higher than two Hamburg defenders (81.). The second goal from Robert and simultaneously the final mentionable situation of this match. 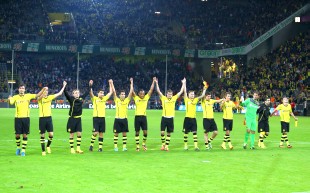 Due to the best season start of the clubs history (five games, five victories), Dortmund remains on top of the Bundesliga table. Against a weak but temporarily terrifying efficient team from Hamburg, our black and yellow boys left out too many promising chances, especially in the first half. A fact, that should be taken care of and considered wisely before the adventure Champions League 2013/2014 starts for our team in Neapel this Wednesday, 8.45 p.m.

However, in the last couple of matches something that slowly started to grow together more and more becomes a strong alliance. The new signings Mkhitaryan and Aubameyang seem to fit perfectly into the system of Klopp and both found their place in the squad and on the pitch. Sokratis further proves to be a more than adequate substitute for Felipe. The youngsters Hofmann, Durm and Duksch have slowly be integrated into the squad and will now form an important and reliable backup. Borussia Dortmund in 2013/2014 surely has a new face, but the mind behind it remained the same: An offensive, fast forwarding team with continuous pressure against the ball carrier and pure offensive power. We will have a lot of fun with this new face and no matter what will be waiting at the end of the road, as the phrase goes, the journey is the reward. Heja BVB!