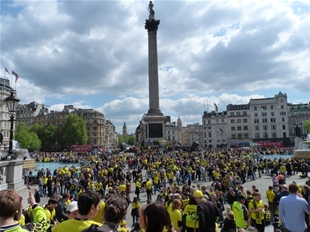 Tomorrow we will play in London. London, do you remember? It shouldn’t be too difficult as this will be the third visit in a row to the British capital. London is always worth the journey, so we will not complain, but it is quite unusual for sure. We are going to visit the well-known places, see the well-known people, enjoy the well-known London-feeling. There will also be some sad memories, of course, but even more good ones. Who doesn’t automatically begin to smile whenever there’s a picture of the Trafalgar Square or the Picadilly Circus coming up, slightly wondering if it’s already back to normal or still a little black and yellow after last May? Who wouldn’t get goose bumps when thinking of the thousands and thousands of fans that coloured the metropolis in black and yellow only? Or the atmosphere in Wembley on this memorable day? We will not go to Wembley this time, where most of the sad and bittersweet memories lie, but to the Emirates Stadium again. The memories we have left there are less emotional. It was a very strange game two years ago with two important players going out very early, Borussia struggling to overcome that for the rest of the game, never really managing.
There was the one and only Robin Van Persie and Song that were far too much for us to handle. We lost the game quite simply because we were not good enough on that day and because there were two individuals who decided the game on their own, none of them being in our team. There are also some memories about how the English press went nuts about our fans, 9000 probably, that celebrated the whole game long, singing, dancing, clapping. And there were the Borussia fans deeply moved by how the Arsenal fans rewarded Sven Bender with standing ovations when he had to leave the pitch. Good memories for sure, despite the 2:1 defeat. 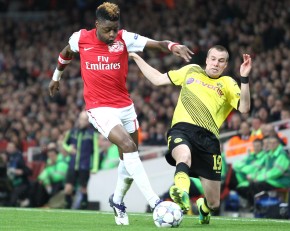 Two years and a Championsleague final later, the circumstances have changed completely. We are still going to London as the underdog, I guess, but it’s not as clear anymore. We have won a lot of respect in last year`s Championsleague run and there will be enough people calling us the favourite in the upcoming game. Considering our bad away balance sheet in the Championsleage with only one victory since 2003 (against Ajax last season), looking at the way Arsenal is dominating in the Premier League, leading the table, being stronger than ever and the last two Bundesliga games of us, I would most certainly call us the underdog. This, however, doesn’t mean we don’t stand a chance in the Emirates Stadium tomorrow! We all know how or beloved Borussia has a habit to grow with the task and we have shown quite some impressing Championsleague games, also away. Especially in England on the day when Joe Hart saved Manchester City from a disaster.

Despite two less impressing games in the Bundesliga lately, we have enough reason to believe in our strength. The impressing home game against Marseille is still in the back of our heads and the team is complete again. Except for Kehl, Gündogan (who are both back with the team and probably ready to play again soon) and Piszczek, all players are fit and eager. They will have back the rhythm after the hard fight against Hannover and could train together several times. We had two days to recharge the batteries and I have no doubt that there will be a very strong and capable team entering the Emirates tomorrow, encouraged by the Championsleague anthem, being pushed by a big and highly motivated away support to go one step further than one thought possible. And maybe they are also willing to fight for their coach again who will have to sit one more time with the green keeper in the VIP seats due to the events in Naples. 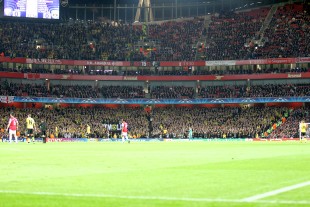 The extraordinary Championsleague feeling is back and will be multiplied by the fact that we are playing in London where so many memories were made lately. Let’s enjoy it with the whole of our heart, supporting the team with all we have and I’m sure it will be another unforgettable evening. Come on black and yellow boys!