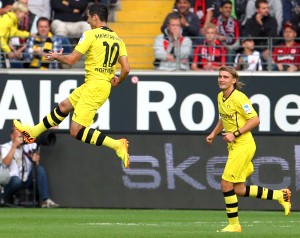 4 wins out of 4 matches - what else do you need? But there is a little bit more to this story. Borussia Dortmund earned 3 points in Hesse after not so beautiful 90 minutes with shaky defences on both sides. In the end Henrikh Mkhitaryan made the difference with securing Borussia's 2-1 win with his 2 goals.

Contrary to BVB Eintracht Frankfurt was on European duty during the week. The black and red boys from the banking city secured their place in this season's Euro league's group stage with winning the return leg against Qarabag Agdam 2-1. That catapulted them into a group with Girondins Bordeaux, APOEL Nikosia and Maccabi Tel Aviv. For the fanatic Frankfurt supporters surely 3 very interesting journeys through Europe and the Near East. Nonetheless Eintracht Frankfurt have good chances to survive and proceed to the knock-out level. 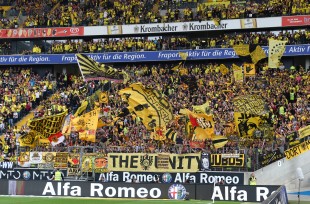 This European bonanza somehow covers Frankfurt's bad start into the Bundesliga season. Being destroyed 1-6 in Berlin on the first match day they lost 0-1 at home against Bayern Munich - though this one was unlucky. Their first three-pointer was in Braunschweig last week. So coach Armin Veh was somehow already in need of results.

Eintracht Frankfurt had to cope with the injury of Alexander Meier, who had problems with his hamstring muscle. Adding to that Veh left Celozzi, Oczipka, Schwegler and Rode out. Djakpa, Schröck, Russ, Rosenthal and new Czech striker Kadlec started instead. In front of goalie Kevin Trapp Schröck, skipper Zambrano, Anderson and Djakpa made up the flat four. Flum and Russ played in Frankfurt's holding midfield. Aigner, Rosenthal and Inui played behind sole striker Kadlec. 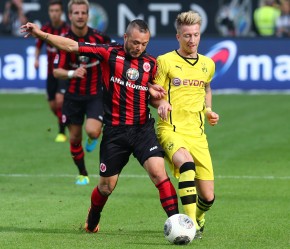 During the week Borussia Dortmund had their only exciting moment on Thursday when the Champions League group stage was drawn. BVB got into a group with Arsenal FC, Olympique Marseille and SSC Napoli. Really 3 nice away matches. Ok, London and Marseille are teams Borussia Dortmund already played 2 years ago. Back then BVB finished on a lousy fourth place and exited the European stage before winter already. This time there is a different situation. Borussia have the experience of 2 Champions League seasons and the final in Wembley last May. Still it is a tough group as all 4 teams are able to proceed to the knock-out stage. There is really no big favourite and no underdog. And BVB's supporters will as well have 3 nice away trips.

Borussia Dortmund's coach Jürgen Klopp needed only one change. Sven Bender replaced Sebastian Kehl in holding midfield. Ilkay Gündogan was still missing due to back problems. He will be out for another 2 weeks. And of course right-back Piszczek will still be missing until the end of the year. So in front of goalie Roman Weidenfeller Großkreutz, Subotic, Hummels and Schmelzer started as our flat four. Bender played next to Nuri Sahin in defensive midfield. Blaszczykowski, Mkhitaryan and Reus played behind striker Robert Lewandowski. 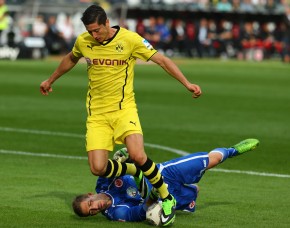 In front of a capacity crowd of 51.500 spectators both teams started aggressively. Borussia Dortmund had a more technical style of gameplay, while Frankfurt took on the duels in midfield. Though the black-yellows started their first approaches, it was Frankfurt who had the first chance. In minute 4 Aigner played a high pass into BVB'a box. There Japanese forward Inui was waiting, but his drop-kick shot was saved by Weidenfeller. On the other side Blaszczykowski tried to convert a pass by Reus. But like Weidenfeller Kevin Trapp was there and made an easy save. In minute 10 Blaszczykowski stole the ball from Flum in midfield. His fast counter-attack was finished by a fine pass that found Henrikh Mkhitaryan in the box. The Armenian national made just one touch and easily played past Trapp and hit the net - 1-0 BVB!

Only 4 minutes later Lewandowski was up and away. He tried to surpass Kevin Trapp but the tall Frankfurt goalie got his hands on the ball and so the chance was wasted. In minute 21 Eintracht Frankfurt tried to strike back. Rosenthal's pass found Kadlec offside. But as the linesman didn't reacted the Czech striker got the chance to score. But again Weidenfeller cleared. Borussia Dortmund now somehow lost touch. As half an hour was played, Reus and Schmelzer had two approaches, that were also wasted. And while Eintracht Frankfurt was at this moment no danger for BVB's goal, they had another approach in minute 36. Inui got the ball in left midfield. His long diagonal pass found Aigner unmarked on the right side of BVB's box. Aigner's header hit the near post and left Weidenfeller stunning. Unfortunately the deflected ball found Kadlec unmarked 7 meters in front of the goal. He easily scored and it was 1-1! Borussia Dortmund was shocked and there weren't any more chances until halftime break. The last arouser of the first 45 minutes was seconds before the whistle. Central defender Mats Hummels brought down Kadlec and got booked. 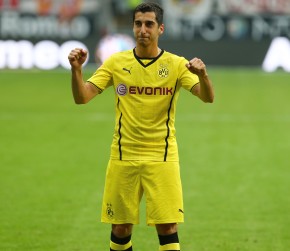 Jürgen Klopp made one change. Surprisingly Mats Hummels was left in the cabin and Greek defender Sokratis entered the pitch. Later in the press conference Jürgen Klopp stated that Mats Hummels was near a sent off. It is more likely that Hummels was left out, because he had a lousy first half. Frankfurt started aggressively and left Borussia no space. BVB's first approach in the second half needed until minute 56. Mkhitaryan got the ball at the right corner of the box. He paced parallel to Frankfurt's box and finished his move with a powerful shot that foud the lower left corner of Trapp's goal - 2-1 BVB!

But also this second lead didn't resulted in a more powerful BVB gameplay. It was still a mediocre game and Eintracht Frankfurt had more approaches. In minute 62 a corner kick found Anderson's head. The Frankfurt defender hit the post only! On the other side Robert Lewandowski's shot was blocked by Trapp. Jürgen Klopp now brought Aubameyang instead of Blaszczykowski. Aubameyang's pace should be a weapon in counter-attack. But still Borussia didn't get back into the match. Instead Frankfurt had some minor approaches. Inui's shot in minute 82 was blocked by Großkreutz. Eintracht had then their last chance in the last seconds when striker Joselu's shot was saved by Weidenfeller. And so finally Borussia Dortmund got away with a 2-1 away win.

Really a tough fight that saw Borussia Dortmund getting away with 3 points. Surely, even a draw for Frankfurt would have been ok as Eintracht invested more in the second half. Nonetheless Borussia Dortmund have now 12 points out of 4 matches - a perfect record. Now there is a 2 week break because of national team duty. Borussia Dortmund will then host Hamburger SV, who trashed Eintracht Braunschweig 4-0 this weekend.

Jürgen Klopp: „We started very well and had good chances. The equaliser was deserved, we made some mistakes in that situation. The second half was wild. But we gave it all and in the end ,Mick' made a beuatiful goal."
Armin Veh: „We allowed too many chances. In the second half we played very well. We should have defended better before Borussia's second half. In the end we stabilized our performance in the league, still we have only 3 points."