London is great but Football can be cruel 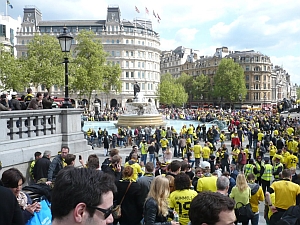 "Where's the match report?" you probably will ask several days after the CL Cup Final in London. Yes indeed, a legitimate question! But to be honest for most of us, watching the match live at Wembley, in a London pub or at home it's very difficult to write down all our thoughts, emotions and experiences of Saturday, 25th of May, 2013.

So, this is not a match report. It's a report how my friends and me experienced a day in London. And let's start from the beginning: The mostly asked question during the last weeks was: "Did you get a ticket for Wembley?" And the answer of my friends and me was sadly always the same: "No!" We tried everything for purchasing a ticket like Borussia's lottery drawing or several competitions, but without any success. In spite of getting no tickets three friends and I decided to book a bus trip to London. Our opinion was: Due to the fact that we all will get no tickets we would probably watch the match in a Dortmund pub. So why not watching the match in a London pub and enjoy the local atmosphere in one of Europe's most exciting cities? And the tour operator's price of only 79 € for the bus trip incl. ferry Calais-Dover and return was an additional incentive for us. 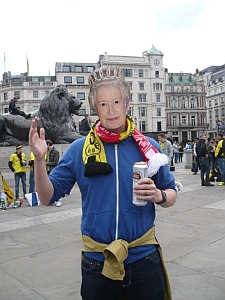 Our trip started at 2 a.m. from Dortmund. It was a little bit shocking for us when 8 Bayern Munich fans entered the bus at the next stop in Herne, a town not far away from Dortmund. But all our concerns were destroyed when it turned out that they were really funny guys with a good sense of humour and their preferred drink wasn't mineral water. After the ferry ride in Calais our bus arrived in London around 1:30 p.m.. From the internet we knew that Trafalgar Square with the big Nelson statue will be a meeting point for many Borussia fans.

During a short break in a pub near Big Ben I asked two guys with BVB caps about the quickest way to Trafalgar Square. Both stood in front of the bar and explained it to me. I thanked them for their good description and asked them: "You are Londoners?" "No, we are from Montreal, Canada" they replied. Funny, a German guy from Dortmund is talking to two Guys from Canada in London and all three are Borussia Dortmund supporters. Yes, the world is getting smaller and it seems that black and yellow are also much favoured colours in the world. The confirmation for this thesis followed immediately when we arrived at Trafalgar Square. Thousands of Dortmund fans (where were all the Bayern fans?) celebrated our team and prepared themselves for the final. Very impressive from which countries all over the world they travelled to London. I just mentioned the two Canadian guys, and now we met and talked to fans from Scotland, Sweden, Netherlands, Switzerland, Poland, Russia and even Mexico! No continents, no countries, no borders! Welcome to Borussialand! Not to forget, that a lot of Londoners mentioned to cross their fingers for Borussia and not for Munich.

Fortunately we met Bernadine and Trish and a lot of other Irish people at Trafalgar Square. All belong to the Dublin Borussen and all are passionate Borussia fans. We told about Bernadine's and Trish's love for Borussia Dortmund some months ago at schwatzgelb.com. So, if you are interested you will find the black and yellow story of the two Irish ladies here. 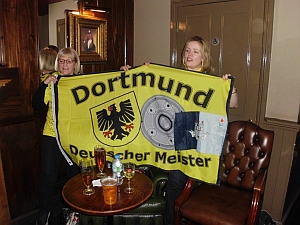 A lot of the Dublin Borussen also had no tickets and so Bernadine offered us to watch the match in the pub "The George" not far away from Covent Garden. We all were lucky about her offer because in many pubs it would be difficult to find free seats or a place at the bar to watch the match. It was a great atmosphere at "The George" and to complete Europe's black and yellow map, my two Italian neighbours fell like us into deep depression after the 1:0 for Bayern in the second half of the match. Our jubilation after Gündogan's 1:1 was close to an earthquake but depression followed again when Robben scored for Bayern and the final whistle destroyed all our dreams and visions. Sad and cruel – but that's football! One remark about the few Bayern fans at "The George". They acted absolute fair and often we heard them say "today the luck was on our side". Yes, absolutely true, when we think especially about Borussia's perfect start in the first 20 minutes. So we said goodbye to all our friends from Ireland, Scotland and Italy and walked to Charing Cross to drive home from sunny London to rainy Dortmund.

And now our London trip is nearly one week ago and we all returned to reality. The rumours about Robert Lewandowski's future will continue, Felipe Santana signed a contract for a suburban club in Gelsenkirchen and Greek international Papastathopoulos Sokratis is Borussia Dortmund's new defender.

What will remain from our one day London trip? Yes, we lost the final and our black and yellow team will change for the next season. But one thing will be for sure: The Borussia Dortmund European tour will continue in the next Champions League season and our love for black and yellow will go on. It doesn't matter if there will be matches in the Bundesliga or in the Champions League. This match at Wembley made all Borussians getting closer!

And a big "Thank You" to Bernadine, Trish and all the other Borussia Dortmund supporters from Ireland! The next match we will watch together will be a win for black and yellow, the most perfect colours in the world!