The last away-game of the Bundesliga competition 2012/13 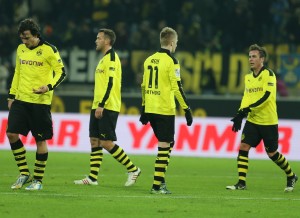 This Saturday, at 3.30 pm Borussia’s last away-game of the current Bundesliga season will take place in Wolfsburg. Although our 2nd place (and consequently also the qualification for the Champions League 2013/14) is achieved, this match is not necessarily unimportant. On the one hand we still have a score to settle with the Vfl after they unfortunately defeated us last year, and on the other hand this can be seen as the first test for the final against our dear rival Bayern in the Wembley Stadium.

The situation before and the chance of winning seem to announce a victory for our BVB having scored almost twice as many goals as the team of coach Hecking. Furthermore, the Vfl was only able to win 3 of its last 10 matches while we succeeded in 7 of them. It can be added that the overall statistic is also supporting the schwatzgelb dominance over the green-white club. It shows 17 victories for us in all in all 33 games in which the teams faced each other. For fans of statistics this information might be enough to be convinced of a win for Borussia, but especially the very last encounter with Wolfsburg shows something different: the end result in the Westfalenstadion was BVB 2 – 3 Wolfsburg! It has to be said that it wasn’t our best match but nevertheless the outcome was not really well-deserved. Marco Reus had achieved the lead in minute 10 but later it turned into a 2:1 for Wolfsburg, then there was the 2:2 by Kuba but not very long before the final whistle by the referee Dost scored the 3:2 granting our opponent 3 points. Apart from the strange course of the game, there was also an unjustified red card for Marcel Schmelzer that contributed to our defeat. 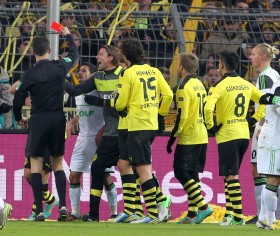 Interestingly enough, this was only one of several warnings that were spoken by the referees in games of the two clubs. In the last 3 matches when Dortmund faced Wolfsburg , 17 yellow and red cards were given. This gives us the impression that the relation between the two clubs is not really friendly. Something contributing to this critical atmosphere is also the fact that there is a high contrast in the philosophy of the club management and also of the supporter’s attitudes. While the Vfl Wolfsburg always invests lots of money in famous expensive and numerous players, Borussia Dortmund mainly looks for talented young footballers whose costs are feasible for the club. In addition, the BVB is one of the clubs with the most distinctive fan culture. Wolfsburg cannot compete with the emotional relationship of Borussia’s supporters towards the club at all as only 3 of its home-matches were sold out.

As described before, the game will be full of contrasts but nevertheless it is also a reunion of former colleagues. Ivan Perisic, who is not expected to play from the beginning on, will be able to meet his old friends from Dortmund and moreover Ilkay Gündogan will see his former coach in Nürnberg, Dieter Hecking, who is now employed in Wolfsburg , again.

Of course, everybody is already excited about the final of the Championsleague but it is quite sure that the players 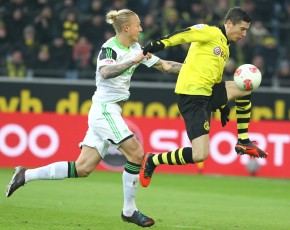 will go into the match with enough seriousness, because they have to practice for Wembley. They have to collect confidence for the hard game against München and therefore they cannot risk to underestimate their last away-game in the League as this could be connected to a defeat by Wolfsburg and the resulting panic. This panic could already influence the preparation for the final negatively.

I already explained the importance of the game which also causes the fact that the line-up will not be the same as the one of the last match. Most of our regular players will come back onto the field from the beginning on, except of Götze of course who still isn’t back in training yet.