One of our favorite opponents 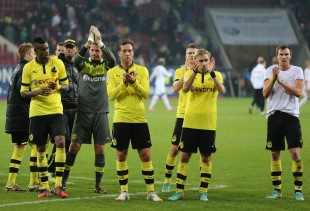 The next station in these furious weeks is our Westfalenstadion. After away matches in Stuttgart and Malaga the BVB welcomes the FCA from Augsburg, still fighting to stay in the League, in Dortmund. It is just the second time ever that the team in white and red has the honor to have a look at the overwhelming atmosphere on the yellow wall. A nice fact: Borussia never lost against Augsburg!

This Saturday at 3.30pm it’s time for the League again! Although the Championsleague is maybe more spectacular, the League is what we should concentrate on, because it is of course our goal to participate in the highest European competition next season again. Securing place 2 is what we are aiming to achieve, nothing more. We are all aware of the situation in the table and so it is clear to everybody that the title is unreachable. Bayern will win the League this year and we don’t care if they make it official this weekend or in some weeks. We concentrate on us and our aims.

The situation before the match against the FC Augsburg seems clear. The FCA on place 16 with 24 point is in the struggle against releg 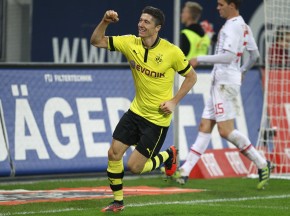 ation and Borussia Dortmund with 52 points on the 2nd position has a comfortable perspective to stay there till the end of the season. But if you have a closer look everything does not appear that easy-going for us anymore. Augsburg is a quite strong away team which is proved by the fact that they are on place 13 if you take only away games into consideration. In addition, our team did not always convince in home matches, this is proved by the home-match-table, where they stand on the 5th place. Moreover Augsburg succeeded in the second half of the campaign. If the season had started on the 18th day, the team would now be on place 6 with high ambitions to qualify for the European League! This gives us the hint that we cannot compare the former encounters with Augsburg to the next one, as the players around the coach Weinzierl improved their performances a lot. Furthermore, the coach proclaimed that they would try everything to take some points with them from Dortmund. He even foretold a very brave attitude of his team. 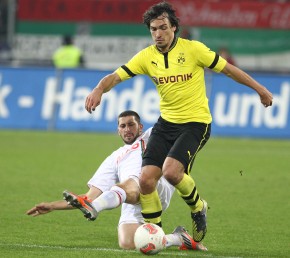 s, it should not be forgotten how the matches before ended. The one in the first half of this season was won with 3:1, and the last home match even with 4:0. All in all, there is a statistic of 2 victories for Dortmund and one draw. More over there stand 7:1 goals, 5 of them scored by our top-forward Robert Lewandowski. Taking all this into consideration it can be concluded that the FCA is really one of our favorite opponents, especially of Lewandowski. Nevertheless we never underestimate an opponent and we know that we have to invest lots of energy and will to succeed.

In the last weeks we always had some problems with the personal situation but this time it seems to be different. Mats Hummels, who had to make a break because of an injury in the match against Sch**** and even the long-term injured Patrick Owomoyela were back in training on Thursday where they were tested, so that it becomes more and more possible that they will be able to stand on the field. In addition there is also hope for Jakub Blaszczykowsky who missed the game in Malaga.
On the other side, coach Weinzierl cannot rely on Ja-Cheol Koo, Michael Parkhurst and Ronny Philip. It comes even worse fot him regarding the questionable players, namely Bance, Ostrzolek and Sascha Mölders. The possible loss of the striker Mölders is especially annoying for Augsburg, as he is the most dangerous forward in the team and furthermore the only one who ever scored a goal against us.

Although the FCA does not appear to be a difficult task as they have not been very successful against the BVB in the past and they are also weakened because of injuries it won’t be a sure-fire success for us and the players have to keep on concentrating on their game although the last weeks have been exhausting. They should try to show the same motivation which they showed against Malaga because otherwise they will disappoint their supporters as they somehow already did in the dull Derby after the brilliant match against Donetsk some weeks ago.
We can be sure that Jürgen Klopp will prepare the team well and hopefully the players will only focus on Augsburg and not on all the things around, like the probable championship win of the FC Bayern and the following deciding match in the Championsleague.