The hottest game of Borussia's 2012-2013 campaign is about to be played on Saturday. The Bundesliga evergreen between, well, Greuther Fürth (one could at least refer to the team's nickname "shamrock" to explain the term "evergreen"!) and Borussia Dortmund is exciting spectators among the whole of Europe. About 5,000 supporters are about to make their ways to Franconia to watch the suprise package Greuther Fürth taking on ... Well, none of this is true. Let's admit, it is pretty tough to write a pre-match report for this weekend's game in Fürth, but something needs to be put on paper.

Tuesday's game was a blast, in fact it still is, given the apathic smiles on the faces of the people of Dortmund. And it's not only about the way we made it to the semi finals, it is unreal in many other respects to see Borussia taking part in the Champions League at such a late stage of the season, even though most of us know about 1997 and 1998. But, literally, that was a different century then. Today's team is special in so many ways, and we are all looking forward to getting revealed later on today against which opponent the young guns are about to write history next. And, yes, there is this Bundesliga game in Fürth coming up.

Even if it weren't for the Málaga game and the semi finals, this match probably was the least interesting of the entire Bundesliga season. Let's recall for a moment that there is more than just Champions League, and have a look at the standings: With six games to go, Borussia is ten points clear of the blue scum in fourth place, plus about a couple of dozen goals in the tie-breaking goal difference. In other words, to qualify for next year's Champions League shouldn't be a big deal, even if Dortmund does not win the competition in 2013. On the other hand, Greuther Fürth has collected a total of 15 points with nine points behind Augsburg on the play-off spot, and their new head coach Frank Kramer admitted during the week that his team is about to prepare for second division from now on. Given that most of our players are still recovering from 94 minutes on Tuesday and definitely look like as if a break was not the worst idea ever, we can expect some personal and tactical formations on the pitch never to be seen again. With temperatures approaching roughly 20 degrees, the entire game looks like an exhibition game during the summer break. 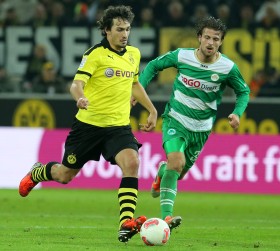 The same is true for the fans, actually: Jens Volke, fans' representative at Borussia, called it the Fürth flu on Facebook yesterday: A mixture of grandmother's birthday, cars broken down and indispensableness at work which prevents supporters to set out for Fürth. But to be honest, it is probably more like a long hangover after one of the biggest parties of our lifetimes. And we all know the best medicine against a hangover: Grab a beer and enjoy some football.

Borussia Dortmund: Yet another eleven players

Referee: Probably on the pitch as well