Wasted two points on the buzzer 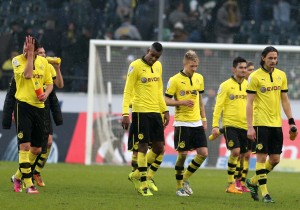 Borussia Dortmund got back from Mönchengladbach with a 1-1 draw. What looked like a solid first 45 minutes ended with a dissapointing second half. Nonetheless the black-yellows had a last chance in the dying seconds of the match, but Sebastian Kehl missed this sitter.

Our boys went to Mönchengladbach with mixed feelings. As Lewandowski was still missing due to his red card at home against Hamburger SV and Julian Schieber due to his yellow-red card against Eintracht Frankfurt at home, Jürgen Klopp had to change team tactics. Mario Götze played our sole striker, somehow like the national team of Spain sometimes acts. As Kuba was injured Kevin Großkreutz started on the right wing and Marco Reus took the left side. Youngster Moritz Leitner played on Götze's position in central attacking midfield. Ilkay Gündogan and Sebastian Kehl played in holding midfield, backed up by our usual flat four, Schmelzer, Hummels, Subotic and Piszczek.

VfL Borussia Mönchengladbach had some problems on their own. Herrmann was booked for the fifth time last week and Juan Arango got injured during the week, when Gladbach played at Lazio Roma. So adding to the fact, that Mönchengladbach got thrown out of the Euro League, they also had to cope with the injury of maybe their best player. All in all the „foals" haven't won for five consecutive matches in a row. Coach Lucien Favre made four changes in total. Daems, Rupp, Younes and Hanke replaced Cigerci, Arango, Herrmann and de Jong. Luuk de Jong, the tall Dutch striker, had a lousy start in Mönchengladbach. Bought for more than 10 million Euro, he is nowhere near his goal scoring record from the Dutch league. 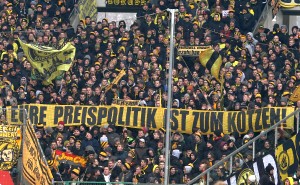 The match started in front of a capacity crowd of 54.010 spectators. Both teams need some minutes to get into the match. Daems set a first arouser when he tackled Neven Subotic in minute 3. The first approach was initiated by Götze some minutes later. He dribbled past two Mönchengladbach players and passed to the right side, where Piszczek was waiting. His high cut-in found goalie ter Stegen catching the ball. Only seconds later Piszczek got a pass by Mats Hummels and headed it directly in front of the goal. Kevin Großkreutz was waiting to convert but Dominguez was able to clear. Step by step Borussia Dortmund took over the midfield and had way more ball possesion. A curious play happened in minute 15. A long ball by Neven Subotic, that really wasn't a threat for Mönchengladbach, was deflected by Jantschke. Mario Götze was nearly able to get the ball unmarked in the box but goalie ter Stegen jumped out of his goal and saved. 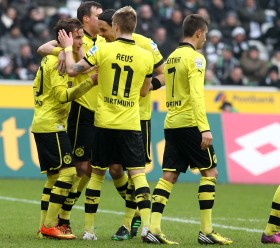 All in all, despite a dominance by Borussia Dortmund, the match was nowhere beautiful or technically high standing. Both teams struggled to penetrate the box. While Borussia Dortmund had at least some approaches, Mönchengladbach had next to no idea to be any threat for Dortmund. In minute 19 Mario Götze failed to convert a low corner kick as he was unmarked in the box. About 10 minutes later he was more precise. When Marco Reus played a fine pass to Mario Götze, goalie ter Stegen had no chance but to bring down Dortmund young national player. Referee Perl had no chance but point to the penalty spot. Mario Götze himself took the ball and let ter Stegen no chance as he hit the left upper corner of the goal - 1-0 Borussia Dortmund! In the following minutes Leitner and Gündogan took long distance shots but both missed the goal and so both teams went into the halftime break.

Jürgen Klopp had to make one substitution. As Mats Hummels wasn't able to get back on the pitch due to a minor injury, Felipe Santana was thrown in. And the tall Brazilian had to clear an attack by Mönchengladbach only 4 minutes into the second half. Younes, who had dribbled passed Subotic, was finally stopped by Santana. And indeed, it was now somehow a different match. It was still not high class football but Mönchengladbach now really started to participate. Especially Rupp had some nice actions in the first minutes of the second half. In minute 56 Younes played a pass to the left side to Wendt, who paced down the left side. His try to serve Hanke in the box was blocked, but the ball was picked up by Younes again. His shot from about 20 meters was saved by goalie Roman Weidenfeller. And it was again Weidenfeller, who was tested some minutes later. A high cut-in from the left side somehow turned direction goal and was on its way into the upper left corner of Weidenfeller's goal. Our goalkeeper needed to clear this one over the goalline. The following corner kick got to central defender Stranzl, but as his header wasn't powerful enough, Weidenfeller could clear easily. 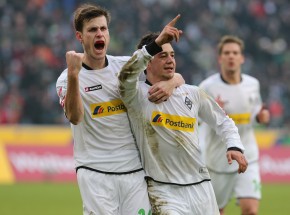 Somehow you now got the feeling, that things were going wrong. Mönchengladbach was on the button. Though far from being dominant, they at least started several attacks. One of those attacks in minute 67 found Wendt up and away on the left side. His cut-in was deflected by Subotic. Younes took a shot from 15 meters, that was deflected by Felipe Santana. Unfortunately the ball dropped into the left upper corner - 1-1! Gladbach was now pressing and Dortmund's defence was really shaken. Luuk de Jong missed a header from 6 meters after a corner kick. Jürgen Klopp tried to strengthen the offence. He brought Bajner for Leitner. Balint Bajner is a tall striker from our reserve team. An indeed Borussia Dortmund now raised the pressure again. Großkreutz and Götze tooks shots in minute 74 and 77, but both missed the goal. And now it was time for Piszczek to leave the pitch. Holding midfielder Nuri Sahin took place in midfield, while Großkreutz took Piszczek's right back position. The dying minutes were running as referee Perl showed an extra time of two minutes. And those two minutes really kicked. In minute 91 Mönchengladbach substitute Mlapa was send up and away and going one on one with Weidenfeller. BVB's goal made a clever move pushing Mlapa to the right side. The striker indeed saw the empty goal in front of him but wasn't able to hit from narrow angle. And while most of the spectators didn't expect anything more the guest team got one last approach. A deflected ball in Mönchengladbach's box took a high curve and was directing to the goalline. Mario Götze made it look like he was waiting for the ball to cross the goalline and taking the corner kick. In the last moment he stopped the ball and played a fast pass in front of the goal. There was Sebastian Kehl waiting, totally unmarked in front of an empty goal....and he managed to miss it! This last arouser was followed by referee Perl's final whistle. 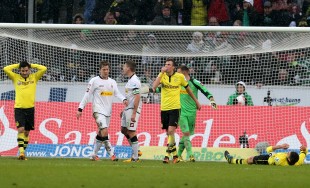 Borussia Dortmund showed two different halfs. In the first 45 minutes the dominated the match and took the lead. Nonetheless it was far away from being brilliant. After the halftime break, the black-yellows really lost it and Mönchengladbach somehow earned one point. Dortmund has now to face FC Bayern away in the quarter final of the DFB cup. Next weekend Hannover 96 is coming to Westfalenstadion.

Jürgen Klopp: „For 60 minutes we played a really good away match. But then we stopped playing football, that gave Mönchengladbach the chance to get back into the match. At all there are much more fatal things than drawing in Mönchengladbach. Still we are not happy."

Lucien Favre: „We were to passive in the first half. We defended deep in our own half. In the second half we were much more agressive. At the end both teams could have scored the winner. But we can live with a draw." 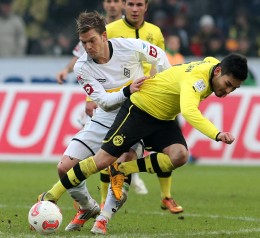