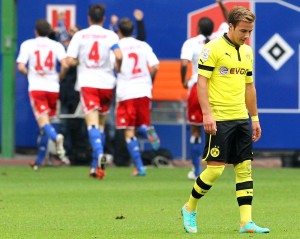 Borussia Dortmund is on the hunt, on the hunt for revenge. The first match in Hamburg was lost due to silly mistakes in defence, giving Hamburger SV the chance to get away with 3 points. But this weekend our boys aren't there to play games. A win is necessary to keep third-placed Leverkusen on distance.

Let's have a short look back. Borussia Dortmund arrived in Hamburg being German champions and unbeaten for incredible 31 matches. The Northern Germany side used an mistake by BVB's defence and took an early lead. Borussia came back after halftime break and Perisic scored the equalizer. While everyone was now waiting for Borussia's finishing punch, Hamburg came back in style and scored twice. Perisic's second goal was not enough to prevent Dortmund's fantastic winning streak coming to an end. It was even more disappointing, that Borussia Dortmund was the better side over the whole 90 minutes. Our boys didn't really recover from that defeat and struggled in the upcoming matches, giving Bayern Munich the chance to create a comfortable lead at the top of the table. It took Dortmund until October to get back in gear.

This time the black-yellows want to secure the right result. The are again on a winning streak having won their last 5 matches in a row. But coach Jürgen Klopp has some major problems. Kevin Großkreutz and Marcel Schmelzer are missing due to infections. Roman Weidenfeller and Mario Götze are doubtful due to infections. Piszczek has some groin problems while Neven Subotic has still not fully recovered from injury. Especially Marcel Schmelzer's missing would open up a big hole in Borussia's defence. A creative solution could be, that Blaszczykowski replaces Schmelzer as left-back. Santana will again take Subotic's place in central defence. If Weidenfeller won't make the Hamburg match, Langerak could again start. Sahin might played next to Sven Bender in holding midfield, while Gündogan will probably play in attacking midfield. Götze might move to the right wing with Marco Reus on the left side. As usual Robert Lewandowski will start as our sole striker. 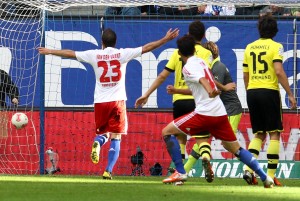 HSV coach has to cope with some missing players. Midfielder Badelj was booked for the fifth time last weekend. Ilicevic, Mancienne and Lam are missing due to injury. The oldest member of Bundesliga will field up their top star Raphael van der Vaart in attacking midfield. Son, Beister and Rudnevs will add to Hamburg's firepower. Rene Adler, who also played for Germany during the week, will be HSV's solid rock in goal.