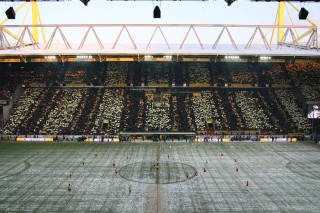 One week after the brilliant performance in Bremen our Borussia will face 1. FC Nuremberg in its first official league match in the frosty Westfalenstadium in 2013. With the 5 - 0 victory against Werder, Borussia put down a marker and demonstrated its good shape after returning from the winter break. Drawing conclusions in comparison to last season, an important question that does now remain is, if Dortmund can preserve the performance against the fish club from Bremen in order to add three more points to the championship account after the match against Nuremberg. If so, where will the journey of our boys in such a condition end in roughly five month from now on?

If we remember back to last year, Dortmund returned from the winter break in a comparable good shape. With a quite similar impressive 5 - 1 victory against the other team from the north Hamburger SV, Dortmund could continue a still unbelievable series of over one year undefeated in a row. As a result, we could in total catch up an 8 point deficit to table leader Bayern Munich and overtake them 14 match days before the end of the season. Indeed, we all know where the journey did end last year: with one championship and one national cup trophy in our hands. 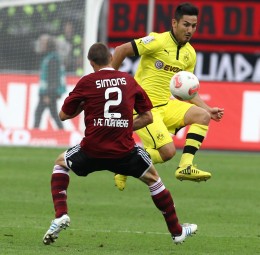 The present situation however looks quite different. After the match against Bremen, our captain Sebastian Kehl stated clearly which ambitions the squad has for the second half of the season: The first place is clearly out of range and nearly impossible to regain with such a strong team from Munich at the top of the table. The aim for the national competition would therefore be place two or three to secure a guaranteed place in next years’ champions league competition. How far the journey will take in the other two competitions is hard to say; all he knew is that everything is still possible.

And in fact it is. The national cup game in Munich will truly be a quite difficult one, however, in the past years Dortmund did demonstrate in an impressive way how Munich could be defeated with a passionate fighting performance. The champions league matches against Donezk though will be tough ones to forecast. On the one side you can say that a club, which is able to defeat Real Madrid and Manchester City, is also able to defeat each of the other remaining teams in the competition. On the other side, well... whatever happens, happens and matches against putative underdogs are always difficult to play.

Jürgen Klopp meanwhile called everyone up to show more modesty. The match in Bremen was a good one, no question, but Nuremberg will be a more different, harder and even more challenging opponent. Speaking of Nuremberg, they currently play an up-and-down season with more downs than ups. Ranked on place 15, the threat of relegation may be still far away with an 8 point distance to place 16, but it is definitely a present topic in the clubs’ environment. Therefore, Nuremberg can’t really afford to leave Dortmund with 0 points. On top of this situation, head coach Hecking transferred to VW Wolfsburg during the winter break, leaving behind a squad that seems to be in an - positively said - improvable shape both tactically and individually. It will be interesting how new head coach Wiesinger will adjust his players to capture at least a draw from our temple. A weak and in the end lucky 1-1 draw against Hamburg last week clearly showed the necessity for changes. On the personnel sidec his centre defender Nilsson will return in the defence after recovering from influenza. Also Feulner and the fast Japanese Kiyotake wil return in the offence for Mak and Esswein. 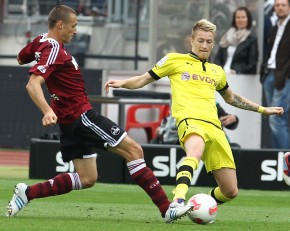 On our side, Neven Subotic will still remain on the stand although his regeneration process was quite promising during the week. We will definitely see him in the yellow jersey very soon. For him, Santana will remain in the central defence beside Mats Hummels. Felipe showed a solid performance in Bremen and scored a nice header - adding for consideration that the defence was not challenged at all last week. Another personnel matter will be, if Kevin will remain on the left side. If Kuba would substitute him, Marco Reus will change to the left wing in order to give Kuba the possibility to unlock his full potential on his strong right side. One thing that is for sure is that our lost son "Nuri" will return to his 82.000 friends this friday evening. After the emotional reception in Bremen that caused goosebumps on his skin, he will be welcomed even warmer in Dortmund. If he will join the squad on the pitch remains questionable. However, his presence already feels good and the time of his absence seems to become smaller and smaller.

Going back to topic, as I already said, it is quite difficult to say where the journey of our black and yellow boys will end. After coming back from the winter break last year, Dortmund continued the series of undefeated games, caught up and ending up as national champion. In these days, things are not like last year. The old home strength could not be maintained, with only 4 victories, 2 draws and 2 defeats Borussia definitely has to improve its home balance in order to remain where they would like to; at the top of the table and in both the national and the champions league cup tournament. We don’t know where the journey will end but a victory against Nuremberg would certainly be a good one to start with.