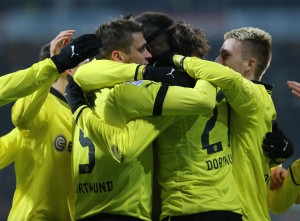 Some weeks of winter break are behind us. Borussia Dortmund came back in style by beating Werder Bremen on the road. And it was not some narrow result or luck thing. The Northern Germany side was trashed 5-0!

BVB had some changes in their squad. Left forward Ivan Perisic was sold to VfL Wolfsburg. On the other side Watzke, Zorc and Klopp managed to finalize a spectacular deal in signing Nuri Sahin. The heart of the championchip winning BVB team in 2010/11, who chose back then to leave Borussia Dortmund and join Real Madrid CF, has finally found his way back to Westphalia. After a desatrous first season with the Spanish giants he was loaned to Liverpool FC. But there it was the same all over. He was most of the time on the bench instead of showing on the pitch, what he can do. Nonetheless he is still the same powerful player he was two years ago. Jürgen Klopp has now the task to find a place for Sahin in his team. Some tactical changes are possible. Maybe Sahin will play together with Kehl or Bender in holding midfield and Gündogan may move to central offensive midfield. But that would on the other hand mean, that Kuba might drop out of the starting eleven. 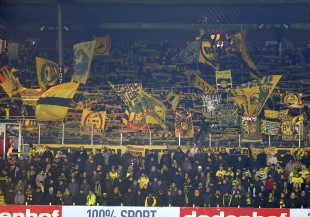 Werder Bremen is going through difficult times. Missing the Champions League for a couple of seasons means that the financial possibilities are really small. Last summer some top earners like Pizarro and goalkeeper Wiese left Bremen. Coach Thomas Schaaf has now the difficult task of forming a promising team, that might someday make its way to Europe again.

Borussia Dortmund had to cope with the injury of Neven Subotic, who will be out for some weeks. Santana replaced him in central defence. Along with Santana Hummels, Schmelzer and Piszczek made up our defence. Kehl and Gündogan played in holding midfield, leaving Sahin on the bench. Reus, Götze and Großkreutz played behind sole striker Lewandowski.

Thomas Schaaf had to replace striker Arnautovic due to a 5th yellow card. He opted for a Spanish style line-up with no real striker. De Bruyne played as a central attacking midfielder and Petersen and Elia as wingers.

In front of a sold out stadium Werder Bremen started eagerly without creating any dangerous moments. Ilkay Gündogan initiated a first highlight when his pass found Schmelzer on the right side. The left back was blocked by Petersen. In minute 9 Lewandowski was fouled by Bremen defender Sokratis 19 meters in front of Mielitz' goal. Reus and Götze took position and Marco Reus finally placed a superb freekick into the lower left corner - 1-0 BVB! Bremen reacted in style when Hunt sent Petersen up and away. Instead of passing to de Bruyne he tried to convert but didn't score. 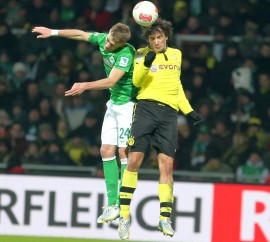 All in all both teams weren't able to dominate the match. Only BVB had some nice moments when they raised the pressure. In minute 19 a super fast counter-attack found Großkreutz on the left wing. He passed to Götze waiting in central position. Mario Götze fired a shot from about 22 meters, that was deflected by a Werder defender. The ball made a crazy curve and hit Mielitz' goal - 2-0 BVB! What an unbelievable conversion rate! Elia tried to shorten the lead only 2 minutes later but was denied by Piszczek. Central defender Mats Hummels had a nice approach in minute 27 when nearly converted after a corner kick. Though BVB was now in control it was still no easy match. In minute 38 Santana stopped Hunt with a foul and was booked. Minutes later Mario Götze also saw a yellow card as he played the ball Maradona-style with his right hand. And as the referee was already looking at his watch Götze, Reus and Lewandowski had a last approach but waisted the chance.

There were no changes in halftime. Borussia Dortmund received a first corner kick in minute 48. Santana sneaked into the box and placed a nice header into the net - 3-0 BVB! While Werder Bremen was giving their best in the first half, they now collapsed totally. 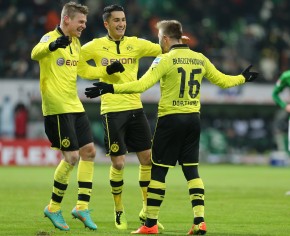 Roman Weidenfeller made a nice save in minute 59 when he dived for a header by Petersen. In minute 71 it was time for showering for Reus. Kuba took his spot. Five minutes later Bender replaced Götze. And while some spectators thought there wouldn't be anymore highlights, Borussia Dortmund started to raise the pressure again. A fast attack found Piszczek on the right side. His low cut-in found Lewandowski unmarked directly in front of the goal. The Polish national player had no problem to convert - 4-0 BVB! And now it was really time for the comeback of the season. With heavy standing ovations Nuri Sahin entered the pitch. He took his place in holding midfield. Then it was again Piszczek who paced down the right wing. The Polish full back found his national team mate Kuba on the left side of the pitch. Kuba hit the goal easily - 5-0 BVB.

All in all it was a deserved win. Though the result was very clear, Werder Bremen was giving it all at least in the first half. In the last 45 minutes Bremen collapsed and from there on it was like a training match. Thomas Schaaf might not really be amused. Borussia Dortmund has to play Nuremberg at home on Friday evening. Werder Bremen is travelling to Hamburg.

Thomas Schaaf: „From the third goal on we lost everything. BVB knows how to play, you could clearly see that. In the first half we played not too bad but didn't score. When Reus scored from the freekick, we weren't able to come back."

Jürgen Klopp: „That was a fantastic start into the return leg. Crucial was the fast switching from defence to offence. We solved many situation very well and were superior in the second half."