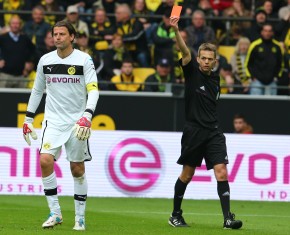 What looked like an easy cruise to a sure three-pointer and kicking TSG Hoffenheim direction 2. Bundesliga, ended in horrible last 15 minutes. Borussia Dortmund wasn't able to hold on to an early lead and so two late penalties by Salihovic gave Hoffenheim a vital win.

Feelings were mixed in front of the last Bundesliga match of the season. On the one Borussia Dortmund already secured the second spot of this season's Bundesliga and everyone was preparing for the Champions League final next week. On the other hand we had still some duty ahead. TSG Hoffenheim were visiting Westfalenstadion and the club from Southern Germany was still in the middle of relegation battle. The private toy of SAP co-founder and billionaire Dietmar Hopp had a horrible season. Added with some big money transfers like Werder Bremen goalie Tim Wiese the Hopp boys were torn apart during the season. The return leg was even worse than the first leg of this season. And so Hoffenheim was on spot 17, what would mean direct relegation, in front of this match day. Two points were missing to reach Fortuna Düsseldorf and Augsburg, who both had 30 points. 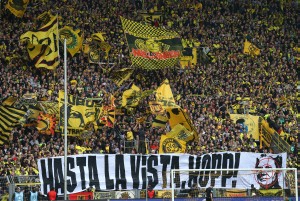 And then there was Borussia Dortmund's story. The club that emerged from ashes like phoenix and went on to storm the Bundesliga with back to back titles in 2011 and 2012. And as a next step Jürgen Klopp and his boys took this story to Europe. Being drawn to the toughest Champions League group with Real Madrid, Manchester City and Ajax Amsterdam, many predicted an early exit. But the following months were a fantastic ride through Europe. Topping the group easily (!), taking Shaktar Donetzk, Malaga and Real Madrid out of the tournament.....unbelievable! On the other hand there is Bayern Munich, surely at the moment the most dominant and therefore best team in the world. Their in total 7-0 destroying of FC Barcelona was so extraordinary, that the are surely favourites to win next Saturday. But as a final is always something special....you never know.

Jürgen Klopp fielded his best formation apart from offensive midfielder Mario Götze who is still missing due to a torn muscle. But the young German national will be ready for next Saturday. Roman Weidenfeller started in goal, shielded by flat-four Piszczek, Subotic, Hummels and Schmelzer. Gündogan and Bender played in holding midfield, while Großkreutz, Reus and Blaszczykowski played behind sole striker Lewandowski. Hoffenheim coach Gisdol opted for Vestergaard, Johnson, Polanski and Ochs in favour of Süle, Thesker, Weis and Schipplock. 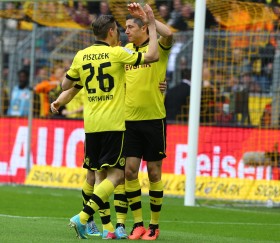 In front of a capacity crowd of more than 80.000 spectators Hoffenheim started with a defensive tactic, staying deep in their half. But it took only 6 mintues to break up their defence. A high cut-in form the left side by Marcel Schmelzer found Blaszczykowski's head. His attempt was cleared by Hoffenheim goalie Casteels but Robert Lewandowski was waiting to convert the deflected ball. It now had something of a friendly match. The narrow lead seemed enough for Borussia Dortmund, while TSG Hoffenheim wasn't able to react. In minute 18 Blaszczykowski had another approach but his shot was saved by Casteels. Hoffenheim midfielder Rudy at least tried to set a mark by axing Gündogan in midfield. In consequence he was bookd by referee Drees. Only four minutes later Hoffenheim player Vestergaard was booked. In minute 37 Hoffenheim had a first chance out of the blue. Firmino played a superb pass that found Salihovic up and away in the box. BVB goalie Weidenfeller made a fine save. In return Lewandowski had two wasted chances on the other side. And so both teams went into halftime break with a narrow but deserved 1-0 lead for Borussia Dortmund.

Gisdol made one chance. Rudy, who was in danger to be sent off, was replaced by Szarka. Kevin Großkreutz took a shot in minute 53, which was wide. Only 60 seconds later Gündogan tried a fantastic curve ball that was heading for the upper right corner of Casteels' goal. The young goalie needed everything he got to save this one. Jürgen Klopp now replaced Bender by Sebsatian Kehl. And in minute 67 Kehl had a big chance to double the lead. Blaszczykowski was up and away down the right side. His low cut-in found Kehl waiting in the box.The unmarked midfielder took a shot but wasn't able to find the goal. Some minutes later striker Schieber entered the pitch while Piszczek left. And now the craziness started. 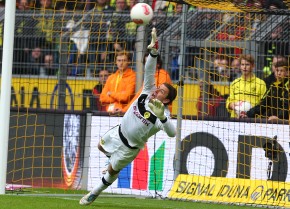 In minute 77 BVB central defender Mats Hummels made a stupid foul within BVB's box. Sead Salihovic converted easily and so it was 1-1. To pile up the mess Hummels got injured during this foul and had to leave the pitch. Felipe Santana, in his last match for BVB as he moves to Gelsenkirchen, took his place. And only three minutes later a vertical pass into BVB's box found Hoffenheim striker Schipplock. Roman Weidenfeller jumped out of his goal and brought down Schipplock. The consequence was another penalty and a red card for Weidenfeller. As Borussia Dortmund had already made three substitutions Kevin Großkreutz took Weidenfeller's jersey. But again Salihovic converted easily and so TSG Hoffenheim was suddenly in the lead. As Augsburg was on their way to win their match and Fortuna Düsseldorf behind in Hanover, that would have meant that Hoffenheim would move to spot 16, which would mean two decisive relegations matches against 1. FC: Kaiserslautern of 2. Bundesliga. BVB had only one last chance. A deflected ball found Marcel Schmelzer about 20 metres in front of the goal. He fired a powerful shot direction Casteels. Lewandowski, who was standing offside in the box, tried to deflect the ball but missed it. Nonetheless the ball hit the lower right corner. As referee Drees didn't show an offside position the whole stadium was celebrating the 2-2, which would have meant that Hoffenheim would be relegated directly. But after a short talk with his linesman Drees cancelled his decision and the goal was denied! Seconds later the match was over and Hoffenheim have still a chance to stay in Bundesliga. 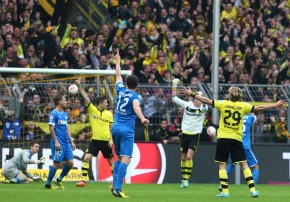 All in all it was a bad Saturday afternoon. We lost, Hoffenheim have still a chance to stay in league, Lewandowski lost the race for the season's top scorer title against Leverkusen's Kießling, Weidenfeller was sent off and Mats Hummels got injured. As Hummels' injury later turned out to be only a minor one he will be available next Saturday. At least a lime light after this horrible match.

Jürgen Klopp: "We played fantastic football for about one hour but lacked efficiancy. We wasted too many chances. Both penalties were justified. I don't know about the canncelled 2-2. Our focus is now on the final next Saturday."

Markus Gisdol: "After 60 minutes we were happy to be trailing by one goal only. Dortmund had plenty of chances. But we knew our chances would become better with each minute. The dying minutes were very emotional. We are now happy to get this last chance."