With drive and efficiency back in the league 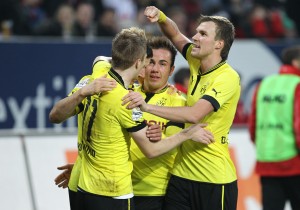 Four days after the passionate play against one of the best teams in the world from Madrid, Borussia travelled to Augsburg in the south of Germany. After an hard and intense game with one goal from Reus and two from our Polish striker Robert Lewandowski, Dortmund could compensate the performance against Real and add three more points to their account by winning 3:1 against Augsburg in their second first division season. However, this victory cannot completely be rewarded to the goal strikers. In the end, a brilliant Roman Weidenfeller and Augsburgs inability to turn their chances into goals were the main reasons for this result. 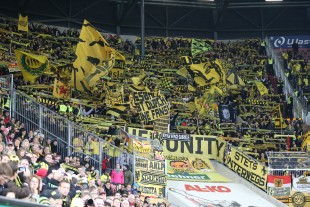 In advance, Dortmunds coach Juergen Klopp had to replace our captain Sebastian Kehl, who received a knee injury under the week against Madrid, by Sven Bender. Also centre defender Neven Subotic was given a break, he remained on the bench. For him, elite-substitute Santana joined the squad. After the third game without scoring, Augsburg coach Markus Weinzierl made three changes in his starting formation by sending Koo, Ostrzolek and Callsen-Bracker on the pitch for more offensive power. 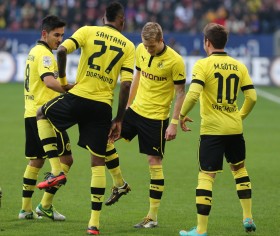 Both teams did not need much time to get used to each other and started their offensive play right away after the starting whistle. Grosskreutz (5.) and on the other side Werner (6.) had their shots at target and warmed up the goalkeepers Weidenfeller and Jentzsch. Right after that, one of them already had to get the ball out of the net. Marco Reus had his try with a free kick on the left side outside the box. Where everyone expected a cross into the box where our tall boys Santana and Hummels were already waiting, Marco decided to challenge the football god. After a perfect flying curve, the ball hit the right post right under the crossbar into the goal. With absolutely no chance to defend for Jentzsch this was definitely a goal from the category "goal of the month" (8.). Augsburg however did not seem to be impressed by this early deficit and continued their offensive play. Where our Borussia slowed down and changed from acting to reacting, Augsburg bravely strived for the equaliser. First, it was again Werner who challenged Weidenfeller with a dangerous bouncing ball (11.). Then it was Baier who tried to get into the game report with a distance shot (14.). Oehrl however had the biggest chance for Augsburg, fortunately his powerful volley from the penalty spot missed closely over the crossbar (18.). 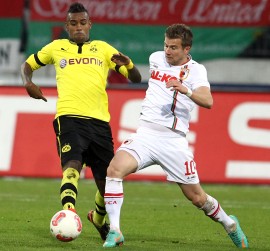 From now on, both defensive lines could improve their organisation and adjust to their opponents play. Together with an increased quote of missed passes in front of the box on both sides, the amount of chances decreased notably. The game flow suffered with a lot of tough play in the midfield. The only mentionable chance then was again form Oehrl (37.) with a 17-meter distance shot that went again closely over the crossbar.

Approaching the end of the first half, both teams again increased their offensive efforts against. Augsburg could build up some pressure with nice combinations in front of the Dortmunder box. Via Werner and Oehrl, Baier received the ball and found his shot from 13 meters saved brilliantly by Roman (44.). Closely before the halftime whistle, also the club which is currently table leader in their champions league group, could contribute notable action. After a cross from Reus, Goetze received the ball and made a nice turn. Taking advantage of a clear “field of fire” he smashed the ball against the left post (45.+1). With a close and meanwhile lucky 1-0 lead for Dortmund, both teams went of the pitch. 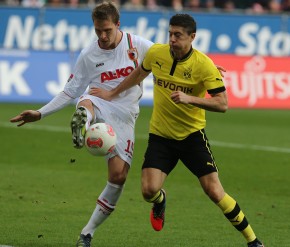 After the halftime, Augsburg started the second half like they stopped the first: with encouraged offensive play. From the Augsburg point of view however, the goal was scored on the wrong side. Weidenfellers punt landed in front of Goetze who directly forwarded the ball to Lewandowski into the box. Robert did not seem to be much impressed by the slide tackles from Ostrzolek and Klavan and finished his attack with a nutmeg against goaly Jentzsch to the 2-0 lead (51.).

Augsburgs reaction? Attacking! Coach Weinzierl substituted Musona for Werner (60.). A measure that directly seemed to work: Only a minute later, Weidenfeller saved a flat shot from Ottl, Musona received the second ball and hit it hard against the post from a three meter distance (61.). Right after that, the had again the chance to score but fortunately his shot from a central position landed directly in Romans arms (62.). 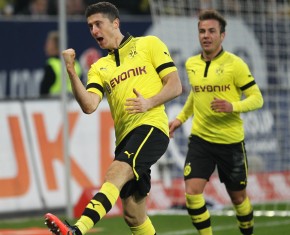 In order to stick to this pattern, it was now again Dortmund who could score after Augsburg missed to. Ottl lost the ball against Bender in the midfield, who made it fast: Reus did nutmeg Langkamp and after his cross pass that passed Jentzsch, Lewandowski could easily score for the second time into the empty goal (70.).

Augsburg however did not show any sign of resignation and continued to be offensive after 370 minutes without a goal. Ostrzolek made a beautiful cross from the left wing and found the free Moelders in the box who could easily head the ball in for the 3-1. Augsburg coach Weinzierl then thought “All or nothing” and sent with Bancé a third striker on the pitch (84.). As a result, Augsburg could create additional chances in the final phase of the match. Moelders headed the ball after a corner kick from Musona against the outside net (87.) and the overwhelming Weidenfeller closely saved a distance shot from Ostrzolek (90.+3). Therewith, the 3-1 remained in the end. 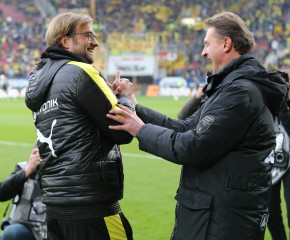 After the hard and exciting match in Madrid under the week, Dortmund could take three important points back home from the south of Germany thanks to Roman Weidenfeller, Dortmunds effectiveness and Augsburg inability. From a national point of view, Borussia may “be behind expectations” at the moment however, taking a look at the “whole”, we seem to be on track. Next saturday, Dortmund will welcome second league division promoted team Greuther Fuerth in the Westfalenstadion. They are currently ranked last in the league, already fighting for their Bundesliga-life. Another hard challenge that has to be accepted.