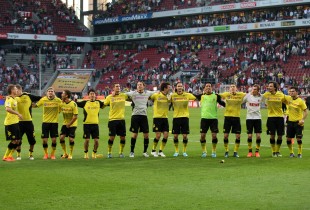 It has been quite a restless week and there was a lot of talking going on in the media, among the fans and basically everywhere someone had something to say concerning our team. Thank Footballgod that our team stayed patient and calm and gave the answers to all the talking during the week on the pitch. Six goals away in Carneval City Cologne were a perfect answer to everything and our boys are right on track again after Bayern and Schalke advanced in the table the day before.

Jürgen Klopp decided to change our formation on one position, giving Gündogan the chance to play from the beginning on after his fantastic last minute goal against Fürth- leading to the fact, that he sided next to Bender, while Kehl was watching the game from outside first. Our duo Bendogan was back. On Cologne's side Lukas Podolski was allowed to play again after he had to sit out for the last game due to an undeserved ban. Furthermore Lanig played for Pezzoni.
It was perfect footballweather. In front of the stadium Cologne's and Dortmund's fans intermingled on the grass in front of the stadium, drinking beer and having a bratwurst. Everyone was in a good mood and eager for the game to begin. 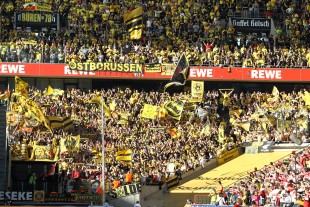 After those 120 minutes in Fürth one could wonder whether Dortmund would be able to find the strength for the upcoming 90 minutes in Cologne and even though our player tried to make the game in the first minutes, while Cologne was awaiting us in their half of the pitch, nothing exciting happened on either side. After 13 minutes then, the shock for us. After a terrible misunderstanding between our keeper and our defense, Cologne's Novakovic headed the ball above Weidenfeller into our goal. 1:0 for Cologne. What had happened there? Lanig's cross was long and Weidenfeller considered to leave his goal in order to catch the boal, however, there was no communication within our team and so Weidenfeller hesitated, then way too far outside his goal, and Subotic hesitated as well. Novakovic was faster and took his chance. Dortmund seemed shaken. This, however, was the first and only time we got to hear Colognes fans, since they decided to boycott the game or rather the support after the drama around one of Cologne's fanclubs who were supposedly involved in an action against Gladbachfans.

Our team tried to push forward, though it seemed that the 120 minutes they had played on Tuesday still rested in their bones. Our fans, on the other hand, were on and kept pushing our team forward. Three minutes after Cologne's goal Lewandowski tried himself with a header as well, Cologne's keeper Rensing was right on spot though. In the following minutes our team tried to build up some kind of dominance, but was way to uncertain in their actions and always chose the complicated way of playing over the simple rules like attacking over the sides. Finally in the 26th minute of the game it was time for our boys to celebrate. Schmelzer played a sharp free kick from the right side of the goalline and Piszczek used this chance to head the ball into the corner of Cologne's goal. 1:1. Finally a goal after a set-piece again. Haven't had that for a long time. 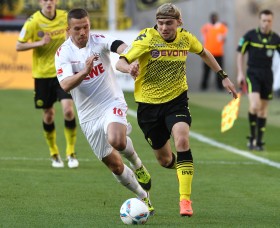 Three minutes later it was again Piszczek who had the chance to score the 2:1 for us by hammering the ball from quite a distance onto Cologne's goal. However, he missed by a few inches. From now on Dortmund tried a bit harder and gained the upperhand of the game, but after a duell with Subotic who struggled every once in a while when Podolski asked for a "who is faster- you or me?", Podolski tried himself in front of Weidenfeller, who saved the shot.
Shortly before the break then the 2:1 for us. Or so we thought. After a nice move from our side, Gündogan played a cross onto Piszczek into the penalty are who forwarded the ball onto Bender, who headed it into the goal. Unfortunately Bender was offside when Piszczek headed the ball and so the score remained 1:1. Time for a break and a probably very encouraging speech by our coach Jürgen Klopp. The mood in our block by the way was fantastic all the way through. We supported our team and sang and chanted, simply pushing them forward. 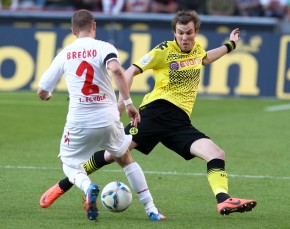 It was the first seven minutes of the second half that changed the game for good. Klopp's speech must have been a good one because after two minutes it was Kagawa who hammered the ball sharply under the crossbar into Cologne's goal from the right side of the penalty area. 2:1 for us and what a great goal by our Japanese boy. A free kick was played by Gündogan to the right where Kuba was waiting, he played a cross into the penalty area to Piszczek, who again moved the ball forward to Kagawa. The rest was joy and laughter.

Only a few minutes later it was again a duell between Subotic and Podolski which resulted in the fact that Podolski got a yellow card and demanded a penalty shot. Too bad, that the referee thought differently and let the game continue and before anyone was sure what the problem in the penalty area even was, the score was 3:1 for us. This time Lewandowski was the lucky man. After a nice one-two between Kuba and Kagawa, Kagawa forwarded the ball into the penalty area with his heel, where Kuba crossed the ball into the middle, Lewandowski only had to finish. Cologne was done for today. You could tell that they had given up and it was only a matter of how high the score would get on this sunny sunday afternoon. The mood among us was amazing and in Cologne's stadium you could see black and yellow on pretty much every stand. We celebrated ourselves, we celebrated our team and Kehl and Perisic came in for Bender and Großkreutz. 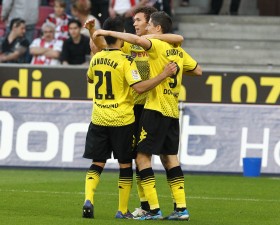 And since this game was not over yet, the score was suddenly 4:1. After Lewandowski conquered the ball in the center of the pitch, passed it on to Kehl who played it onto Gündogan, who, together with Kagawa, did what one could simply consider as a lecture for anyone who does not know how to play football. A one-two between Gündogan and Kawaga lead to our hero from Fürth scoring the fourth Dortmund goal of the day. What an utter joy to watch.
By now the game was more cat and mouse since Cologne had completely given up on themselves. It did not even seem like they wanted to reduce the damage, they simply let us play the way we wanted to. And so we did. After 80 minutes the score was 5:1. This time- again Kagawa after nice pre-work from our Polish duo Kuba and Piszczek. And since five goals for us weren't enough on this day, Perisic was allowed to score as well. 6:1.
What a disastrous day for Cologne, who are now quite involved in the relegation battle again. After 90 exactly 90 minutes the game was over, Cologne was done and we were celebrating. 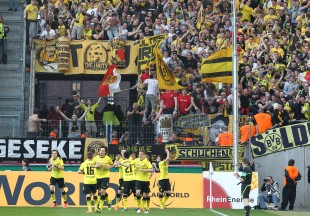 It was a difficult first half. After the game against Fürth you could tell that our boys seemed a bit tired at first and ran behind a 1:0 for Cologne as a result of that. After the break, however, the game couldn't have gone better. Or as Subotic would say later on. "Yes we were a bit tired, but when you start playing football like that and you get the room to play football like that, you don't think about being tired anymore, you just enjoy to play." And we most certainly enjoyed to watch. Our support on this day was amazing. And when we sang "German Champions get up" you could actually tell how many Dortmundfans were in the stadium, all over the place. A day in the name of black and yellow. I am incredibly proud of this team that they have stood up to all the things that have been going on during the week, that they stayed strong and calm and found the answers to all the mocking from Bayern Munichs side on the pitch. Dear Ballspielverein, let the others talk, we simply play football.

Thank you for six amazing goals and a season, so far, that couldn't have been better. If we compare the table of this matchday from last year with this year, we will notice that we have the same amount of points but a better goal difference. So among with the new records we keep setting up we even top our own game from last season. However this season might continue, Dortmunder Jungs, we are proud of you and thankful for all the joy you bring. Heya BVB!