A great way to finish an amazing 2012 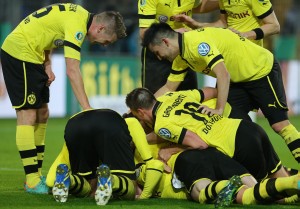 Thank god it's winter break. Not because of the recent appearances of the Ballspielverein Borussia over the last weeks, because they were quite good and we made it to the next round in all of the three competitions. But all of the supporters and officials could need a break after the last round of protests and the passage of the security concept presented by the DFL. Yesterday, some atmosphere found its way back into the Westfalenstadion but even though the ultras proclaimed before the match to be quiet for another twelve minutes and twelve seconds, most of them remained silent for the whole 90 minutes which created an unusual atmosphere in the most beautiful stadium of the world. I just hope that the winter break gives enough time for all sides to calm down and to make new plans of how to go on so that the Westfalenstadion will stay a power and something to be feared by our opponents. 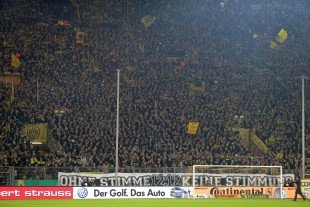 However, this report will now focus on the DFB cup match against Hanover 96 which was the last match for Borussia in an incredible year of 2012. I will start with the line-ups because Sebastian Kehl was able to get back to competition and took the place of Moritz Leitner beside Ilkay Gündogan. Marcel Schmelzer was still missing so Kevin Großkreutz stepped in as the left defender while Kuba, Reus and Götze formed the offensive midfield behind Robert Lewandowski. Hanover missed Andreasen, Felipe and Stindl and came to Dortmund after a first round in Bundesliga competition which went up and down. However, Hanover was no good luck for our team in the last meetings in the DFB cup so I was expecting a very tough game for our Ballspielverein. But after less than 120 seconds, I was proven wrong...

I was proven wrong because it took less than two minutes for Borussia to gain the lead. Mario Götze was set in action by Kevin Großkreutz with a nice cross and scored with a header. It is not very often that Götze scores with a header but this evening, everything seemed possible for our number 10. The early lead brought self-confidence and Hanover saw no hopes in the Westfalenstadion because the black and yellows were in full control of the match. Several chances followed with Hanover goalkeeper Zieler beating Lewandowski in a one on one, Lewandowski slightly missing with a header after the following corner kick and Hummels being too surprised standing in front of the goal totally after a free kick by Reus. 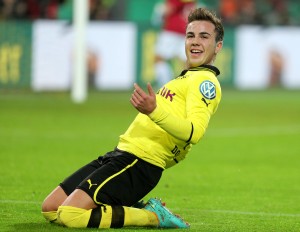 What followed was the next goal of the match, when Reus assisted Kuba who needed a lot of luck to score, but he got it and doubled the lead. The first shot of our right defender was blocked by Zieler, however, the block went to the breast of Kuba and from the breast directly into the goal. Borussia was two goals ahead and only 18 minutes had been played. What a way to celebrate the 103rd birthday of the Ballspielverein. For some reason, Hanover never found any control in this match so that the lead was totally deserved and even expanded shortly before half time. Lewandowski, Reus and Götze assembled in front of a free kick from a promising situation, Götze took the chance and used a brilliant tactic to score his second goal in the match. With a flat shot, he left goalkeeper Zieler no chance because one of the players in the defensive line jumped over the ball to make enough way to score the 3-0. Hanover showed no effort during the whole match and the match was more or less decided when both teams went into the half time break.

The second half started the same way the first half ended. Hanover seemingly did not want to participate in this match and Borussia wanted to end the year with a bang and nice combinations. Other good opportunities followed with a header by Subotic and a goal by Lewandowski, which was not awarded by the referee due to the Pole standing off-side. Even Hanover scored in person of Christian Schulz, but the 3-1 was not awarded as well because of an off-side position. However, Borussia did not go full throttle after one hour and the match only gained highlights during the last ten minutes. Hanover scored – and this time, the goal was awarded. 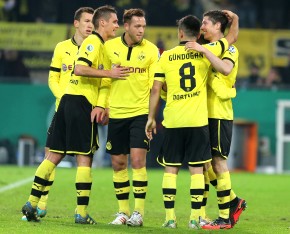 Diouf eventually took the opportunity of the BVB defense being asleep and after 79 minutes, it looked like the match could become interesting again. However, Borussia's efforts increased for another time and Mario Götze scored his third goal with a nice volley shot after a cross by Lewandowski and Lewandowsi crowned his great performance during this match with the 5-1 even though he was lucky that the ball hit the post after his header and landed right in front of him. 5-1, another victory and the advance to the quarter finals of the cup. Good job, Borussia and a really good way to finish off 2012.

The big news of the evening followed after the match. Olaf Thon, being a former Scheisse player, drew the matches of the next cup round and – no surprise there – draw Borussia away at Bayern Munich. With the rest of the teams left in the cup, it can be said that it could be the decisive match of this year's cup competition. And of course, it will be a very tough challenge for our BVB even though they proved that they can win in Munich more than one time over the last few weeks. However, now it is time to go into the break, gain new powers and start off fresh in January. That being said: Happy belayed birthday, Borussia and Merry Christmas!

Subs: Schlaudraff for Pander (30th), Sobiech and Sakai for Ya Konan and Cherundolo (67th)