New York's Football Factory at Legends ? better than ever! 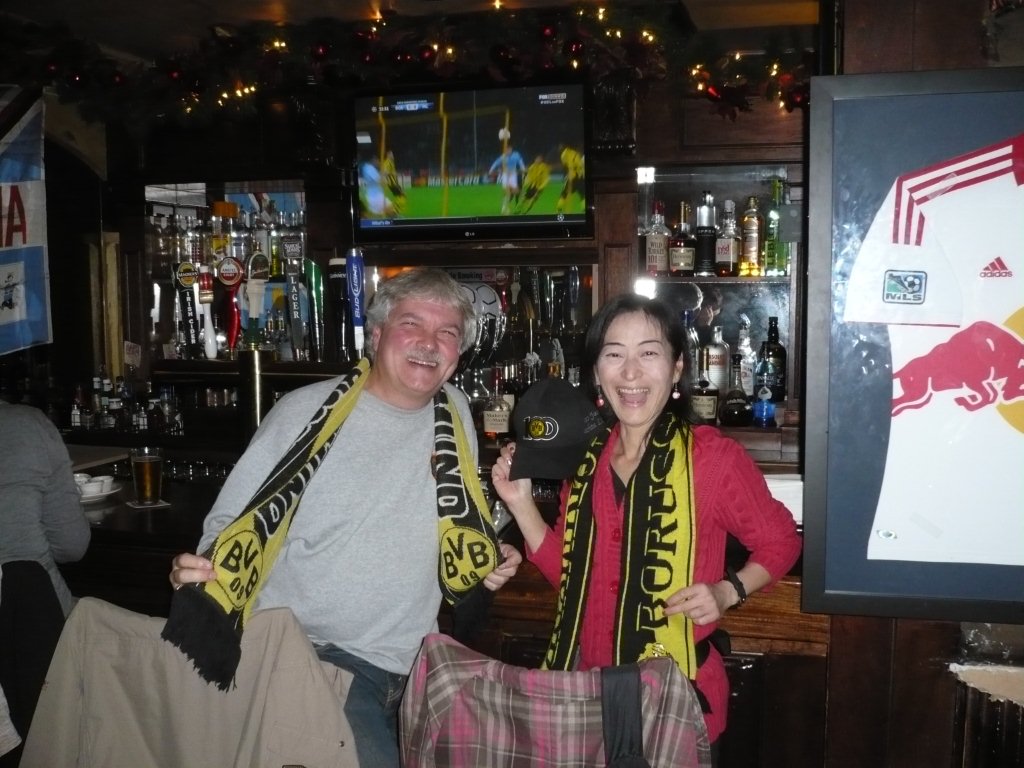 At first I have to make a confession. One of my great passions is without a doubt Borussia Dortmund – it's the main reason why I'm writing some reports here from time to time. The other passion is that I'm a really big New York fan. Of course there are a lot of different meanings about the pros and cons of the "Big Apple". But my opinion about New York City is clear: I'm sure it's hard to find another city where you can find a new attraction even nearly at every corner of the street. And very often you will find some attractions or places of interest which are not mentioned in any of these hundreds of tourist guides about New York City and especially Manhattan.

Last year I wrote a report about the sportsbar Football Factory at Legends, without a doubt the best place to watch live matches of the European leagues.

Today I will add another chapter about this fantastic sportsbar which should be a duty call for every Borussian and football fan. This year we spent again one week in New York at Christmas time and - no question - my wife Cornelia, my brother in law Wolfgang and me watched the matches of the one and only Borussia against Bayern Munich and Manchester City again at Legends, 6 West, 33rd street, opposite to the Empire State Building. The Legends is a very big but also nice pub with a lot of tables a long bar and homelike furnished. But the most important room of this pub for football fans (I hate the word "Soccer") is definitely the big room downstairs. You will find a lot of TV screens, football souvenirs like flags, pennants and scarfs at the wall. And very important: fans from different clubs all over Europe and also South America are watching the matches of their favourite teams live on TV. 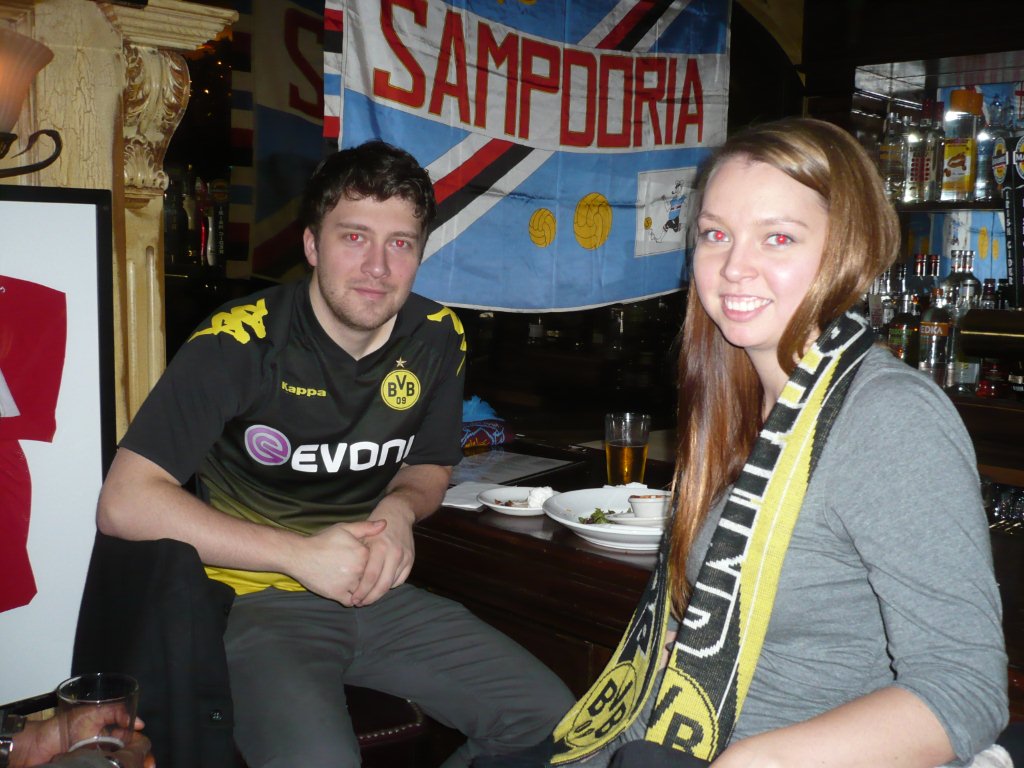 Last year in December we made a gift to the people at Legends when I gave a Borussia Dortmund pennant and a black yellow scarf to Jack Keane. Irishman Jack is the boss behind the bar and Director of Football at Legends. And very enjoyed we took notice that both items in the best colours of the world are still in their places. The BVB pennant hangs beside one from Blackpool and the black and yellow scarf between one from Napoli and Milan. In politics and economy the neighbourhood isn't always so quiet and peaceful. But of course that's totally another topic.

When we watched the match against Bayern Munich the Bayern fans had the majority. It wasn't the situation that we could recognize them due to the colour of their jerseys or scarfs. Only one of them wore a Bayern jersey, but when Toni Kroos scored the 1:0 for Munich a lot of people cheered about the goal. Maybe it was too plebeian for these Bayern supporters too watch the match with a football shirt or a scarf of their beloved club from the south of Germany. Is this typical Bayern behaviour? Maybe, that's the situation for a lot of them. But the same people became very quiet after Mario Götze's fantastic 1:1 which was also the final result. "Thank God! You had such a lot of luck" one of the Bayern supporters said to us. "You had enough luck during the last decades" I replied" and much to my surprise he said "Yes, that's right". Was that a new Bayern objectivity, slowly growing up? We couldn't discuss it because directly after the final whistle all Bayern supporters left the pub. Jack Keane introduced me to Peter, a Dortmund born Borussia supporter, now working for the United Nations in New York, who is watching regularly all the Dortmund matches at the Football Factory if it's possible. A real proof, that New York is no more a "no man's land" for BVB fans. Another proof for this is the still increasing number of Dortmund fans of "Borussia Dortmund NYC Supporters Club" on facebook. Around 40 group members of the Football Factory Borussians on facebook – not so bad when having in mind that the Westfalenstadion is more than 6.000 km away!

The next match against Manchester City we watched together with the Japanese lady and Shinji Kagawa fan Chikako. We met her two years ago when we also watched a match of Borussia in Manhattan, and from there on we are still in contact. Even when Shinji has left us with direction to ManU she is still in loyal friendship to Borussia Dortmund. Absolutely the right decision Chikako! And a big compliment to your taste of clothing! Your BVB cap as well as your black'n yellow scarf looked very nice! We were a little bit surprised that no ManCity supporter watched the match live on TV. 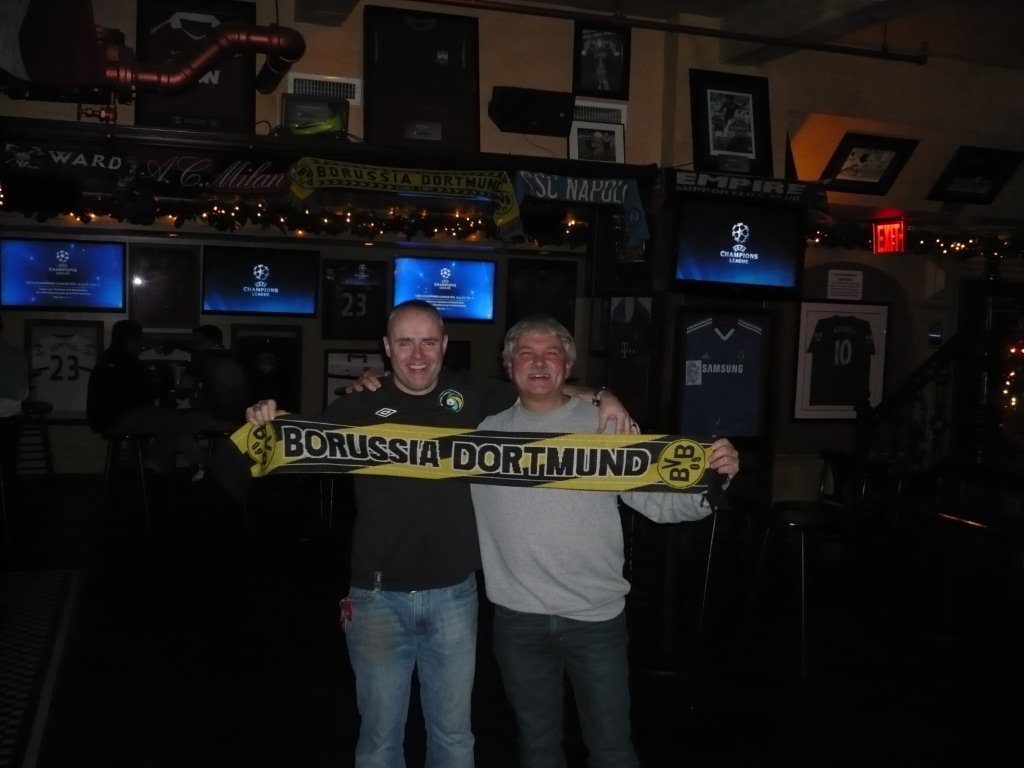 I think if ManU would be our opposing team that day it would have been a total different atmosphere. So we watched our 1:0 win and the goal of Julian Schieber on two big screens, beside some lucky Paris Saint- Germain fans, celebrating their 2:1 win against Porto. But instead of missing ManCity fans we talked a lot with Lisanne and Nicolai both Dortmund supporters from Dortmund and now working in New York. Without a doubt, the world is getting smaller and the chance to find Borussia Dortmund fans all over the world is becoming bigger and bigger.

After the match and a drafted Guinness we said "Good Bye" to Lisanne and Nicolai and Jack at the bar. Some last photos had been taken and if we will visit New York next year in December it will be a must to visit Jack and his team at the Football Factory again. When we left the sportsbar Jack mentioned that he would like to watch a match in the Westfalenstadion maybe, in the next or the following year. Our answer is clear: Jack you are always be welcomed to Dortmund! And with this little report I will confirm it in writing: Tickets for you, your family and friends will be procured. And there should also be time enough for a Dortmund pub tour!