Ask the editors #2 - The derby, tifos and more 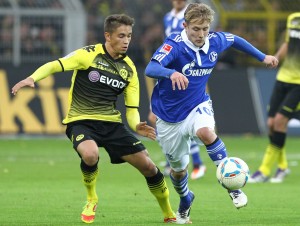 In this year's March, we started a new series giving you the opportunity to send in questions about Borussia which will then be answered by our editors. Once again, three readers sent in some questions so we will discuss the history of the rivalry between Borussia and Scheiße 04, the creations of choreographies on the Südtribüne and some little questions in the second episode of "Ask The Editors". Thanks to our three readers who sent in the questions.

Where and how did the BVB-Schlacke rivalry start? Is it economic or social like the Sunderland-Newcastle Derby? Political like El Clasico? Or did it start from just negative fan/player interaction?

Of course a very interesting question. To make it clear at this point: rivalry and a fair competition will be OK and necessary from our point of view. But violence or threat or force has nothing to do with football!
Up to now we count more than 140 derbies Borussia against Sch...e and to be honest there was no rivalry at first. Older experts see the beginning of the rivalry in the year 1947 when Borussia Dortmund won the final of the Westfalen cup in 1947. All the years before Sch...e was the dominating team in Westfalen and also for many years all over Germany. And it's no secret that a lot of people in the region around Dortmund had a lot of sympathy for the team in blue and white. But until the end of the postwar period Borussia Dortmund became the rival # 1 for the club in Gelsenkirchen. There was no influence of economical or political elements. So the main reason for this big rival 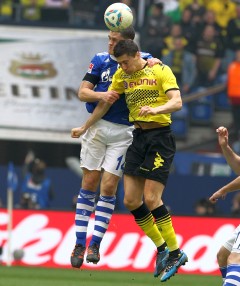 ry was in the beginning only a sportsmanlike competition of two towns in the industrial "Ruhrgebiet" area, both 30 kilometers away from the other. The big rivalry and hatred with a lot of riots and punch-ups began during the seventies when Sch...e was deeply involved in corruption and manipulating of matches and Dortmund had to play for 4 years in the second division. The relationship between the clubs astonishingly improved a little bit when Borussia became Deutscher Meister in 1995 and 1996. Sch...e won important matches against BVB's rivals Bremen and Bayern at the end of both seasons and in the eyes of a lot of Sch...e supporters their club was also responsible for Borussia's success. Absurd views, but even stadium announcer Norbert Dickel said "Thank you Gelsenkirchen" (not Sch...e!) on last matchday 1995 against Hamburg. But these times changed quickly and former rivalry returned again. In this pre-match report from 2009 you will find further details about the long time rivalry between black'n yellow and blue white.

What are some of Schlacke's most despicable actions of the past 10 years or so?

We think fans from both clubs could list a lot of despicable actions from their point of view. It also depends on individual impressions. But luckily this is not an Internet fanzine for Sch...e fans. So here are a few examples for the attempts of Sch...e, to anger Borussia and Borussia's fans during the last years:
Near to the end of season 2006/2007 Borussia struggled hard with relegation and Sch...e was on top of the table. So all Sch...e fans were full of hope to win the Schale for the first time since 1958. The dream of every hardcore and loudmouthed Sch..e fan was kicking Borussia in our Westfalenstadion into the second division and becoming Deutscher Meister in Dortmund on penultimate matchday. Gerald Asamoah, now striker for newbie Fürth added fuel to the flames when he announced to walk 30 kilometers from our Westfalenstadion to Gelsenkirchen if Schalke would be the new Deutscher Meister on derby day, May, 12th 2007. In addition to that thousands of Sch...e supporters met before the match at Dortmund's central station for a march like soldiers through Dortmund's city. One week before, they had presented the same arrogant procedure in Bochum. Most of them wore t-shirts with the logo "Nordkurve in Deiner Stadt".

This should stand for "Dortmund is our territory now". A pure provocation for Borussia fans and a lot of work for the police to separate Sch...e's from Borussia's fans during this needless and unreasonable activity of Sch...e. We all know the end: the blue and white loudmouthes got their rightful punishment with a 2:0 defeat in our Westfalenstadion! Partytime in Dortmund, deepest depression in the suburb of Gelsenkirchen and Stuttgart became Deutscher Meister one week later. Another inglorious chapter was the burglary of Borussia's 60 meter long banner from our Südtribüne. Maybe it should be a kind of revenge for the joke of some Borussia fans, when they flew above Sch...e's arena with a sporting aeroplane at last matchday 2006/2007, presenting a big flag "Ein Leben lang keine Schale in der Hand" ("You never will be Deutscher Meister"). But that's a big difference: The airplane was a joke, of course with a lot of black humour but nothing had been damaged. But stealing a banner is criminal, even more when Sch...e fans presented fragments of the destroyed banner in Gelsenkirchen's gym during the derby 2009. Housebreaking, theft and malicious damage – what glorious "fans" of Deutscher Meister 1958!

As a BVB fan from afar here in the USA I am mesmerized by the stunning tifo displays the Südtribüne pulls off. I cannot wait to see these in person one of these days. Could you shed some light on what goes into planning and implementing these massive tifo displays? Who comes up with the ideas? Who provides the man power to make them and where do they work on these projects?

The great choreographies we see on the Südtribüne are all fan-made. Unlike tifos the national squads present before World Cup qualifiers of friendlies, they are not sponsored by the club at all. The big Ultra fan clubs like "The Unity" or "Jubos" are responsible for big choreographies in Dortmund. Of course, it is hard to imagine how they are developed exactly. However, it is likely that the creative guys of the Ultras come up with an idea which is then discussed, discarded, accepted or developed further. 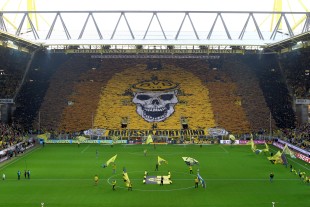 Of course there is no need to point out that those groups put in an immense effort building these choreographies in their free time. Several members of the group come together in a big warehouse to give enough space to build a big tifo which at times fills big parts of the entire Südtribüne. Of course, some co-operation with Borussia is needed as well since the creators need to get in the stadium early to prepare everything. Another important factor to consider is the cost of these amazing pictures. Therefore, groups like "The Unity" have a special cash box in which donations are collected. To give an example, the choreography before the cup final in Berlin this may, cost more than 15.000 Euros. You need to respect everyone responsible in the creation of a choreography which lasts only for a couple of minutes but presents a brilliant picture in the Westfalenstadion and certainly is a motivation for the players on the pitch as well (as Mats Hummels admitted during an interview with schwatzgelb.de). However, pictures speak louder than words so I need to link to the video "The Unity" uploaded after a nice choreography against Arsenal London last season which shows some of the creation process as well. Have a look here.

Jennifer from the US:

In the DFB cup game this weekend, Alan Fountain mentioned the 3rd division is considered professional. Are all the players paid? Or is it a club-by-club basis?

The three upper leagues in Germany are indeed considered professional. This also means that every player in the third division is paid for playing for his club. However, even players of the other divisions are paid for playing as well though the amount of earnings decreases from division to division of course. However, you can be sure that even in the fourth or fifth division, most players are paid as well, independent of which club you play in.

Why were Dortmund AND Oberneuland wearing Volkswagen patches during the cup game? 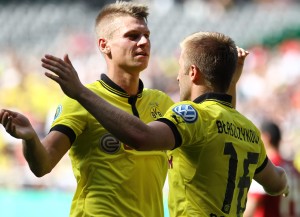 I was confused to see the Volkswagen logo during the cup matches as well. It stems from Volkswagen being the new official sponsor of the German national cup. Every team had the patch of VW on the jersey during the first round and will be wearing it over the next rounds as well.

I was watching Eredevsie this morning and the announcers mentioned that in Scottish league, the current league champions not only play with a gold patch, but all their games are played with a gold ball. Has this ever been done in Germany?

Nobody of our editors can remember such thing so it has most certainly never been done before.

I was reading about Dortmund's family day and they were having people tested for bone marrow for Cristoph who has leukaemia.... is he a Dortmund player? Plays for another club? Staff of a club? Just curious since they drew such a big support.

He does not play for a club at all but is a huge fan of Borussia. The club heard about his case and decided to help him finding a donator to save his life. Nice gesture of BVB definitely.

If you still have some questions on your own about anything about Borussia, feel free to send them in to vanni@schwatzgelb.de. We will collect your e-mails and answer them in a later edition of "Ask The Editors". Just make sure not to ask about ticket issues since this is a topic we already evaluated on several times. However, all other topics are welcome.