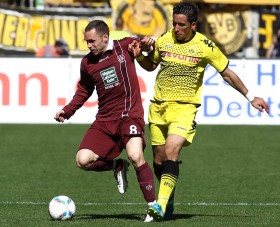 It is game 34 of Bundesliga season 2011/2012. Like last year, Borussia is already German champion since two weeks. After struggling for some weeks, Borussia has once again dominated the whole Bundesliga, defeated Bayern Munich twice and won the derby twice. How awesome has this season already been? The last defeat is eight freaking months away, Borussia started an impressive run since that match in Hanover. Looking at the stats, this season seems more impressive than the last one. However, there is still one more record to conquer. With a victory against SC Freiburg on Saturday, Borussia can become the best German champion in the history of the Bundesliga.

Until now, this record belongs to record champion Bayern Munich who went for 79 points compared to the three-point-rule. And yes, I am pretty sure that this young team of proud Borussians is still hungry enough to want this record. Even though there will be enough to celebrate after the final whistle on Saturday, I am pretty sure that every Borussian will give 100 per cent one more time, just one week away from the cup final in Berlin.

Looking at the opponent, it needs to be pointed out that SC Freiburg is not an easy opponent to defeat. Even though Borussia has great stats against the team from the south (only one loss ever at home), 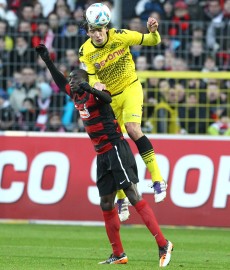 the new coach Christian Streich has turned this club from a team fighting against relegation to the fifth-ranked club of the second half of the season. Even though the name of "SC Freiburg" sounds like a save victory for impressive Borussia, the way to the final record of possible 81 points will not be a way without objectives.

An important question which is often asked on the last day of the season is the question concerning line-ups. Patrick Owomoyela will not play due to an injury he suffered this week and won't be able to be ready for the cup final as well. Lucas Barrios who announced to leave Borussia directed to China suffers from minor problems with his calf. The rest is hard to predict because we surely did not expect to see the line-up we saw in Kaiserslautern one week ago. Marcel Schmelzer could be back in competition and Roman Weidenfeller will be back in the goal. Mario Götze will get one more chance to gain match practice before the cup final and is most likely to start. I would assume that Felipe "Tele" Santana will start and get one final match before he is likely to leave us this summer, Florian Kringe could be brought in once again and even Shinji Kagawa could make his last appearance in black and yellow.

After ninety minutes on Saturday, it will be time to celebrate once again. Borussia will get the Schale back and it would be nice to see skipper Kehl raise it this year. Dortmund will once again be packed in black and yellow and the night could begin. 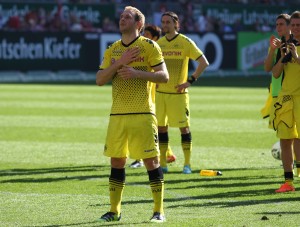 So even though Borussia goes for another record in this historic season, in the end we will have enough time to celebrate before once again focusing on the next match in Berlin where another important record could be broken since Borussia has never won a double in history of this amazing club.

Attendance: 80.720 (for the 13th time this season, Westfalenstadion is sold-out)