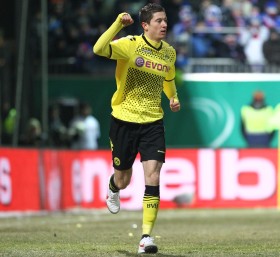 For some weeks now, everyone talked about the results of the Bundesliga every weekend. About how Bayern Munich struggled at the beginning of 2012, leaving place for Borussia to extend their lead at the top of the rankings. About the "comeback" of Bayern Munich with 20 goals in a week and Borussia's new record of 20 unbeaten matches in a row, about the tie away at Augsburg... to put it simple: everyone talked about the fight for the championship. Today is different. Today is only about (at least) 90 minutes, about one match which is decisive, about one away game which keeps us away from fulfilling another dream with coach Jürgen Klopp. Today is not about gaining three points for the Bundesliga, but simply about winning. Today is about the German DFB Cup, today is about the match in Fürth, today is about reaching the final at May 12th.

During the course of the cup, Borussia had what others call luck but what I call special challenges. Borussia could reach the final of the cup without ever facing an opponent from the Bundesliga. We started up in Sandhausen (league 3), beat Dynamo Dresden (league 2), travelled to Düsseldorf (league 2) and witnessed a real classic and eventually ended up in gaining the victory away at Kiel (league 4). Today, the next opponent is the Spielvereinigung Greuther Fürth recently residing at the top of the ranking of the second Bundesliga. While critics would say that Dortmund did not prove anything at all by marching to the final by beating lower class teams, I would even claim that they proved more than they could prove by only beating teams from the first league.

Let's face it, when the Deutscher Meister plays against a team from a lower class, there is only one team which could lose it all: Borussia. 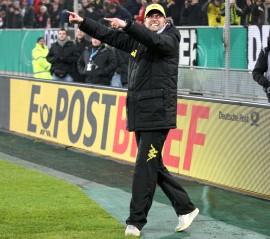 For the opponent, it always is the match of the year and teams like Kiel have nothing to lose. They are highly motivated, believe in a miracle and like the old saying, the cup has its own laws. Borussia have struggled numerous times in this kind of competition. Even in the last seasons, they lost to clubs like Osnabrück (league 3) or Offenbach (league 3 as well). Therefore, victories against smaller clubs are telling quite as well. Especially when you consider that Fortuna Düsseldorf was the leader of the second Bundesliga in December and Greuther Fürth is now. However, I need to point out that there always is the danger of underestimating your opponent. But Jürgen Klopp and his team are clever and experienced enough not to do so. They know about their opponent and will not take this match easily. One warning for Borussia should be the fact that Fürth did not receive a goal during this year's DFB cup, something only done by Borussia as well.

For international supporters, the name of Spielvereinigung Greuther Fürth should not ring many bells. Over the last years, Greuther Fürth always fought for promotion but failed in the end. This year they could finally end up in the highest league of German competition as they play constantly but nothing is decided in that league as well as in the first one. 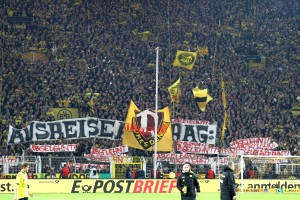 On the website of Greuther Fürth, you could read "Here you can find all the information about the most beautiful club in Germany" which brought Jürgen Klopp to ask on the press conference whether they have so much information about Borussia on their own web appearance. It is impossible not to like this man. Real Love.

Two names of Borussia's opponent for Tuesday evening, however, should be known to some of you. Mike Büskens is not only the coach of Fürth but also one of the so-called "euro fighters" of Scheisse 04 who won the UEFA cup in 1997 (which is no comparison to BVB winning the Champions League in the same season, suckers!). In interviews, Büskens always states that he is happy in Fürth but never denies his love for the rival from the Ruhr area. No question that he would be extremely happy with a victory over Borussia tonight just like Gerald Asamoah, another person with a negative blue white background. Asamoah played for Scheisse for years and on the one hand was one of the identification figures for the fans of S04 which made him one of the most hated players for BVB supporters on the other hand. The hatred against him even increased in a derby when he had a big confrontation with Roman Weidenfeller, claiming after the match that Weidenfeller had called him a "black pig". If he plays for Fürth tonight, Asamoah will be motivated as well since it could be his last opportunity to beat the bitter rival because he is not the youngest (and most talented) player available anymore.

So there are enough stories and enough tension for the semi finals of the cup. After the last final against Bayern Munich in 2008, it would mean everything to reach it once again this season as every supporter of Borussia is dreaming of winning the cup after 23 long years, after the final where Norbert Dickel became the hero of Berlin and a legend forever kept in BVB history. 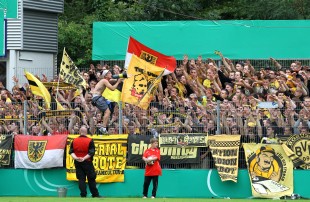 The possibility of winning the double this year is still an option and probably would be one of the biggest achievements of the last decades.

Speaking of line-ups, Jürgen Klopp pointed out that he is extremely happy to have all the options he could have for tonight's match. Sven Bender is an option for the starting eleven again and besides the long-term injuries like Mario Götze or Julian Koch, everyone is able to make it to the line-up. However, Klopp did not speak about the squad in detail so it is hard to tell if he gives Mitch Langerak another chance to prove himself like he did in Kiel or against Dynamo Dresden before. We will see tonight, but most importantly, we know that every possible combination of eleven players has the potential to beat Fürth. Not only the Fürth players are willing to go to the final, the Borussia is hot as hell as well. March on, black and yellows, lead us to the final and make us proud once again!