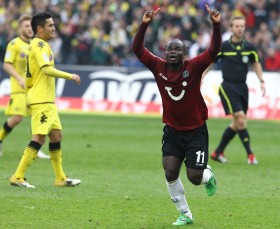 The year was 2011. On September 18th of the last year, Borussia Dortmund had to face Hannover 96 away in the capital of Lower Saxony. For 70 minutes Borussia controlled the match, but in the end there was a 2-1 loss and no profit. Nevertheless this matchday presents a huge turning point for the Black and Yellows: During the following matches no other team was able to defeat Borussia! 42 of 48 possible points were gained, 2.63 points per match, 40 goals towards only 8 goals against us. And now again Hannover, the end of the current run?

The Lower Saxonies validated their good performances of last season and are currently undefeated for 09 matches. Furthermore the club reached the round of the last sixteen in the Europa-League. On the last weekend the Swabians from Stuttgart got the stick by 96. 4-2 was the end result. The main weapon of Hannover 96 is the fast shift between defending and counterattacking. In a last year's tactical analysis it became clear, that the team of Hannover only needs ten seconds to reach one box from another. This is probably what coach Mirko Slomka expects from his players. Furthermore the team has improved its corner and free kicks. It will be a tough task for our central defenders around Mats Hummels to keep a cool head. 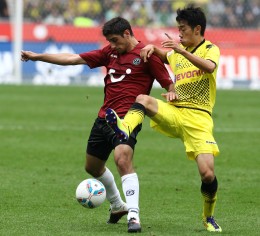 As already mentioned before the domestic bliss of Borussia Dortmund is anything but bad. The absence of key players like Mario Goetze and Shinji Kagawa was absorbed by the other teammates that are not regular starters. The last matches were quite close. Especially the match against Hertha BSC, when 20.000 fans supported their team away, showed a lack of creativity. But the miracle healing of Shinji Kagawa – he suffered from a torn ligament – gives hope. According to coach Juergen Klopp, it already “looked quite good” when he returned to squad training this week. Asked on the dangerous corner and free kicks of Hannover Klopp repeated, that this fact does not bother him that much but simultaneously warned: “Pander takes the free kicks really good, and Pinto does not take them much worse from the other side.”

The Young Guns are warned. Klopp verified that Hannover 96 has stabilized on a high level. “Mirko Slomka does a really good job”. The first blink of the matchday is the fact that Borussia Dortmund will not loose the lead due to the fact, that the ponies from Gladbach were only able to gain one point out of the match against Hamburger SV last evening and FC Bayern Munich and Scheisse 03+1 will face each other. Will Borussia be the great winner of the matchday and increase its lead? I expect a close match on Saturday afternoon against Hannover 96, but the current run gives hope. A funny fact: Borussia Dortmund is the only team of the Bundesliga which cannot be relegated.