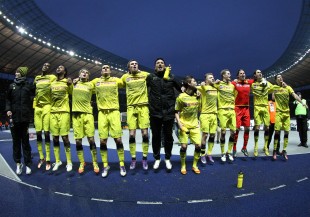 It was a match in which Borussia had hardly anything to win, but everything to lose. Not beaten for 15 games in a row, Borussia travelled to Berlin. A team in a free fall which has recently fired coach Michael Skibbe and presented legend Otto Rehhagel as the follower after the match. With a victory, the whole football world would have said "Okay, you could expect that from the Deutscher Meister" but with a loss of points, Borussia would have been laughed at by everyone. However, Borussia won the match and even increased the lead to Bayern Munich who only secured one point away at Freiburg. Furthermore, Borussia once again proved that it has gained the ability of winning a match with hard work, few chances and against a defensive opponent.

Over 20.000 Borussians travelled to Berlin to support their team in the Olympiastadion. An impressive number when you think about the fact that supporters of other clubs have problems reaching an attendance of 20.000 in a home game. A great atmosphere could be felt around the Olympiastadion when you saw so much supporters of the Ballspielverein in front of the stadium. However, the securities of Hertha BSC were not as happy seeing this number of fans in black and yellow as they heavily examined every attendant and I had to show my ticket two or three times until I managed to find my place in the guest area which is a pretty special one because the whole Olympiastadion is filled with seaters. 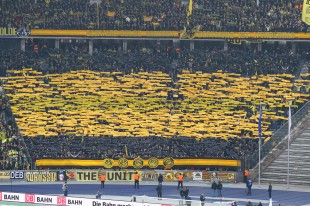 There are no official standing terraces but the fans of both sides did not care about that and while the squad marched on the pitch, the BVB fans presented a nice choreography to stand their ground at the opposing stadium. Concerning the line-up, Shinji Kagawa had to be replaced due to his minor injury which was announced over the week and will keep him out for one more match. Robert Lewandowski was drawn back and took the spot of the young Japanese while Lucas Barrios was in the starting eleven and the only forward in the system of Borussia. That was the only change made to the team of Jürgen Klopp who still misses Mario Götze for a few more weeks. Mats Hummels had a flu but decided to play which was not a good call in the retrospective. On the other side, Hertha BSC missed four important players in Franz, Lell, Lustenberger and Ottl. Nice to point out that Rene Tretschok, a former player of the Ballspielverein was the interim coach for the match and will now go on to be the assistant of Rehhagel.

Like I already suggested, Berlin tried to maintain a solid defense against the German champion and did a good job doing so as Borussia had some problems to create good opportunities and you could feel that the creativity of Shinji Kagawa was missed on that Saturday. But after a cross from the right by young Pole Piszczek, Lucas Barrios tried a first header onto the goal of Thomas Kraft (former Bayern Munich goalie) after eight minutes. The same players were responsible for the biggest chance of the first half when Pisczezk assisted Barrios and the forward with the number 18 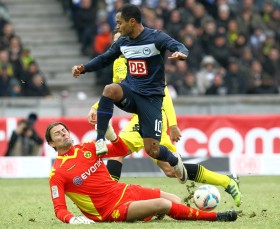 just needed to get the ball over the line but somehow failed by losing control over it after 30 minutes had been played. That must have been the lead for Borussia who of course had the control over the opponent without being totally superior in numbers concerning goals though. With the famous BVB supporters behind the goal of Hertha, Borussia tried to create more opportunities, backed up by the new chant of "Nananananana, heeeey, BVB" (not goodbye)-chant. But Hertha BSC had a big one in minute 35 when Mats Hummels dribbled through the own penalty area, lost the ball against Adrian Ramos and was saved by a great Roman Weidenfeller. Later on, Hummels told the press that he had fever attacks all over the match, apologized to his colleagues and thanked them for winning the three points – in his words - without one of the central defenders. The counter attack ended up with a corner kick for Borussia which resulted in two opportunities to shoot for Barrios who found no way getting the ball onto the goal because of several defenders of Berlin were in his way. 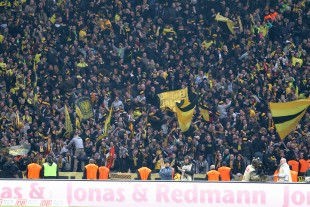 Just seconds before the first whistle, Robert Lewandowski sent Piszczek on the way to the Berlin goal but Kraft saved the final shot of the fast-approaching Piszczek who got hit at the head afterwards by a Berlin defender and had to be replaced by Patrick Owomoyela at the start of the second half. Piszczek was one of the best Borussians in Berlin so far but head injuries keep on following Borussia through this season unfortunately. Thomas Kraft was celebrated afterwards by the announcer of Hertha BSC – I don't see the necessity for doing so in football stadiums at all. Anyway, it was a goalless draw at half time in a match which was not very attractive. You could see that Hertha would have been satisfied with winning one point against the German champion (who could blame them for that?) and Borussia had some problems finding a way through their solid defense. Fortunately, that changed in the second half.

But the second half started with a good opportunity for Hertha BSC Berlin. Neven Subotic lost the ball at the height of the middle line, Raffael assisted Patrick Ebert (a good friend of former Borussian Kevin-Prince Boateng and one of his ghetto buddies) who slightly missed the goal with a shot from the right after Hummels did not attack the ball hard enough (48th). Four minutes later, Hummels gave possession away with a dreadfully misdirected pass, a shot/cross combination by Ebert, however, missed the goal as well as the legs of forward Ramos. Nobody had ever seen Mats Hummels in a shape like that on Saturday since he normally is the cornerstone of the defense of Borussia. 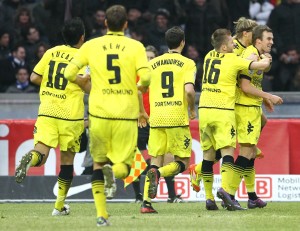 But the 20.000 BVB supporters in Berlin kept on chanting and hoped to help the team with the motivation of singing "Olé, here comes the BVB". Eventually, it helped indeed when Kuba had too much place on the right side and crossed the ball to the middle where Robert Lewandowski tried to gain the lead with a header. Thomas Kraft saved it with a brilliant reflex, the ball hit the post but sprang onto the pitch again where Kevin Großkreutz showed all of his brilliant technique by scoring with a bicycle kick – not a Brazilian one, but that did not matter at all since Borussia was in the lead after 65 minutes and the seventh goal of Kevin Großkreutz. Finally! However, that was pretty much it. Hertha had no big chances to score the equalizer and the only chance to double the lead was a minor one by Robert Lewandowski ten minutes before the final whistle.

Like stated multiple times before, the pure match was not worth the travel because it was not a great match to watch. However, pure matches are not what football supporters are about since sometimes, they just want to see a fighting team with a lot of passion, willing to do everything to get away with the victory. And we definitely got that. Matches like this one in Berlin, the home match last week against Leverkusen or the away match at Nuremberg are matches which are not easy to win, they are the so-called "work victories" since you need to do a lot of work for them. In the past, Borussia always had problems in winning games like that 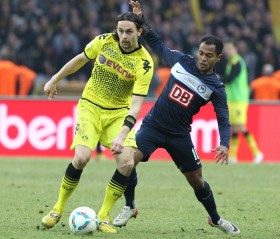 but in the end, they could be the ones deciding the championship since for example, Bayern Munich was not able to get those three "dirty" points in Freiburg. This means a lead of four points to the record champion and a lead of three points to the new second-ranked Mönchengladbach. Borussia is still the only team in German professional football which has won every match of the second half of the season and is still on a roll. And in the end, that is what makes a good away trip, accompanied by a great atmosphere in Olympiastadion which hopefully will see the beautiful colors of black and yellow again on the 12th of May, the date of the DFB cup final which is only one victory away for Borussia.