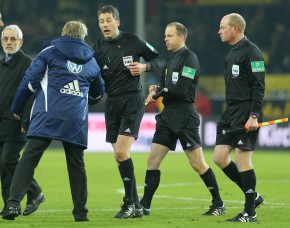 What was one of the defensive plays of this season turned into the beginning of a horrible afternoon in Dortmund. It was ten minutes to go in the first half, when Wolfsburg had its first real attempt for the goal. Vieirinha, though offside, was nicely released on the left, while Weidenfeller left his goal but could not reach for the ball. The Portuguese played the ball back to Dost, who would have scored the goal, if it hadn't been for Schmelzer to block the ball with his knee. Great play, but not, well, for referee Wolfgang Stark. For whatever reason, he felt that Schmelzer used his hands and opted for a penalty and a red card. An outrageous decision, and it wasn't Stark's first one.

Remember Mario Götze being sent off in Leverkusen last year for an assault, when his foot was not even close to whatever part of Hanno Balitzsch's body? Guess who the referee was. Remember Nuri Sahin having to repeat a penalty against Hoffenheim in 2010, when about five Hoffenheim players and one of ours entered the box too early? Guess who the referee was. Remember Robert Kovac's header in 2008, saved by a Hanover player about one meter behind the goal line, which did not result in a goal? Guess who the referee was. All of these decisions were weird and all of them changed the respective games massively, and this is what they have in common with yesterday's. This guy is the best argument for the use of video evidence during football games one can imagine. 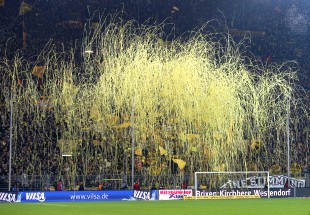 Before the penalty, Borussia was probably playing their best game so far this season. After no more than five minutes Dortmund had the lead as a consequence of a free kick by Reus, and several high quality opportunities for the Wolfsburg goal followed. Unfortunately, no second or third goal was scored, which had easily been possible. This is what the team can be blamed for, to not finish a game early in the first half by leading about 3-0. The rest is due to Stark, and the bitter story is simple to tell: Diego's penalty resulted in the equalizer, and a couple of minutes later Naldo scored with an, admittedly, beautiful volley from about the penalty spot. What a crazy first half. What should have been an easy win or at least a comfortable lead became trailing by half time with one player down.

Things did not change too much in the second half. Borussia, with Blaszczykowski replacing Schmelzer as the left back, was still the better team, but now had problems in creating oppurtunities for the goal. Another penalty brought the 2-2, however. Lewandowski was pushed in the back and brought down by Kjaer, while he was trying to control a high ball. An arguable decision which probably would have not been made without the first penalty. Blaszczykowski converted safely. But following the equalizer the game became an open one for the first time. Playing with ten men after a week with a Champions League game on Tuesdays costs energy, and Wolfsburg took the lead again when Dost was alone in front of Weidenfeller, following a loss of the ball in midfield and a clever pass by Diego. This goal somehow ended the game. Another free kick by Reus in extra time was the only opportunity we had to score for the third time. 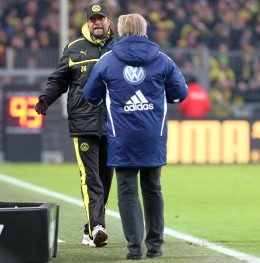 Luckily, the blue scum lost as well. For this reason, Borussia keeps the third spot in the Bundesliga which would secure another participation in the Champions League next year. The first half of the season ends next Sunday in Hoffenheim, another team from the bottom of the table. A win is more or less compulsory, given one wants to keep track with Leverkusen who remains second.