Duel of the giants 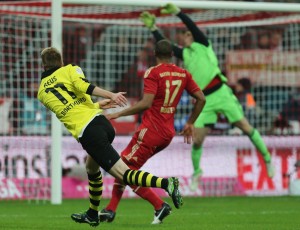 The match was broadcasted to 203 states around the world, millions of German football supporters were watching on TV and last but not least 71.000 joined the match in Munich. The clash of Bayern Munich and Borussia Dortmund was really a duel of giants. In the end both teams shared the points as it was 1-1 after 90 minutes.

Bayern Munich had a bad record regarding the duels with Borussia Dortmund during the last 2 season. 4 Bundesliga matches and the DFB cup final were lost. Especially the 5-2 cup final humilation was still in Bayern's mind. But this time the circumstances were different. Bayern Munich is playing an extraordinary season. With 37 points out of 14 matches the Bavarians opened up a gap of 10 points to second placed Bayer Leverkusen. Borussia Dortmund were even 11 points behind the Bavarian club. While Borussia is flying high in the Champions League, the third Bundesliga title in a row is miles away. Nonetheless it was still a match of much prestige.

Borussia Dortmund were coming from a lousy 1-1 at home against Fortuna Düsseldorf. For about 60 minutes it was an easy task. Borussia Dortmund hit a goal in the first half and Düsseldorf wasn't able to react. But the black-yellow boys completely messed up in the last 30 minutes as they gave Fortuna space to start own attacks. In the end Borussia Dortmund received the equalizer and the match ended 1-1. That was really a blow to all those, who had still little hope, that Borussia Dortmund could be a threat for Bayern.

Jürgen Klopp had to cope with the injury of Sebastian Kehl. But in comparison to the Düsseldorf match Hummels, Gündogan and Götze were back. In holding midfield Gündogan was playing together with Sven Bender. In attacking midfield Götze, Reus and Kuba started. Bayern Munich coach Jupp Heynckes left Mario Gomez on the bench and gave Mario Mandzukic another chance. In midfield Ribery was starting on the left wing, Müller on the right wing and Kroos, Schweinsteiger and Martinez were making up Munich's central midfield.

The match started as expected. Bayern Munich was on the button immediately and started their first attacks. A freekick taken by Toni Kroos in minute 3 was deflected and found Ribery, but his shot was wide. Only 1 minute later the first highlight on the other side. A pass by Holger Badstuber back to goalie Manuel Neuer didn't look dangerous at all. Neuer wanted to play a cool pass to one of his defenders as Marco Reus stormed towards him. Neuer's pass hit Reus, but the agile striker wasn't able to capitalize. But as said, Bayern was dominating the beginning of the match. Franck Ribery set the next highlight, when he passed to the far right post. Thomas Müller was waiting to convert, but Marcel Schmelzer cleared. And it was again Thomas Müller in minute 8. The young German national player stormed into the right side of the box and was just trying to fire a fierce shot, when Neven Subotic made a last desperate tackle and cleared the ball. But after 10 to 15 minutes Borussia Dortmund adapted to Bayern Munich's game. The midfield gave Bayern less and less room to create chances. Kroos had another distance shot, that was too high. In minute 16 Robert Lewandowski set up for Kuba, but the Polish national wasn't able to reach the ball. Mario Götze set a first personal highlight, when he dribbled from the right wing to the middle, parallel to the box. His nice pass found Sven Bender, but the holding midfielder wasn't able to fire a dangerous shot. And Götze was also part of the next arouser. A dribbling of him was stopped by Javier Martinez and Holger Badstuber. Unfortunately Holger Badstuber tore his knee in an ugly way. It was immediately crystal clear for everyone, that Badstuber was injured badly. In the end it was a torn cruciate ligament, that means the young Bayern defender will be out for about 6 months. Jerome Boateng entered the pitch to replace Badstuber. While everyone was waiting for the halftime break, there was a last late chance for Borussia Dortmund. A nice pass found Marco Reus on the left side of the box. Reus took the ball volley and aimed for the upper left corner. Manuel Neuer needed a superb save to prevent Dortmund's lead. 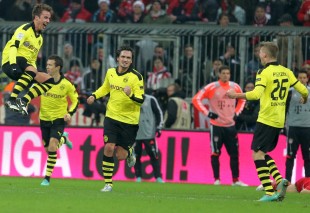 Both coaches sent exactly the same 22 players onto the pitch. In minute 50 Lewandowski had a first approach, but he was offside. Only 2 minutes later Schmelzer played a freekick nicely into Bayern's box. Mats Hummels sneaked into Bayern's box and was completely unmarked. But the Dortmund defender played a weak ball, that was no problem for Manuel Neuer. And it was now really a different match. Dortmund was now much more pressing and Bayern wasn't able to create many chances anymore. Mario Götze was set up in minute 56 with a fine high ball. The tiny German national managed to play a header, but that was way too harmless to be any task for Neuer. But Bayern was still there. Ribery made another fabulous run down the left wing and played past Neven Subotic. But his high cut-in was cleared by Mat Hummels. And Franck Ribery was still the only one, who was able to create any dangerous situations for Bayern Munich. In minute 66 he tried a spectacular bicycle kick, but missed the ball. Actually now the Bavarians were getting back into the match. In minute 67 a long ball found Thomas Müller in front of Dortmund's box. Marcel Schmelzer destroyed BVB's offside trap and so Müller was able to play a short pass to Toni Kroos. The talented midfielder made a nice fake, that sent Hummels and Subotic into the wrong direction and then finished with a beautiful left-footed shot into the right lower corner - 1-0 Bayern!

5 minutes later Dortmund had the chance to react. A mistake by Bayern Munich defender Dante saw Reus up and away. His pass direction Kuba was a too big task for our winger and so Boatend cleared. Jürgen Klopp reacted and sent Ivan Perisic onto the pitch. Kuba had to leave. In minute 74 Reus took a corner kick from the right side. The ball was deflected direction left corner of the box, where Mario Götze was waiting. Götze made a brilliant first touch and fired a fantastic shot into the lower right corner of Neuer goal - 1-1!

Neven Subotic got injured minutes later, when he was in a duel with Franck Ribery. He wasn't able to continue and so Felipe Santana got his chance. The last 10 minutes Bayern Munich was the better side. Jupp Heynckes fielded Mario Gomez. Only seconds later Gomez set up for Toni Kroos. Kroos nice shot was saved brilliantly by BVB goalie Roman Weidenfeller. 2 minutes later Thomay Müller played a high pass from the right side. The pass was not very accurate and suddenly headed for the upper left corner of BVB's goal. Again Weidenfeller needed his best to save. And to make it a threepeat, Weidenfeller made another fantastic save when he cleared a header by Javier Martinez. But that was the last highlight of the match. Referee Gagelmann finally blow the final whistle. 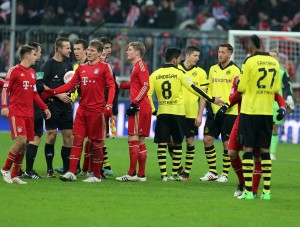 Jupp Heynckes: „ Wir started very good and dominated the first 20 minutes. But then we lost control. It was an intense match with both teams playing a modern style of football. But after the break we lost touch and needed 15 minutes to get back into the match. In the dying minutes we were clearly the better team, but Weidenfeller showed a fantastic performance. I don't know why this guy isn't playing for the national team."

Jürgen Klopp: "It was a great and intense match. Both teams gave it all. Regarding the last minutes we can be happy with a draw. Roman Weidenfeller secured the point. The result is absolutely ok. Many Bayern players congratulated Roman. It was his match."