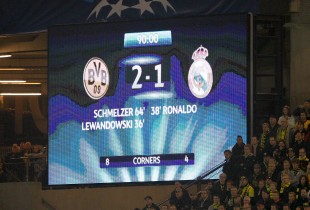 Bamm! There you go! A magic night saw Borussia Dortmund going to the edge and beating Spanisch giants Real Madrid CF in a hard fight 2-1 in the end. Despite the fact that Real fielded a bunch of top class players, this was Borussia night and the win was deserved finally. Robert Lewandowski and Marcel Schmelzer scored with football beau Cristiano Ronaldo hitting an early equalizer.

When the Champions League groups were drawn some weeks ago, everyone had one same feeling: Group D was a so-called „group of death". German reigning champions had to face the Champions of the Netherlands, England and Spain, in name that means Ajax Amsterdam, Manchester City FC and Real Madrid CF. That is what people call a real „Champions" League! But in return many supporters had somehow a feeling like finishing on the third spot woud be ok, as Real and Manchester City are star-packed teams. Especially the Royal club of Madrid was named favourite to top the group. And to fulfill this expectations, Real Madrid started with 6 points out of 2 matches. Starting with a hard fought 3-2 at home against Manchester City, they then trashed Ajax Amsterdam on the road.

But Borussia Dortmund had also a good start into the campaign. In their first match they got away with a narrow but deserved win at home against Ajax Amsterdam. In their second match they had to travel to England. Manchester City is a mighty force at home and as Borussia looked like, they have to battle with MCFC for spot two, a draw would have been fantastic...before kick off. The match itself told another story. Borussia outplayed Manchester City most of the time and created a bunch of chances. Marco Reus capitalized on a mistake of Manchester. But in the dying minutes the Englishmen scored the equalizer with a unjustified penalty. Nonetheless, Borussia showed on that evening, that they have more to offer than playing for the third place in this group.

Let's go in medias res. Real Madrid were in a comfortable position with 6 points out of 2 matches. But coach Jose Mourinho had to cope with a „real" problem. He had lost both left backs, Coentrao and Marcelo, due to injury and even right back Arbeloa was missing. So Michael Essien had to play on this position, despite the fact that he is a holding midfielder. Sergio Ramos was helping out on the right back position and young French talent Varane was playing besides Pepe in central defence. German national Khedira and Alonso set up the holding midfield. In front of them di Maria, Özil, Ronaldo and Benzema made up Real's big name offence.

Jürgen Klopp had also to cope with some problems. First of all the whole club suffered from a 2-1 defeat against arch rivals Sch*lke 04 at home. And as an „icing on the cake" the blue ones where the better team and deserved those 3 points. The good news were, that left back Marcel Schmelzer and attacking midfielder Mario Götze were available. Even midfielder Ilkay Gündogan was back from injury and took place on the bench. So Jürgen Klopp switched back to a 4-2-3-1 tactic. Schmelzer, Hummels, Subotic and Piszczek made up our flat four. In front of them Bender and Kehl took their positions. Marco Reus started on the right wing, as it was expected that Michael Essien would be a vulnerable point in Real's defence. Götze started in central attacking midfield while Großkreutz was on the left wing. Top striker Robert Lewandowski was again our sole striker.

In front of an international capacity crowd of about 66.000 people both teams started eager to attack. In minute 5 Ronaldo capitalized on a mistake of Marco Reus. His pass nearly found Mesut Özil in the box. And indeed it was Real Madrid who started more aggressively and with more ball possession. Borussia needed about 10 minutes to get into the match but finally created more ball possesion on their own. The first blow for Real happened in minute 19 when Khedira had to be replaced. An injury he suffered from until last week broke up again. He was replaced by Croatian national Modric. Two minutes later left wing di Maria set a first highlight but his shot from 18 metres was wide. Borussia Dortmund found the right answer only minutes later, when Sebastian Kehl aimed for the top left corner with a fine shot. It needed a fine save by Real keeper Iker Casillas to clear that one. 36 minutes were played, when Pepe played a horrible pass directly to Sebastian Kehl. The tall holding midfielder reacted quickly and played an immediate pass, that saw Robert Lewandowski up and away. The Polish national looked cool as ice as he scored with a low shot into the right corner - 1-0 Borussia Dortmund!

And what did Real Madrid? They reacted in style! Only two minutes later Marco Reus lost the ball in midfield. Midfield genius Mesut Özil played a fantastic 40 metres pass to the left side. Borussia defence was suprised and Ronaldo stormed down the left side unmarked. BVB goalie Roman Weidenfeller left his goal in a desperate attempt to clear the ball. Ronaldo had no problem in chipping the ball over Weidenfeller's head to hit the equalizer - 1-1! Surely that was somehow a shock for Borussia and so both teams went into halftime.

There weren't any changes on any side. Borussia's players weren't shocked anymore. They now realized, that it was possible to get those points. In minute 50 Piszczek stormed down the right side. His low cut-in was destinated for Marco Reus. The German national didn't touch the ball as he saw Mario Götze storming into the box. Götze's shot from 14 metres needed another fine sve by Casillas. Only 1 minute later Marco Reus tried a dircet freekick, but again Casillas saved. During this phase Real Madrid had only minor chances like di Maria with a shot in minute 57. At all it was now Borussia Dortmund's time. In minute Götze tanked down the right wing into the box. His fine high cut-in forced Casillas to use his wrists. But his clearance was way to short. Left back Marcel Schmelzer took a powerful shot from 14 metres and really scored - 2-1 Borussia Dortmund!

Jose Mourinho reacted and replaced Benzema by Higuain. While Real Madrid now desperately tried to created chances, Borussis Dortmund had the chance to start counter attacks. In minute 77 Großkreutz wasted one of these chances. In minute 78 and 82 Götze and then Reus were brought down in Real's box. The first situation didn't really deserved a penalty at all, the second on was not that clear, as Alonso only had a minor touch on the ball. Real Madrid really pushed but at all they weren't able to created any big chances anymore. And so finally, after 94 minutes of play, referee Kassai blow he final whistle! 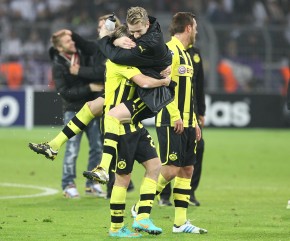 At all it was a deserved win. Borussia Dortmund did way more than Real Madrid and was even able to come back from the shock equalizer. BVB is now in a comfortable position. As Manchester City lost 1-3 in Amsterdam, the black-yellows cann really hope to survive the group stage. The next match will be in Madrid in about 2 weeks.