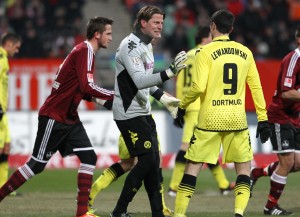 Borussia Dortmund had a solid start to the season. Winning with a hard fight 2-1 at home against Werder Bremen gave us some confidence for the rest of the season. But now it is time to get rolling. Off to Nuremberg to pile up 3 more points. But that won't be an easy task.

Let's have a short look back to last weekend. Borussia Dortmund played the season opener against Werder Bremen at home. Though we won - and besides are now undefeated for incredible 29 league matches - we really weren't that brilliant. Werder Bremen had several chances to score and in the end a draw would have been ok. Especially our defense is not yet in gear and showed some serious mistakes. In the end it was somehow like in the preparation matches. Part of the story was that right back Piszczek was injured and replaced by Oliver Kirch, who had a not so good start into the season. But also Hummels, Subotic, Schmelzer and the whole team at all had problems in defending. One of the few shining moments were Marco Reus' actions in offense and also in defense. In addition he scored the important first goal. Having in mind that Mario Götze scored when coming from the bench, that momentum could be used to beat Nuremberg this weekend.

Before going in media res let's have another look back to what else happened this week. This Thursday there was the Champions League draw. As Borussia Dortmund was seeded in pot 4 only. We expected a tough group. What we got, is more than we imagined. Real Madrid CF, Manchester City FC and Ajax Amsterdam. The reigning champions from Spain, England and The Netherlands. Really a very tough task. Having in mind that Real Madrid is packed with world class players, including German nationals Özil and Khedira, and that Manchester City is poured over by petro dollars, we will have to give it all to proceed. At least the third spot would be nice as that would mean proceeding to Euro League. The BVB supporters themselves will have 3 nice opportunities to travel through Europe.

1. FC Nürnberg won their first match 1-0 on the road against struggling Hamburger SV. Though it was a mediocre match, but at least FCN was the more agile team and deserved those 3 points. Coach Hecking won't make many chances regarding the starting line up. Striker Pekhart could slip into the team instead of Polter. Midfielder Frantz is still doubtful due to a flue, Gebhart or Mak could replace him. At all the Franconians will field a 4-2-3-1 tactic.

As mentioned BVB coach Jürgen Klopp will replace Oliver Kirch by Lukasz Piszczek on the right back position. That should give our team a more stable defense. Besides that there won't be any major chances. There is still a slight chance that Mario Götze could start in favor of Großkreutz. Kuba will surely start as right winger and new signing Marco Reus in central midfielder as another attacking option.