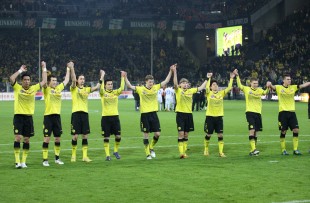 60 minutes of dominant play were enough to banish the bogey 1899 Hoffenheim, which was rumoured by the media to be Dortmunds bogey team after only two victories in the past eight matches since 2008. With 3:1 goals and Kevin Großkreutz and Shinji Kagawa as the most successful ghostbusters in this match, Borussia Dortmund continued his series of meanwhile nine matches without a defeat and strengthened its position beside the "top teams" Sch**ke 04 and Bayern Munich, which go now head to head with 40 points at the top of the championship table.

Before Jürgen Klopp could send out his squad to chase the guests from the ghost town Sinsheim back to where they came from, only small changes in the line-up had to be made. Star hunter Mario Götze, who currently still suffers from a overstressing of his pubic bone and will be missing for the next six to eight weeks was again replaced by Jacub Blaszczykowski who once again had the chance to underline his currently good shape and hunt on his right wing in the midfield. 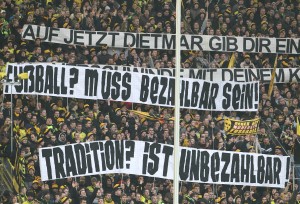 Roman Weidenfeller furthermore could return between the posts after recovering from a muscle injury in his back. Overall, Jürgen Klopp's self-confident squad after the excellent performance last week in Hamburg did not have to be afraid of the bogey team from Sinsheim, that currently clearly underperforms and is by far behind their international aspirations with barely 23 points and 19 goals in 18 matches this season. But the past have shown that Dortmund always had some trouble dealing with this financial evoked nuisance TSG Hoffenheim 1899, let's see how our squad got rid of them this time.

First half of the hunt

Dortmund began with enormous pressure against ball and opponents right after kickoff. Already in the first few minutes, Dortmund managed to get in promising positions in front of Hoffenheim's goalkeeper Tom Starke without being ultimately dangerous. In minute 5, Kuba made his first (and definitely not the last) sprint on the right wing and crossed to Lewandowski, who headed the ball in direction of Tom Starke, who avoided the early deficit with a brilliant save on the baseline. In the early phase of the game, Dortmund is superior in every department. 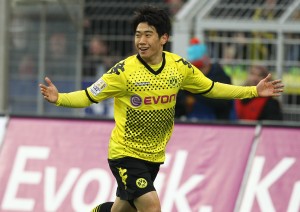 Marcel Schmelzer made a precise pass to Grosskreutz (8.), who went down to the baseline on the left wing and initiated the next dangerous situation by crossing into the box to Lewandowski, who tried to direct the ball from short distance in the bottom corner. Again Hoffenheim's goalkeeper defeated this shot at the last second. Winged by this strong start and pushed forward by the fans, Dortmund continued to pressure Hoffenheim back into their own half and thereby Hoffenheim in return had no chance to set up their offensive play, uncontrolled passes to the front ended several times with the off-site whistle. After the first third of the game, Hoffenheim slowly became more stable and Dortmund's offensive pressure slacked. More surprisingly that in minute 16, Kagawa finally scored the first goal of the match: a rather harmless pass from Starke to Hoffenheim's midfielder Rudy in the centerfield, captain Sebastian Kehl from behind let Rudy no time to control the ball and passed it right back to the front to Kagawa, who started into the box, skipped to the right around defender Vestergaard and shot the ball to 1:0 in the bottom right corner. A meanwhile overdue goal regarding the numerous chances Dortmund had so far. The squad, backed up by solid defense performance around central defender Hummels, further showed excellent offensive football and nearly each single offensive action meant unavoidable danger for keeper Tom Starke.

Bender (21.) and Kuba (24.) missed to extend the lead and the Westfalienstadion had to wait until minute 31. After a bad pass from Hoffenheim's Braafheid, Kuba once more started from the right wing into the box and put the ball back to Kagawa. Kagawa immediately with the pass back to Kuba, who was meanwhile abandoned by Hoffenheim's defenders and thereby had time for a beautifully soft cross into the six-yard box where Kevin Großkreutz had no problems to net his sixth goal in this season. With the confidence of a two-goal lead, Dortmund released some pressure and was lucky that Babel (34.) missed the goal from 8 meter distance after passing out Hummels and Subotic with a nice solo-run, but Roman Weidenfeller saved the situation for his central defenders. 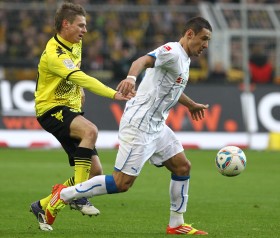 The next howler from Rudy, who definitely had a hard day of work against this Dortmund pressure, initiated the next promising chance for Dortmund: Kagawa (42.) robbed Ruby the ball during he tried to build up and passed directly to the right side of the box where Kuba was waiting to shoot, but before he could control the ball properly, Rudy was back to correct his failure. It was then again Großkreutz (44.) who let the Dortmund supporters scream after he scored out of four meter distance towards a ball into the box from Schmelzer, but the off-site whistle saved Hoffenheim a three goal deficit and sent our squad with a two goal halftime lead in the dressing room. An overall satisfying team performance so far from all parts.

Second half of the hunt

Comprehensively, Dortmund began the second half a little bit slower than the first one but still remained dominant, even if Braafheid (48.) had a good chance after a pass from Johnson, but it was not enough to overcome Weidenfeller today. Großkreutz (51.) misses the goal by a few meters after he slightly loses his balance before the shot. Hoffenheim coach Stanislawski spoke the right words to his team during the halftime. They showed more aggression in the beginning of the first half, at the same time Dortmund slightly released the pressure. But even then, the BVB still remained extremely dangerous in the offence and the two men of the match, Großkreutz and Kagawa (55.) were responsible for the next piece of football beauty: again Braafheid with a blunder, Kagawa picked up the ball, passed it into the box to Grosskreutz who made a wonderful heel-kick back to his Japanese colleague, who just had to finish the ball into the empty net. Hoffenheim then with a small sign of life: 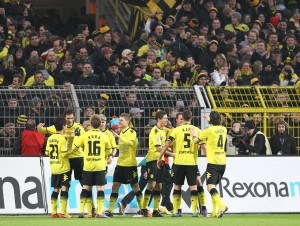 Babel's shot was saved by Weidenfeller (59.) and a header by Beck (60.) closely missed the black-yellow goal. Dortmund started to take things easy and a relaxed atmosphere on the pitch as well as on the stands occurred. Maybe a little bit too easy because Johnson (63.) profited from the fact that our defence was a bit disorientated for the first time: Braafheid with the cross into the box and Schmelzer came too late against Johnson who let Weidenfeller no chance. An unnecessary goal that gave Hoffenheim back the hope of at least one point. Fortunately, the black and yellow defence was outstanding yesterday and Hoffenheimer offence efforts were no real threat.

A free kick from Kuba (67.) missed friend and foe and spun dangerously in goal direction but missed closely the bar. On the other site Salihovic, who already scored in the first match this season against the BVB via free kick had a promising free kick position after a foul by Kagawa, but Weidenfeller saved without problems. Lewandowski with two more chances (70. + 74.) to extend the lead, but he was not lucky and found his personal bogey today reincarnated in the strong keeper Tom Starke. As Hoffenheim was simply too weak to threaten the Dortmund victory, both teams lowered their efforts. Beck (83.) with a good shot from 20-meter distance missed the goal closely and Barrios (90.), meanwhile replacement for Lewandowski, with the last chance in this match, but Starke once again remained winner today.

Thanks to Tom Starke and a few periods of missing concentration, 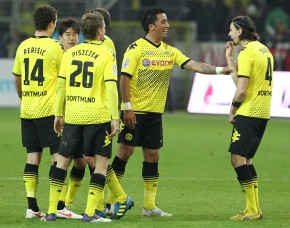 Borussia Dortmund persuasively expelled the bogey 1899 Hoffenheim out of the Westfalenstadion. Considering the course of the game, three goals seem a little bit less in relationship to the missed opportunities but at the same time, Dortmund was lucky that the weak Hoffenheimer forward line had not used the few inattentive moments in our defence properly. Nevertheless, it was an overall satisfying performance that makes us fancy for the upcoming games. With Kuba as a more than adequate substitute for Mario Götze on the right wing, a reinvigorated Shinji Kagawa and Kevin Großkreutz in great shape, Dortmund is more than prepared for the match versus 1. FC Nuremberg next friday evening, 8.30 p.m CET.