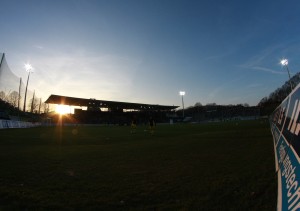 The best choice to evade the boring Bundesliga break seemed to be following the mighty BVB to Wuppertal to watch the test match against 4th division (Regionalliga) side WSV Borussia. But without 14 internationals the remaining young-guns were unable to keep up the high standards they have set this magnificent season and even got sent home with a 1:0 defeat.

The most anticipated part of this wee journey (apart from the match, of course) came after reaching the all-but-beautiful Wuppertal main station. From there to the stadium it is best to travel by the historic overhead railway, which was built in 1901 but is still in regular service. Quite unique and a fantastic unhurried ride.
The old but halfway modernised Stadion am Zoo was filled with more than 8.000 fans and some more watched the game outside from the hillside opposite the main stand. With perfect weather for the beautiful game, everything was set for an entertaining evening.

Jürgen Klopp had only Roman Weidenfeller and Kevin Großkreutz from the usual starting 11 on board. Kevin was facing his cousin Marcel who had left Dortmund for Wuppertal at the start of this season. The rest of the BVB team consisted of bench players like Santana, da Silva or Dede and some youngsters that usually get to play for the U23 reserve. Once again missing was skip Sebastian Kehl, but where Dortmund’s papers wrote of back problems, Klopp stated after the match, that it was planned that Kehl would do some intense training during the game break. I guess he will be super-fit once the season is over. 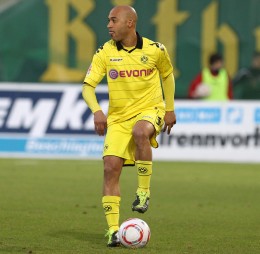 The game started very slowly. Wuppertal had a lot of respect at the beginning and hardly ever crossed the centre line. On the other side the few promising BVB attacks were mostly stopped by fouls. The first real scoring opportunity for the only true Borussia was missed by youngster Marco Stiepermann, who tried to outsmart ex-BVB II goalie Sascha Samulewicz with a lob from the centre circle but missed by a few feet. After 20 minutes Toni da Silva curled a free kick from just outside the box past the Wuppertal wall but Samulewicz could get one fist on it and cleared on the cost of a corner. That was taken by phantom Feulner and landed again on da Silva’s foot. He almost sneaked it into the near corner but missed by inches.
That was it from Borussia Dortmund in half 1. Wuppertal fired only one real shot at Weidenfeller but that posed no problem for the experienced glovesman.

Had the first half been boring, started the 2nd one even worse. Klopp gave some more youngsters the time to shine and Wuppertal seemed even more harmless than before. The first time the pulse went up, was when U23 goalgetter Daniel Ginczek, who had just recovered from a knee injury, got hurt once more and had to leave the pitch. Klopp stated later, that he was not severely injured and should not be missing for long. Let’s hope for the best as he is the only proper central striker our reserve has at the moment.

When half the crowd was dozing off, the spectators outside the ground started an optical highlight with lots of fireworks. Always an atmospheric sight. Maybe this spectacle affected the concentration of Owomoyela and Santana who showed a classic slapstick maneuver on the right wing and ran each other over. That left a wide gap for WSV skip Moosmayer of which he made good use. He penetrated the BVB-box and passed the ball to the unmarked Pagano, who could easily get it past young goalie Alomerovic. “Shit happens” was Owomoyela’s fitting comment on that scene. 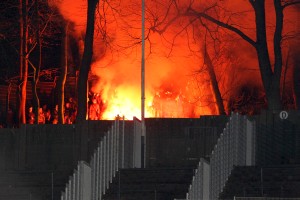 BVB tried to force the attack more, but could prepare only few scoring opportunities. So everybody was happy when the final whistle was blown. The Wuppertal fans because they had beaten the Bundesliga frontrunners and the neutral spectator and the BVB supporters simply because it was finally over. I should think of something better to do during the next Bundesliga break than watch test matches. I’m open for suggestions…

The best BVB player on the pitch was without a doubt Dede who could show some of his famous sliding tackles and was also very present in the BVB offence, but could never find a recipient for his sharp crosses. 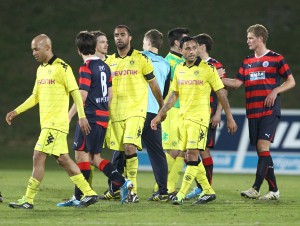