The Week of Truth ? Chapter Two: Surviving the Gunfire 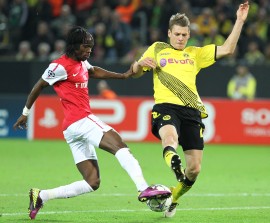 Mission one completed. A tactical master stroke let Borussia Dortmund carry off three points from the Bavarian provincial capital. Still two-thirds to go and the upcoming task on Wednesday evening will not be much easier. No one else then Arsenal FC is the next challenger of the young team from Dortmund. It is not exaggerated to say, that the match has the importance of an first final. The Gunners are on top of the group with eight points, closely followed by Olympique Marseille with seven points. Borussia Dortmund – on rank three with four points – is forced to win for still having a chance to reach the knockout phase.

On the last matchday of the Premier League the enormous quality of the Gunners was visible. Although Arsenal went behind due to a goal by Morison, Dutchman Robin van Persie turned the match against Norwich City around with a brace. An offense with players like the Netherlander, Theo Walcott, Mikel Arteta and Gervinho should certainly not be underestimated. Furthermore the 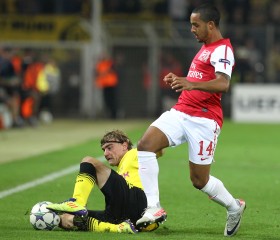 circumstance that Arsene Wenger allowed himself to let highly talented players like ex-Borussian Tomas Rosicky, Andrey Arshavin and Marouane Chamack simmer on the bench proves how qualitative the squad of the Gunners is. After twelve matchdays Arsenal ranks on place seven with 22 points. A position in the league that surely does not satisfy the responsible persons. Through the transfers of Samir Nasri and Cesc Fabregas a loss of substance is present. The integration of the new players takes place rather slowly. Especially German Per Mertesacker is an instability factor that offers opportunities for our offense around whirlwind Mario Goetze. Mertesacker acted weak during the first leg and also committed a blunder against Norwich City that immediately led to the lead for Norwich. At the moment he has got a bad press in Great Britain. His coach Arsene Wenger defends Mertesacker: "These bad words are harsh and unjustified. He is an intelligent guy and gets better from match to match." Nevertheless the young guns will be well-advised not to walk right into a trap but surely will get their goalscoring opportunities. 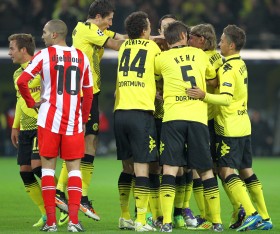 As mentioned several times before, our Black and Yellows acted way to naive during the first Champions-League matches. But during the home match against Olympiakos Piraeus it seemed like the lads flipped the switch. Also against Bayern Munich the defensive tactics worked out perfectly and gave the Bavarians no chance. Once more the new formated defense around Mats Hummels and Brazilian Felipe Santana will be in the spotlight on Wednesday evening. International Robin van Persie will be a hard task to accomplish. Above all the Borussia from Dortmund should concentrate on its own defense and use counter-attacks to reach the box of Arsenal London. From where we stand only long-term casualties Neven Subotic and Julian Koch are not able to start on a journey to London. Coach Juergen Klopp can draw on unlimited resources. It is necessary to lead off the fight and to plough up the whole pitch if it comes to the worth. Borussia Dortmund can reckon on more than 7,000 supporters that are following their team to the Emirates Stadium. Even though the restrictions for the away supporters looks like running gauntlet compared to the relaxed atmosphere around and within a German stadium. Arsenal London prohibits standing as well as the wearing of Black and Yellow colors, it will be interesting to see how these restrictions will be pushed through. When in Rome, do as the Romans do!

Got to catch a train now. Next stop: London.