Week of Truth - A first Survey 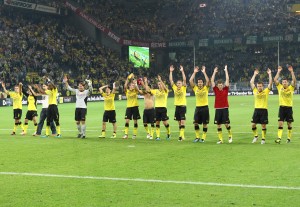 Due to the upcoming week of truth, in which Borussia Dortmund is going to face Bayern Munich, Arsenal London and FC Scheisse 03+1, we would like to give you an overview of the first third of season 2011/2012. How can the performances of our team be rated so far? Step by step I am going through the three competitions and will furthermore try to give an outlook onto the future. Before the imminent very important matches, the injury list of our squad distinctly shrinked. Compared to the start of the season, key players like Paraguayan Lucas Barrios or Japanese Shinji Kagawa have recovered and players that searched their form at the beginning of the season now seem to get back on their feet. Kevin Großkreutz can be cited as such an example.

Nevertheless the injury of Serbian Neven Subotic, who had a meeting with the elbow of Kyrgiakos, raises questions. How will the new formated central defence with Mats Hummels and Felipe Santana do? Are they able to stop Mario Gomez, Thomas Mueller, Robin van Persie and Raúl? Also youngster Julian Koch should not be forgotten. The 21-year-old full-back still suffers from a severe knee injury – his return can be expected around March 2012. Apart from the two long-term casualties, defender Marcel Schmelzer is afflicted with a strain of his calf muscle. But according to our team doctors there is an existing chance that he will travel to Munich as well as the other players. 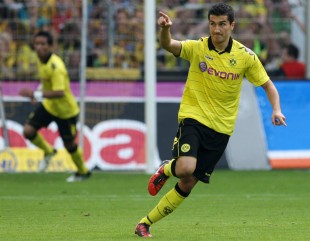 Seven points out of the first six matches. Rank 11. A disillusioning result for an current German champion. At the beginning of the season a fear of failure was present around the Strobelallee. Could it be possible that the team was exhausted? Or even worser: Could it be possible that the team acted over its performance level during the last season? Fortunately both questions have already been denied. The team struggled with the loss of playmaker Nuri Sahin. The shown performances made clear, that the missing playmaking abilities of the young Turkish international had to be spread on many shoulders. The style of play was way to uncreative and stiff. Finally the low point was reached during the home match against Hertha BSC Berlin, that even brought back in mind the horrible performances under coach Thomas Doll a few years ago. The mentioned lack of creativity manifested in frequent mixtures of the defensive midfield. Sebastian Kehl, Sven Bender and the until now unfortunate acting Ilkay Guendogan had the chance to show their skills. By now it seems like even 18-year-old Moritz Leitner has overtaken Guendogan. But it was also the uprising of Polish striker Robert Lewandowski. During the absence of Lucas Barrios he took not less than ten steps forward. He still leaves out high-quality scoring opportunities but in contrast to last season, he is way much better integrated into our attacks. As an outcome of this, he has already overcome his performance characteristics of last season with eight goals and five assists. 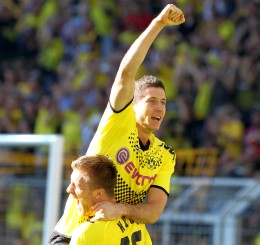 With the last-minute win over Mainz through a curios goal by Lukasz Piszczek, Borussia Dortmund turned things around. Out of the next six clashes with Augsburg, Bremen, Cologne, Stuttgart and Wolfsburg followed 13 points that lifted the Black and Yellows up on rank 2. 17-2 goals are proof that the defense, as well as the offense, have found their balance back. With 23 points out of 12 matches Borussia moves towards 30 points out of the first half of the season, a circumstance that has become regular since Juergen Klopp arrived Dortmund and also heightens the chance to qualify for an international competition at the end of the season. Needless to say, the upcoming away match against Munich is going to be a really really tough one. Skipper Sebastian Kehl also determines the team from Munich as clear favorites but adds: "Last season we proved that we are able to defeat them if we have a good day."

I do not want to steal all the material for my fellow who is going to write the Warm Up report on Munich in detail, and that is why I am having a break at this point of the text. After the match on Saturday evening we will get to know whether Borussia Dortmund is a serious opponent for Bayern Munich in the fight for German championship or if Black and Yellow has to be satisfied with the fight for rank 2. Still one thing remains to be said: Even if Borussia Dortmund will be lose against the Bavarians, our club and the squad is in a good shape and on a promising way to the qualification for an international competition. 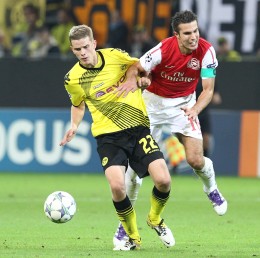 Conclusion: Until now the Champions-League is a real masterclass but the squad is going ahead. In the home match against Arsenal London, Borussia showed a promising first half and technically had to be in lead with two goals. But things turn never the way out you expect. After a bad mistake by Sebastian Kehl, it was an easy job for Robin van Persie to put the Gunners in front. Too bad. What followed next is already history: Perisic, BOOM! In contrast the away matches in Marseille and Piraeus were disastrous. The young squad acted way to blue-eyed and was punished immediately. But then a flicker of hope rushed through the Westfalenstadion during the match against Piraeus. Instead of steady offense and walking right into a trap, the young guns lead off the fight and proved their eligibility in the Champions-League. But to be honest: Achieving the knockout phase has already become unrealistic due to the fact that we have to win our away match in London, as well as the home match against Olympique Marseille. Despite the low chance that is still left, the trip to London offers the chance to become just as legendary as the trip to Paris last season when nearly 10,000 Borussians visited the French capital. The outcome of the group stage: unclear. All or None.

Instead of the last years, our team was able to reach the round of the last 16. In the first round Borussia defeated SV Sandhausen with 3-0 and was also successful against Dynamo Dresden (2-0) a few weeks later. Even though the players acted quite reserved, the wins were not endangered. The next opponent is going to be Fortuna Duesseldorf, the current high flyer of the second German division. Under normal circumstances - no penalty shootout! - we should be able to reach the quarterfinal.

So much for that and enjoy the upcoming week of truth!