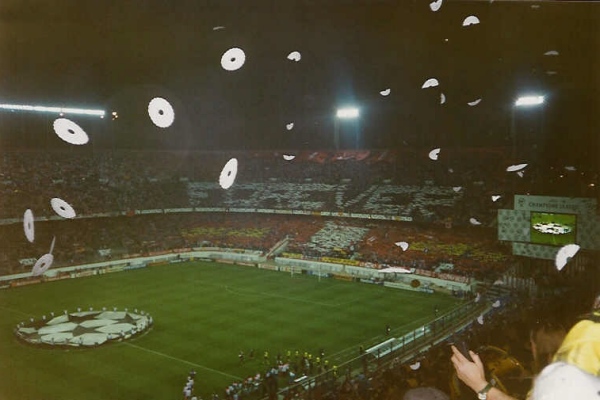 A thrill of anticipation runs through every Black and Yellow supporter after this stunning season that culminated in the win of the 7th championship. After years of abstinence our young guns managed to qualify for the UEFA Champions-League. It has been six years since Borussia Dortmund was on the brink and each of us suffered from not knowing if our future was with or without our love. For years we were thirsty for competing with the best European football teams. The Europa-League excursion of last season could only satisfy our thirst short-time. The team and the supporters wanted more! But not only the team and supporters profit from the European tour. Also the club profits from the payout of the Champions-League that will be used for debt repayment. To encourage the anticipation of the CL season and the upcoming important match against Arsenal London, I will today make an historic excursion back to the years 1996 and 1997 and regard the successful Champions-League season that is now more than ten years ago. 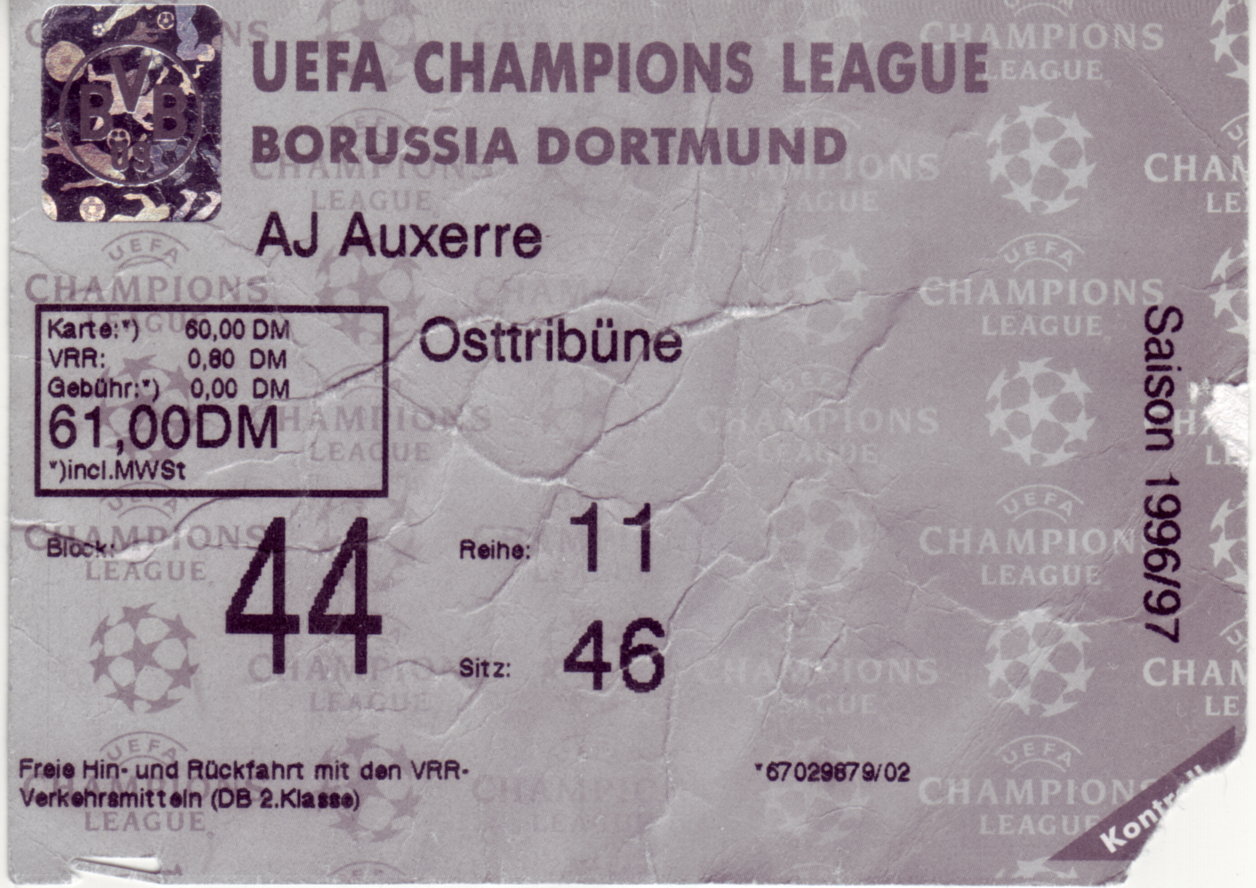 It was an advantage that the CL-season of 1996/1997 only included the 16 top teams of Europe – a great difference compared to nowadays. But when Borussia started in the group stage with the concurrents Widzew Lodz, Steaua Bucharest and Athletico Madrid no one would have ever believed that the journey would take mighty Borussia to this one magic evening in Munich 1997.

Borussia Dortmund started the season with a home match against Widzew Lodz (2-1) that was decided by striker Heiko Herrlich who scored twice. The two upcoming away matches against Bucharest and Madrid were also won. Youngster Lars Ricken, Joerg Heinrich and Swiss Stephane Chapuisat made it 3-0 in Romania. The close clash between Borussia and Athletico was decided by a goal of Stefan Reuter in minute 51. After the first three matches the way towards knockout phase was already paved. In the return matches our beloved team changed down a gear. Athletico Madrid stole the points from Westfalenstadion due to a 2-1 win. Furthermore Borussia was only able to draw with Lodz (2-2). The last home match against Bucharest was won with a 5-3. 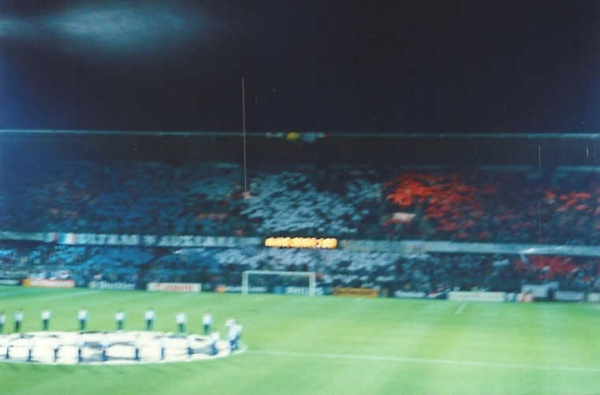 The opponent in the quarterfinal was the French champion AJ Auxerre. I would like to entrust you to the report I wrote down last year because of our special Schwatzgelb.com Advent calendar. This is how I experienced the first leg against the French:

„The year is 1997 and historians will later on mark this year as one of the most glorious in Borussia Dortmund's history. So what I am going to try to present you for todays Advent calendar door is my first visit to Dortmund. I do not quite know how and why I became a supporter of Borussia Dortmund but when I asked my mother about the reasons, she just answered: „You were always a Black and Yellow“. So you can probably imagine which thrill of anticipation spread through my veines when my mother told me at the first quarter of the year that we would be visiting a match of my beloved Borussia soon. I remember how excited I was the day before and how I composed my well-kept Borussia clothes. My parents chose the Uefa Champions-League home match against the French from Auxerre, needless to say: It was the first match of the quarterfinal! So we went to Dortmund by car and had even time to visit the inner-city. We must have been somewhere around the Friedensplatz. In my defense: I was a little boy of only eight years. 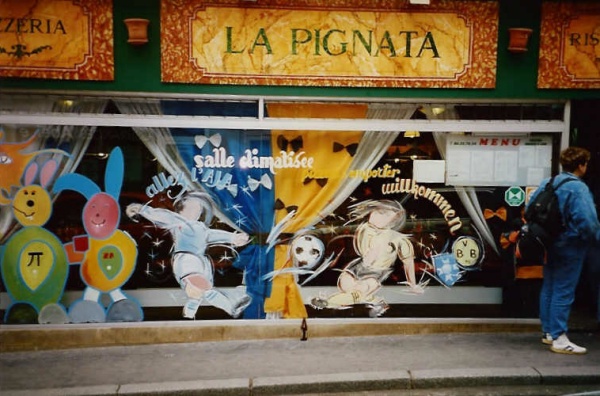 Borussia finished the group stage with the second place and left Widzew Lodz and Steaua Bucharest behind. By this time only 16 teams reached the knockout phase and so it began with the quarterfinals. But back to me. When I entered the Westfalenstadion I was totally astonished, I knew that the stadium would be giant, but as an eight-year-old the impressions were overwhelming. My parents and me must have been sat somewhere on the right side of the Westtribuene, than that is what will stuck in my mind forever: On the right-hand side this gourgeous mass of Black and Yellow people and on the left some Frenchman. The course of the game can be explained very quick, Borussia won with 3-1. The hero of my youth Karl-Heinz Riedle scored the first goal that I saw within the Westfalenstadion. Jörg Heinrich played a cross from the left and „Chappi“ Chapuisat served „Air Riedle“ with an overhead kick and the famous striker finished with a header. What a 1-0! The other goals were scored by Schneider and Andreas Moeller.

One anecdote must be told, as far as I remember the seats had the quirk to swing in everytime you stood up. Because of the fact that we scored three times I certainly jumped up for three times (or even much more). My mother feared that I could fell of the tribune and so she advised me everytime to sit still. When Moeller scored the third goal I jumped up again and scratched my back on the swung in seat while I was trying to sit down again. My mother gave me a good thrashing within the stadium. So at this point I would like to say thank you to my mum for exposing me in front of the whole Westtribuene. Last but not least: Thanks mum for cementing my Black and Yellow love and thank you to the old man who sat next to me for comforting me with some yellow candy!“

The return leg in France was once more decided by Lars Ricken who scored in minute 61. Semifinal here we come! 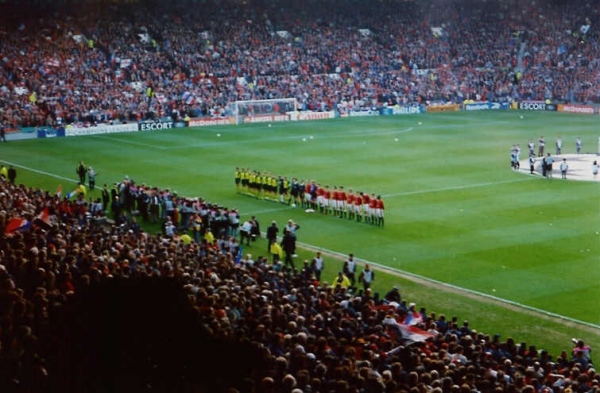 A true thrill! No one else as English legend Manchester United was going to be the next opponent of Borussia Dortmund. Popular players like Eric Cantona, Ryan Giggs, Peter Schmeichel, David Beckham or Solskjaer belonged to the team from Manchester. In the home match, needless to say that it was really close, Borussia Dortmund defeated United 1-0. The hero of the day was René Tretschok who scored in minute 76 after an assist by Paulo Sousa. What followed in the return leg has already become a myth. After Borussian Lars Ricken scored the 1-0 in Old Trafford in minute 8, a tough defensive battle started. The main character of this evening: Defender Juergen Kohler who fought like it was a matter of life and death became hero of the evening: Although lying on the ground he blocked a shot from Eric Cantona in minute 17. With luck and a great fighting spirit underdog Borussia Dortmund made it to the finals.

Regarding the final I would like to let my fellow Henry speak who already published an article on the evening in Munich a few weeks ago. It sums up the evening perfectly and conveys a sense of how the supporters of Borussia Dortmund felt after the match. You can find the article here!