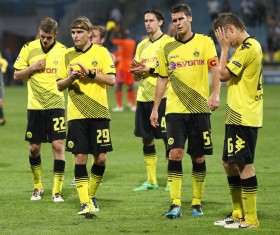 Love hurts. Similar to the daily life, the life of a supporter consists of ups and downs. So a loss in Piraeus, that is tantamount to the elimination, can knock you down even like an ex-girlfriend. But what is love all about? We celebrated with our team through the last half year and had a wonderful time together. We adored our young guns and felt like nothing could ever stop us. But this time is gone. With ongoing relationship it gets routine and nobody recognizes the small things that made them happy years ago. A win against the promoter from Augsburg? Whistles during several passages of the home match. A though fight in Bremen? „It's luck!“ someone said. What happened that made people be so inconstant? Did the partner change? Did expectations change? To put it simply: Something of both. With the loss of playmaker Nuri Sahin and improved defences of our opponents, the style of play changed. The football that carried us through the last year was unique. Even if it is hard, this fact is what one has to keep in mind while having a relationship with Borussia Dortmund. Too much supporters dream of older and glamorous days. A shaky base for a relationship! 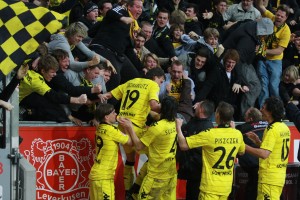 You probably wonder why this guy bends your ears and uses these corny comparisons. To tell the truth, even I was hardly disappointed by the team on Wednesday evening. But after long thinking about the situation of Borussia Dortmund and myself, I came to the point, that the newly low blow against the indebted Greeks could also mark a new starting point. Everyone should reflect. Together we will make it. Love hurts.

With the 1. FC Köln a team visits Dortmund that has already shown light and dark through the season. They managed to defeat their arch enemy Bayer Leverkusen whereas Cologne was not able to gain points in their away match in Berlin. After the fortunate win over Hannover 96 last weekend, the „billygoats“ climbed up on the 10th position and are close behind Borussia with 13 points. Lukas Podolski is the key element of the team from the city next to the Rhine. It seems like he has braced himself and links to his old level of performance. After nine matches he already scored six times and assisted four times. But coach Stale Solbakken and his team have to deal with several injuries. Especially the defense is struck: Petit, Geromel, Brecko and Andrezinho are out of action. The defense of Cologne is going to be scrateched – a possible weak point.

After the horrible defeat on Wednesday Juergen Klopp must be really busy to rebuild the team and to encourage his players. Sven „Manni“ Bender stated after the match: „Mistakes that we make [in the Champions-League] are much harder punished as in the Bundesliga.“ Our central defence around Mats Hummels and Neven Subotic has to pull themselves together and our defensive midfield has to prove its qualities. It would be great to see how Moritz Leitner would handle a start from the beginning – on Wednesday he was a vitalization for Borussias style of play.

Nevertheless the 1. FC Köln should not be underestimated and it is hard to calculate how the match is going to end up. Supporters and team should close ranks and sort out the mess again. Honestly, who cares about the Champions-League?