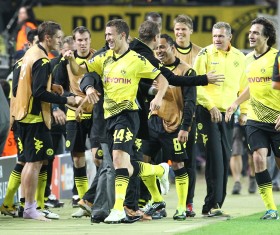 Tuesday afternoon. I make my way to Dortmund city by underground, some fans are dressed in black and yellow, but not many people are on the streets at around four o'clock. When I get nearer to my destination old market, something like atmosphere comes up. I hear chants. Not the chants I used to know, English chants. When I went around the corner, I saw at the first glance where the chants are coming from. People dressed in red and white, chanting English songs. Arsenal supporters. Yes, Borussia is finally back in the biggest European competition there is today. Borussia is finally back in the Champions League. After nine long years, I will hear the Champions League hymn in Westfalenstadion again. From this point on, I knew that it will be a great day in Dortmund even though I did not knew that I will go home from the match with a big smile.

At our international fan meeting, we had a great time with some supporters of Arsenal FC, talked about football, about similar periods with hard times, had some beers and marched forward to Westfalenstadion. At the old market, one could gain the impression that it will be an interesting evening in our ground concerning the atmosphere since the supporters seemed to be in a good mood with many chants – almost one chant for each player – singing aloud and our little group of fans had no chance to chant them to the ground. However, that changed completely in Westfalenstadion. But let's do it step by step. 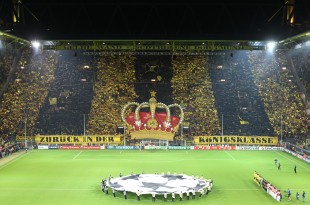 t had been long nine years since Borussia started in Champions League competition the last time. Nine long years of desperation, fear and uncertainties about the future. Nearly trembled to death, Borussia rose like a phoenix over the last years and with the championship season pathed the way to Europe even sooner than one could expect. So everyone was so excited about the upcoming match against Arsenal, but some were anxious to see the team that got beaten by newbie Hertha BSC Berlin on Saturday. One could be pretty sure that a similar performance would lead to a beating against the multiple time English champion. However, Mario Götze was back in the team and replaced Kuba who did not impressed on the pitch on Saturday. Additionally, Klopp decided to bring some experience into the match when Sebastian Kehl took the place of Ilkay Gündogan in the defensive midfield alongside Sven Bender. Arsenal arrived in Dortmund with German Per Mertesacker but without former Borussian Tomas Rosicky who missed with an injury as well as Wilshere, Ramsey, Vermaelen, Diaby und Squillaci. However, the 4-2-3-1 of Arsenal was still an impressive line-up since names like Robin Van Persie, Theo Walcott or Yossi Benayoun are well-known in Europe.
Before the match started, the Südtribüne presented great choreo with a big crown and the words "back in Champions class", the whole terrace was covered with black and yellow papers. Then, the Champions League hymn can be heard and I felt goose bumps because for every supporter of Borussia Dortmund, that hymn means so much because it is a sign that BVB is finally back. Nobody would have thought about that some five or six years ago. Just incredible. 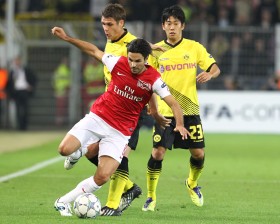 From the first minute onwards, the Südtribüne presented itself in the best shape. An appeal to the whole seaters to stand up was accepted by the full stadium and thus, everyone of the 65.000 fans in Westfalenstadion was standing, chanting for Borussia, clapping the hands to help this young team overcoming a possible nervousness. Several times throughout the game I thought to myself that it's been a while since I heard the Westfalenstadion exploding like that.
And the match took no starting time. After five minutes, Gervinho somehow appeared in front of Roman Weidenfeller but was irritated by Mats Hummels who had an impressive performance on Tuesday and Gervinho's shot was saved by Weidenfeller. In the direct counter attack, Borussia had the first chance when Großkreutz missed the goal from the left side after a nice combination over Kagawa and Lewandowski. Three minutes later, a long pass by Hummels made his way over the whole defense of AFC and found Kagawa who had time and place but his hasty conclusion of this attack went some meters above the goal. However, a Kagawa with the form of last season would have scored in that 09. minute. Dortmund was in control of the match and the mighty opponent, a pass by Götze found Lewandowski who was through the defense and actually did nothing wrong. He rounded his National colleague Szczesny, goalie of AFC, and just had to put the ball into the net. However, Sagna was there and got the ball away from the goal line (12th). The BVB was not to be recognized in comparison to Saturday. That was the BVB who won the championship last season, that was the BVB who dominated Hamburg on day 1 of this year's season, that was the BVB who made it's way to the Champions League, that was the BVB that every opponent was afraid of. The next counter attack over Götze and Großkreutz was concluded by the latter with a nice shot which slightly went above the goal again (18th). However, you always had the feeling that Arsenal could be dangerous with a long ball such as the one which found Robin Van Persie whose shot was saved by Weidenfeller (33rd). When everyone was happy with a goalless draw shortly before the break, one single mistake was punished severely. Skipper Kehl lacks game practice and a bad pass brought Arsenal into possession, a great pass found Van Persie and he left no chance for Roman Weidenfeller. The undeserved lead for Arsenal so close to halftime. Thus, for the first time ever, you could see something like emotion on the terrace where the AFC supporters found place. Throughout the game, they were not to be heard or to be seen, no hands up in the air, no chants like they were sung some hours before at the old marked. "You only sing when you're winning" never fitted better. All in all, it was a very disappointing performance of the Arsenal fans in Westfalenstadion. 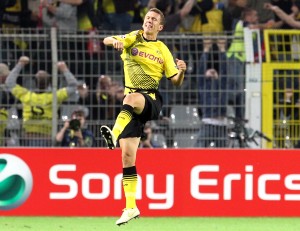 The first opportunity after the break belonged to Arsenal when Gervinho appeared in front of Weidenfeller just like in the first half, was irritated by Subotic and Piszczek, somehow brought the ball directed to the goal, but Weidenfeller was there again to save the opportunity (61st). 20 minutes before the end of the match, Klopp brought Kuba and Perisic for Großkreutz and Kehl – offensive players were needed and I had much hope in Perisic who impressed me over the last matches in which he was brought in. In these matches, he did not need much time to get into the match, always had chances to score but was very unlucky – but Thank God, this time was different. Some minutes after, the Polish connection on the right side combined when Kuba sent Piszczek on his way, but his cross found no one to capitalize from it in the middle. In minute 81, Borussia nearly equalized when a corner kick by Götze brought the ball in front of the feet of Neven Subotic, whose shot nearly went through the legs of Szczesny but the goalie somehow saved it. Seconds afterwards, Götze could not hit the ball at the edge of the penalty area as he would have like to. The young talent of Borussia had a great performance though. Borussia fought with passion for every ball and finally, they were rewarded for their performance. Once again, the whole stadium was behind Borussia, everyone was willing to support the team for their great efforts, the whole Westfalenstadion was on their feet and finally, the whole Westfalenstadion supported Ivan Perisic to score in minute 88. A free kick by Schmelzer was brought out of the penalty area, Perisic decided to hit the ball with a drop kick and the dream goal equalized. What a shot, how deserved was that? The temple explodes even more, the atmosphere is magic in that moment. Lewandowski even had two opportunities to gain the lead, but Szczesny saved the draw for Arsenal. 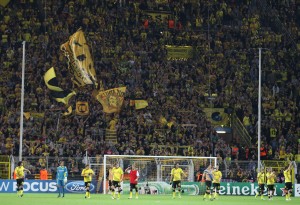 Thank you Borussia! For an evening I will never forget. Not only the first match in Champions League for nine years, but also my first Champions League match in the Westfalenstadion ever. And what a game it was. More than on a level with Arsenal London, in the end with a draw which feels like victory. Thanks to everyone in the stadium who participated in the chants, everyone of you is partly responsible for the equalizer. After that match, everyone should fear the atmosphere of an exploding Westfalenstadion, arguably the best stadium in the world. To get an expression about the atmo, have a look at the videos below.

Subs: Kuba and Perisic for Kehl and Großkreutz (69th), Zidan for Kagawa (85th)