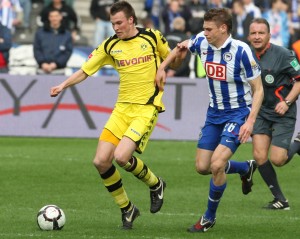 Hertha is back! And for the first time in a long time they have the city backing them. With an average attendance of over 46.000 Berlin set new standards for the 2. Bundesliga last season. But now they are back and will be facing the Young Guns tomorrow afternoon. The Spreesiders had a solid start but have never really been seen as a team that has just been promoted.

Their relegation back in 2010 finally paved the way for a new beginning. Slowly they got rid of the Hoeneß (the younger brother! the sad guy!) leftovers, who had by then already moved on to Wolfsburg. His mission to destroy Wolfsburg failed, he was replaced by Sir Felix Magath, the Facebook madman on a mission. Back to Berlin: After Berlin won promotion under Markus Babbel the old lady Hertha did not start dreaming. They are looking for a finish above the relegation line, something that could as well happen with Augsburg already doomed they only have to be above two other teams. Only the Yellow Press has already started an arrogance war headlining: “Babbel, halt den Sabbel!” (Babbel, keep your mouth shut!) after the former Bayern player had raised his voice against the Berlin arrogance. “It is not about winning titles”, he claimed and continued “it is about staying in the league”. 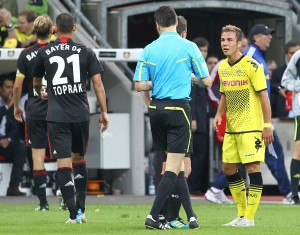 Berlin started their campaign with two draws away to Hamburg (2-2) and Hannover (1-1) and one win (1-0 vs Stuttgart) and one loss (0-1 vs Nürnberg) at home. They have not lost a single away game in 2011 but are facing a Borussia, that has not lost a home game in more than a year now and was only beaten once in the last 19 outings at home against Berlin. This season has seen the Young Guns change their style of play a bit. With only 5 goals scored in 4 matches the goal machine is not back in business just now. However all of them goals were scored in the Westfalenstadion. After the 3-1 opener against disastrous Hamburg which was widely regarded as match day 35 of the 2010/2011 season Borussia lost a bit of freshness. Hoppgate was followed by a hard fought 2-0 against Nürnberg. A fortnight ago the Young Guns and Leverkusen played against Ref Wolfgang Stark and were held to a 0-0 draw with two red cards (for Kadlec and Götze) and an assistant ref on the sidelines arguing with skip Kehl, which in the end got Kehl banned for two matches. 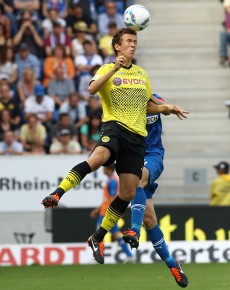 It is going to be a vital match to renew self-confidence before our Champions League comeback on Tuesday. But Arsenal now is still far away, Bundesliga has to come first and it has to be played without wonderboy Mario Götze for the next two matches. This could lead to a chance for in-form Kuba. The Polish International even scored from the spot against Germany, after setting up Polands first goal which was neatly netted by Robert Lewandowski. Other possible options are Moritz Leitner or Ivan Perisic. The Croat left some marks as a sub over the past few weeks but was several times denied by the goal post. With Kagawa currently out of form and traveling between Europe and Asia for the last couple of weeks, we might as well see some more swaps before the CL match. Tomorrow never knows? It surely does. Borussia vs Hertha. A match to look forward to! Let’s see where we currently are.

Berlin are looking for their 1.500 goal against. Let's make it quick for them!

Follow our live ticker brought to you by Angry Web: