Finally the dull weekends are over 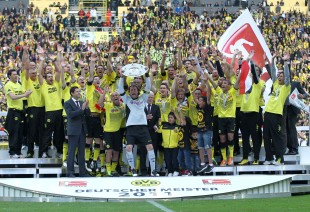 Looking back on the past three months, I start to question what exactly I did with my time on the weekend. The empty and grey Saturday (and Sunday) afternoons are finally over again. No more staying in bed for ages because there is no game to attend, no more clinging on to the tiniest bits of football news in order to bridge the vast gap of the summerbreak. No, at last, something to look forward to again. The Bundesliga goes into the next round and our Borussia from Dortmund, Championship winner of the season 2010/11 (I still love the sound of it), will open the the 49th Bundesligaseason against Hamburg on Friday, the 5th of August.
The pairing of the first game of the weekend actually sounds like a promising game and has been a wish of many people in advance. And our opponent is not an unfamiliar one. During the overly exciting Liga Total Cup, Hamburg was our final opponent, which got sent home with a defeat straight away. Of course, what else could you expect, right? And while we know that you cannot compare 60 minute long game, where the two teams pretty much tried out every player on every position, to a Bundesliga game, there was a small hint on what this game might be like. After all it sparkled a bit of a thrill of anticipation. 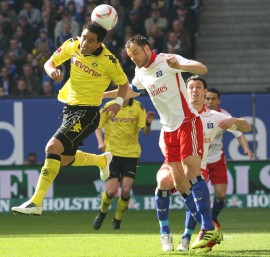 Previous to the game there has been a lot going on, as usual before a game. The new Championsleague jersy has been revealed, opinions disperse from one to another, then the not so happy news about Barrios' injury, discussions whether Kehl or Bender will take on the position of the lower midfield and today, the news about Kagawa and various other players being nominated for the test games of their national teams. A lot going on before the season prelude on friday. But thank God, when the game comes, all we care about is that our 11 players on the pitch, whoever they will be, and us fans will give it all, the rest is just a lot of talk.
Referee of the game will be an old familiar person from last season that we all remember too well. Dr. Felix Brych (36) will ring the whistle as he has done before in the games against Hannover (4:0) and the unfortunate draws against Stuttgart and Mainz. Let's hope he has a better understanding of fair and unfair at this game. And our opponent from Hamburg? Difficult to say what to expect from that team. After a lot of turmoil during the last season, Hamburgs seems to have started cleaning up. Their coach Oenning is still present in the team (despite a lot of speculations at the end of last seasons) and a lot of oldies sucfh as Ze Roberto have left the team. Still, Hamburg does not appear to be the most stable team at the moment and so their loss against Valencia in a testgame a couple of days ago, can be seen as characteristic for a team that has not quite found themselves yet. Nevertheless, Hamburg is a team that should never be underestimated, which leads to the fact that all of our players will have to be highly concentrated and do what they have done so well during the last season. Fight and run. 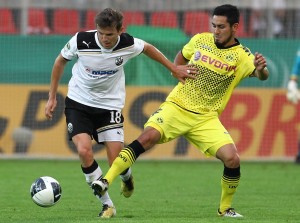 My dear fellow Borussia Dortmund fans, I can hardly express how incredibly happy and looking forward to another great season of Borussia Dortmund I am, we all are, and we surely hope that we will see a lot of you in and around Dortmund again. As for now, let's keep our fingers crossed for a great game and a victory for us! Ladies and Gentlemen, the curtain rises!