We prefer to keep things exciting 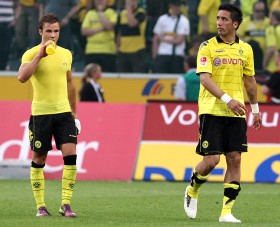 Well, what a day that was the 23. of April. A lot has been said and asked before. From "I would prefer to win the Championship on day XY" to "where are we going after the game in order to celebrate" and much more. Somehow everyone expected Leverkusen to fail one more time, whilst Dortmund would, of course, win easily against the descent endangered team from Gladbach. Not so. If you are that certain of one thing, it mostly never happens. Even though Hoffenheim managed to score the 0:1 in Leverkusen, the end result of the game would later be 2:1 for Leverkusen. With that in mind, everyone burried their championship dreams for at least that day. Yet, there was another game ahead of us. A game way more important than the one that had just passed. It was our own game against a team, well, let's say we despise quite a bit. After the 23. of April we would actually despise them just a little bit more than we already did.

Due to Sahins injury (get well soon lad, we miss you), da Silva stepped in on the position of the lower midfield next to Bender. Since Barrios was not up to 100 percent, Lewandowski took over the position of the striker once more. Barrios took a seat on the bench instead. With perfect football weather and around 20 000 fans in the back (numbers varied from 18 000 to 25 000), the circumstances were perfect for a duel between the false Borussia and the right Borussia. 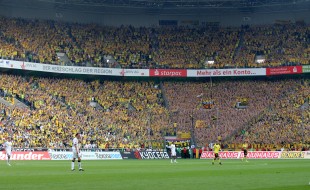 The game had barely started when our youngster Götze headed the ball slightly above the goal after only 30 seconds of the game. That's a start the way we like it. More of that please. But those thoughts were not to be heard. Somehow they turned into pleas, that once more turned into frustration. Something was wrong. The game did not develope the way we had hoped it to do. Around ten minutes later it was again Götze who shot on the goal from the left side of the goal, but Gladbachs keeper ter Stegen had a good day, so, no news on the goal front. With that said (from my side) and done (from Dortmunds side) it was time for a half hour to forget. Suddenly Dortmund lacked everything they tend to do and consist of. Pass-game? Non existent, well, kinda existent but somehow the ball always landed in front of a foot of a Gladbach player. Controlled and calm game? Nope. Not today, nervousness and anxiety seemed to be the mottos of this game.

All the cleverness, the effortlessness that our games always seemed to consist of- gone. Instead, mistake after mistake, from players, you didn't even know they could actually make mistakes. Subotic, Hummels, our strong defense that usually stands like a wall in front of Weidenfellers goal, well, they seemed to be asleep, or somehow lost, but most certainly not concentrated on this day.
Gladbach on the other hand appeared eager. They knew it was all or nothing in this game. If they somehow wanted to achieve position number 16 in the table, they had to give their all. And they did. After a great cross by Arango, (ex Dortmund boy) Reus got the ball and, luckily for us, didn't succeed to the fullest. The ball went past the goalpost, Weidenfeller had no chance. Only three minutes later it was our time to get up from our seats (if you weren't already standing) and look closely. Lewandowski tried to lift the ball over ter Stegen and succeded. Unfortunately the ball was scratched from the goal line last minute. What followed was an example from the football schoolbook, chapter: how not to play football. After a terrible failed pass from da Silva, Arango got the ball and played a perfect pass on the left side of our half where Idrissou was running. Subotic made an 1+ amateur mistake and let Idrissou run him over just like that. He then drew into the middle and shot the ball into our goal. Weidenfeller did not look very lucky as well. 1:0 for the false Borussia. Unbelievable. The worst part of it all, somehow, it was actually like they deserved the goal. Obviously they didn't because we want them to go down hill, but in that game, they simply player way more clever than Dortmund did.

Only a minute before the first half was over Lewandowski did, what he has done so often this season. He failed a must-do-chance. After a perfect pass from Götze, Lewandowski appeared in front of ter Stegen, but instead of hammering the ball into the goal (whatever way), he shot it onto Gladbachs keeper who saved it well. Break. 1:0 for Gladbach. Nothing lost, yet. Frustruation- yes. 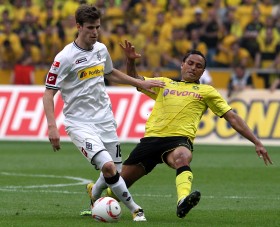 We have surely seen better first halves. But then again, we have seen worse as well and the positive aspect was, that we usually came back stronger. I wish I could tell you the same thing today. That we got stronger, more eager, better, that we actually scored. But all of that is only half true. Did we try harder? We sure did. Were we eager? Mostly, yes. Did we score? No. It wasn't our game. Of all teams, it had to be Gladbach that got in our way. They were now standing very strong in the defense, put all their effort in keeping those three so important points home. Dortmund on the other hand tried, rather less successful to somehow gather at least one point. First Hummels headed the ball over the goal in the 55th minute of the game, then Götze hammered a ball from a 20 meter distance right onto the crossbar. Sometimes, I have the strange desire to get an axt and take apart those stupid posts and bars. Annoying. After a bit more than an hour it was time for Zidan and Barrios to bring some more drive into the game. And while Zidan tried himself with a header, the quite strong playing Schmelzer thought: why not try a shot from the second row that no one is expecting. It almost worked. However, Gladbach also has an 18 year old talent in their rows. Their keeper ter Stegen caught a strong day and controlled the ball past the goal. That was it. No more chances, no more goals. We actually lost the game. 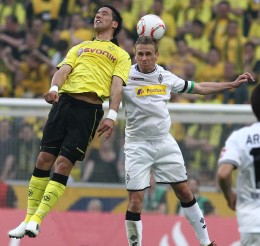 Not a lot of thoughts left after a game like that. It is again 5 points onto Leverkusen who have to play against Cologne next week. Our game against Nürnberg will probably not be the easiest one, but at least it is a home game and another positive aspect: Nürnberg still wants to achieve something. They will not create a strong defense wall and await the rest. They will push forward as well. We tend to play better against teams that are open in their game. It wasn't meant to be that day. I just hope they will get their act together and do what they do best next week. Stay calm and just play. Dear Borussia, don't try so hard. Play it easy, it's what you do best. As for that false Borussia from Gladbach. Please just go. Downhill.

And yet, there is one thing this game was good for: despite the fact that there will always be people ranting around if one game didn't go the way we had wanted it to go, a game like this is great for all those...erm...people who think winning the championship is the most self evident thing on the planet. It is hard work, and there is still some way to go. Stop planning for gods sake. Be patient, it happens when it happens.

Dear Borussia from Dortmund, we stay with you all the way. Whereever the road may lead us....