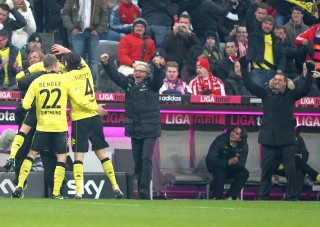 The busy worker bees have completed the golden honey. Their classy 3-1 away win at record champions Bayern Munich was their first since October 1991: Borussia Dortmund can already celebrate their own 7th German Championship. And we haven't seen March yet. 58 points out of 24 matches with only 2 losses tell the actual truth on any Bundesliga pitch so far.

The youngest team ever – age 22 - outplayed the arrogant but lazy hosts and literally grabbed the silver dish from the current holders. The giant clash was broadcast into nearly 200 countries worldwide and coiled by the Bayern-friendly mass media and blandly biased Sky Television. Most still sneer at the “Jugendstil” of the “premature team”. But the answer came philosophically simple like the double champion of 1956 and '57 Preissler branded: “Vital is on the pitch”.

In fact this top match has been decided in typical BVB fashion of this outstanding 2010-11 season: passionate touch-and-go attacks with technical brilliance led by Captain Nuri Sahin and Wunderkind Mario Goetze who beamed up from the second team into the German national squad. Up front world record scorer 'Pantera' Barrios opened the scoreline with one of his trademark box snap shots before Sahin curled from the D right into the shocked sight of the Bayern supporters and skipper Mats Hummels – a Bayern player on righteous exile – finished off with a perfect edge header from a corner below their away section. Mitchell Langerak – the first Aussie goalkeeper in the Bundesliga – who had to replace the injured clean slate footsteps of Roman Weidenfeller let slip the only goal by national striker Gomez but ruled the penalty area from attacks of the Schweinsteiger, Ribery or Robben. Former Captain Sebastian Kehl made his short comeback in the last five minutes after half a year of his tenacious groin plague. 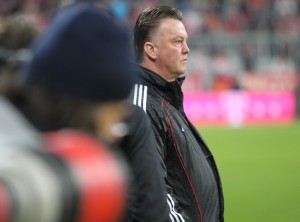 The home side's vicious tackles against Dortmund's vivacity were patiently overlooked by referee Graefe. In confusion the tourneur funnily dressed in the winners' former kit colours shortened the three minutes extra time to just a minute. His final whistle got lost in the triumphant roar of the ever strong following BVB fans who waved their replica trophies as the big laughing leaders of the pack.

Even without black and yellow glasses one must acknowledge that for decades no other Bundesliga team have dominated a whole season like Jürgen Klopp's hungry youngsters. Let alone the very Dortmund sides who won the double championships in 1995-96 and the 1997 Champions League coached by clever mathematician Ottmar Hitzfeld would hardly compete with the present. The style of play is as convincing as the signalling paradigm of a futuristic structure for any football club.

The mid-90s neon yellow millionfold shopaholicism of the Niebaum-Meier regime had almost bankrupted the only German sports club held as a public limited company in 2005. Only a few seasons later the tight-fisted rein of President Reinhard Rauball, Executive Director Joachim Watzke and Captain legend come Team Director Michael Zorc bears fresh fruits. They never transferred a player for more than five million Euros like the surprise bargain hero Shinji Kagawa. The Nippon wizard flew in from Japan's second division and made the merchandising department count the most sold jersey. During the winter break he broke his foot at the Asian Cup leaving a sad gap his teammates are minding to fill to keep the sunniest side of the league table. 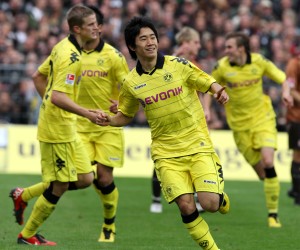 Every player is determined for his part that jolly coach Klopp wants them to be. He stranded twice in the Europa League before and after the group stages. But he learned his lessons well with this masterful season beckoning for the Champions League. Something they desperately need to lift the club's deserved status and centenary tradition. No extravagant luxury of astronomical accounts like the Man City or the Real CF or their arch enemies Schalke but committed grassroots labour and willing cooperation granted grand success nobody expected. Until now Borussia Dortmund play on properly as if they are haunted. Like the club's founding fathers who ran away from Trinity Church in Dortmund's Northern Quarter to play their beloved footie. But they are happily exclusive at the top.

One rumour tells of wheat beer making rounds in Dortmund's dressing room. The Bavarian beverage will surely be replaced by the original Westphalian brew that made the city famous. And surely the full capacity of 80720 and another half a million frisky supporters will toast to their terrific team after the final game on May 14. Before the official ceremony beerloads will surely be showered down the mighty 'Südtribüne', Europe's biggest still existing terrace. They always did it properly.

Guest authors express only their own opinions which must not necessarily correspond to the views of the editors of schwatzgelb.com.