Hello! It is good to be back - Kehl comeback - BVB II wins 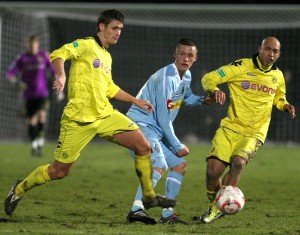 717 fans yesterday saw the comeback of Borussia Dortmund skipper Sebastian Kehl. Amongst those fans there were quite a few BVB celebs. With Jürgen Klopp, Teddy deBeer, Lars Ricken, Aki Watzke, Michael Zorc, Kevin Großkreutz, Mario Götze, Nuri Sahin, Mats Hummels, Patrick Owomoyela, Marcel Schmelzer and former BVB II star Sebastian Tyrala. Joining the party was the much hated Uwe Fuchs, who in the late 90s while playing for Arminia Bielefeld, finished the promising part of Lars Ricken’s career. While there were no fights to report between Ricken and Fuchs, the team got onto the water soaked potato field of the Rote Erde Kampfbahn to play Borussia Mönchengladbach II.

With Sebastian Kehl, who sported the number 50, Leonardo Dede and Mitch Langerak, who was announced as Michael Langerak, three pros started for BVB II. In the first half it was one way traffic towards the young ponies’ goal. Marco Stiepermann had a promising start and was all over the place for most of the first half. The right wing hammered two goals past the goal during the first few seconds of the match. But it was not until Marvin Bakalorz converted a free kick from Christian Eggert that Borussia’s Amas got the lead in the 22nd minute. But as the pros right now our second team was not able to convert good chances and thus it stayed 1-0 up until half time. 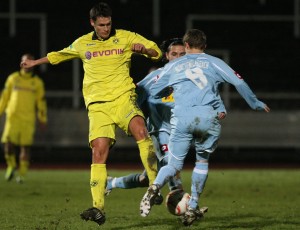 Usually matches like the match yesterday end in a draw and Mönchengladbach upped the tempo after half time but were denied several times by Langerak, the post or their very own inability to convert chances. A few Borussia Dortmund counter attacks could not really get the pressure of the defense. After 64 minutes the good full back Lasse Sobiech was substituted with a dizzy head and Sebastian Kehl, who had a quiet game in the holding midfielder position, replaced him there. Leonardo Dede had several good moments as well pushing the ball forward and winning nearly his entire one on ones. A Mitch Langerak slip then however made it 1-1 a few minutes before the end. But as the young Aussie was attacked while trying to grab the ball in the air , it was a no goal and nothing more than a minor slip.

Said Sebastian Kehl after the match: “It was a good test for me. I am happy to have played for 90 minutes and am a knackered now” and Michael Zorc added: “It was an important test for him, the deep pitch, 90 minutes, he was challenged by this.” Whether Kehl is going to be part of the squad against St.Pauli will be decided over the next few days. But it is good to see our skipper back and is also good to see Langerak and Dede in action.